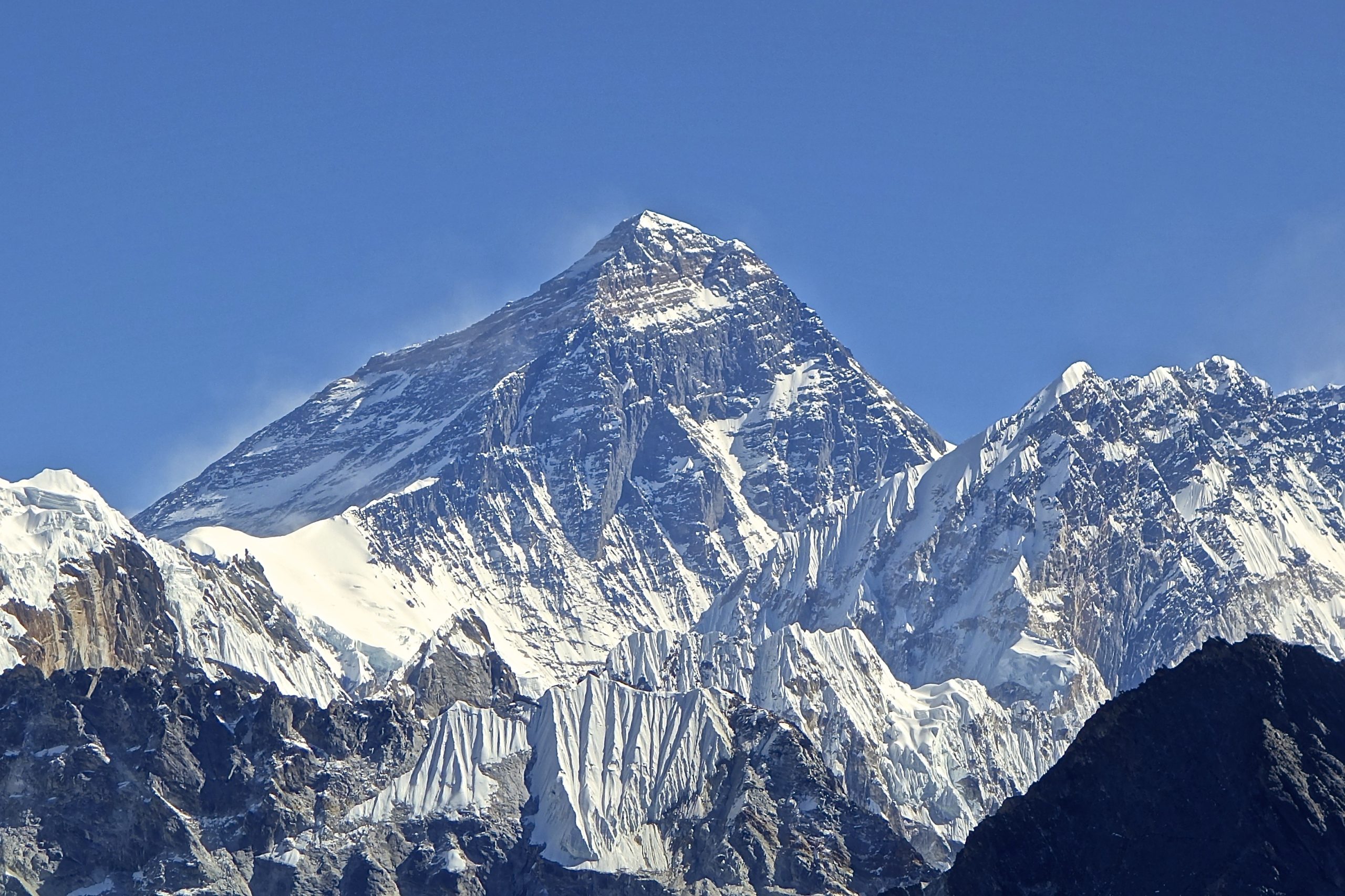 Among the various protected areas in Nepal, Sagarmatha National Park is one of these protected areas in the eastern Himalayas of Nepal. The National Park was established in 1976 with an area of 1,148 km2 (443 sq miles) in Solukhumbu district. Located at the highest elevation with its lowest point just over 2,800 meters, it encompasses dramatic mountains including the Mount Everest (8,848 m), Glaciers and deep valleys.

Sagarmatha is another name for Mount Everest. It is a Nepali word derived from two other words, Sagar meaning ‘sky’ and matha meaning ‘head.’ The name represents the glory of the Mount Everest which has increased our pride as high as the sky. Along with being home to the highest peak in the world, the National Park also includes other snow-capped mountains of the Great Himalayan Range with most of the mountains above 3,000 meters and some above 6,000 meters.

Sagarmatha National Park is popular not only for the breathtaking beauty but also due to the culture that prevails there. Some 6,000 Sherpas live in the surrounding 20 villages such as Kunde, Khumjung, Namche Bazaar, Thyangboche, Thame, Pangboche and Phortse. During the major tourist flow seasons, the Sherpas settle temporarily around the tourist trials. 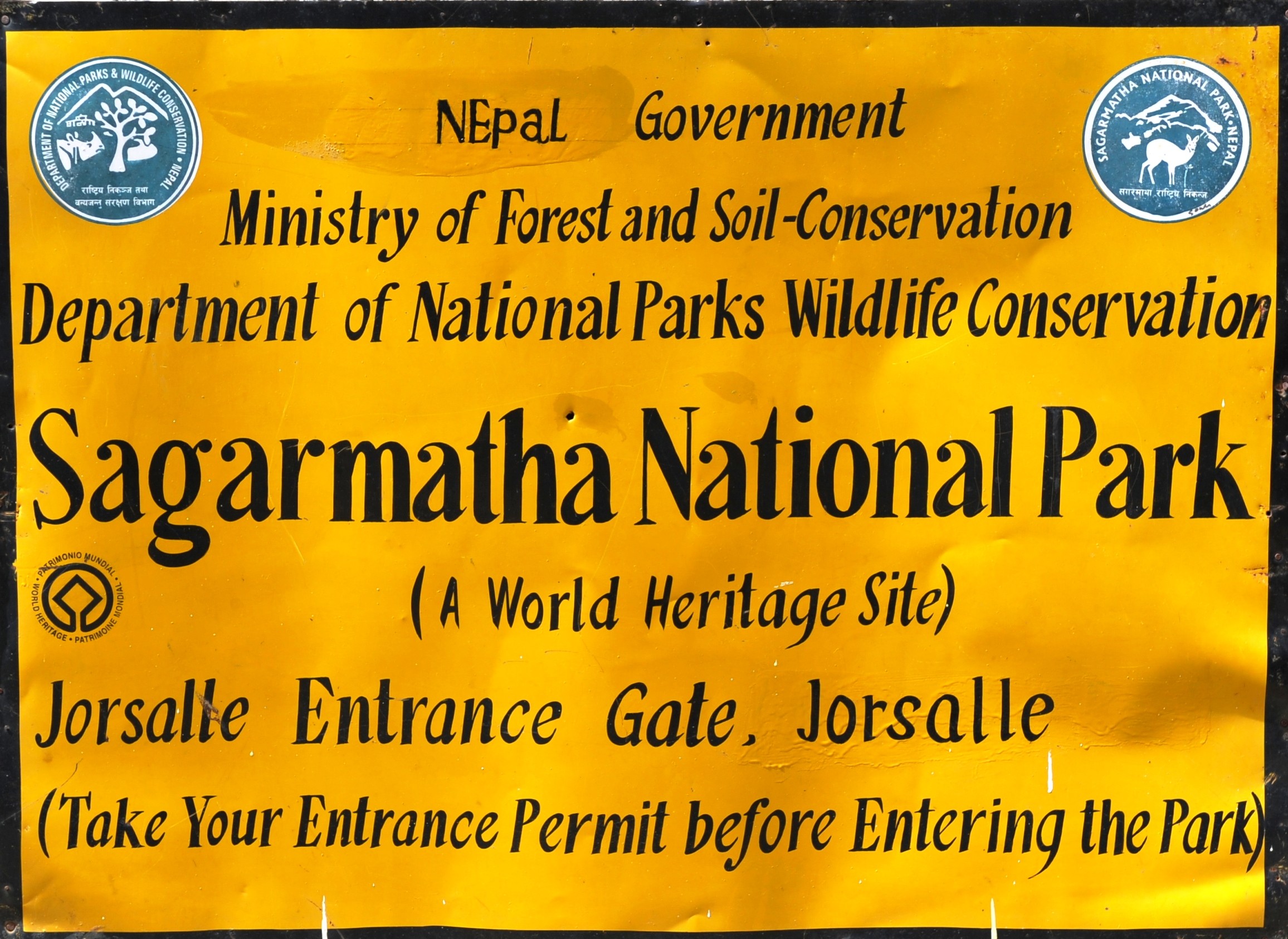 Giving continuity to the culture and religion of the Sherpa including the restriction of the hunting of the animals, and resource management has contributed to the successful operation of the National Park. With so much of the natural beauty, mountains and culture mixed up in an area, UNESCO listed Sagarmatha National Park in the list of World Heritage Site in 1979. The number of tourist in the National Park is in an increasing trend in the past. Beginning from almost 3,500 tourists in 1979, the park now welcomes 30,000 visitors every year,and thus tourism has become a major source of living for the local people.

Sagarmatha National Park is home to more than 118 species of birds that includes Himalayan monal, red-billed chough, yellow-billed chough, and blood pheasant. It also encompasses a large variety of rare mammals that include musk deer, snow leopard, Himalayan black bear,and Red pandas.  Other species include Tibetan snow cock, pheasant, Himalayan thars, Langur monkeys, and matrens and Himalayan wolves. Since the park is located at the higher altitude, the animals have adapted themselves according to the less oxygen environment. Thick coats and short limbs help to keep them warm and prevent body heat. Some animals like Himalayan black bears go for hibernation during the cold winter days.

The park is also a unique collection of various plants. The lower zone is a forest of brich, juniper, blue pines, firs, bamboo,and rhododendron. Moving upwards, the vegetation is slowed replaced by dwarf plants and shrubs and is limited to lichens and mosses in the higher altitudes.

A trip to Sagarmatha National Park will be ideal during March- Mid June and Mid-September-Mid December. The time is suitable because during the summer months (June to September) precipitation is very common and during the winter (December to February) the temperature during the day generally falls below 0°C, and heavy snowfall occurs.

The Everest Base Camp trek is the top priority for almost all the visitors in Sagarmatha National Park. The trek to Everest Base Camp is of about two weeks, starts and ends at Lukla which is known as the ‘Gateway to Everest.’ Starting from Lukla, a two-day trek up to Dudh Koshi will lead to Namche Bazaar.  Phakding and Monjo are popular as resting points,and there is the entrance to the Sagarmatha National Park at Monjo. After showing the permits at Jorsale, the trail continues uphill,and Namche Bazaar is where you stand after 3 hours. 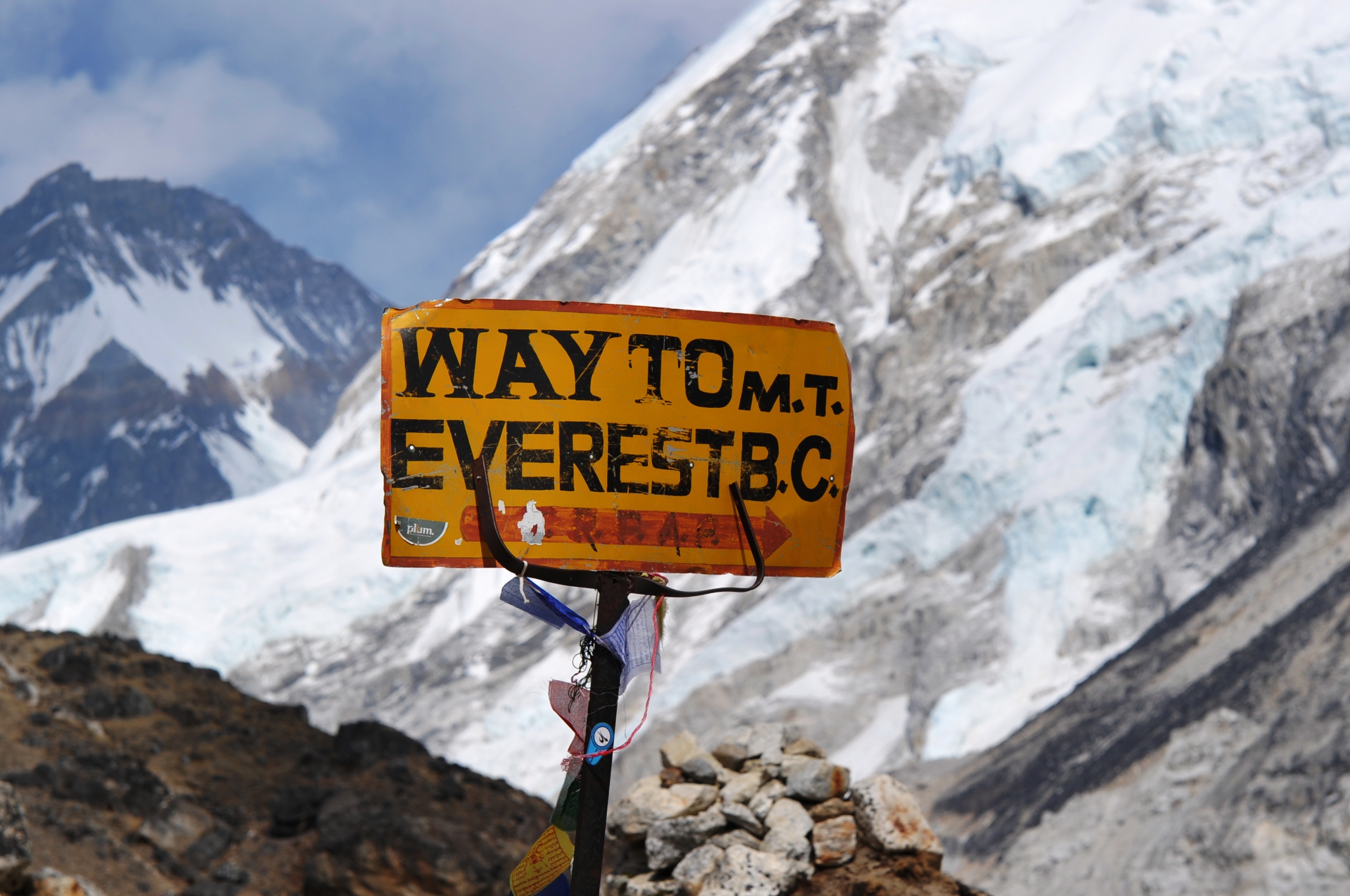 A couple of day’s acclimatization in Namche and the trail leads you to the valley of Imja Khola which offers magnificent views of mountains of Lhotse and Everest. A visit to Tengboche monastery is an option for the trekkers from Imja Khola.

Ascending from the Tengboche monastery through the Pangboche and Dingboche, the trek ends. From here about 6-hour walk to Lobuche and next 3 hours hike to Gorak Shep is where you end the trek. Above here one can also trek to Kala Patthar from where trekkers witness the spectacular view of the Mount Everest and several other peaks.

Shortest way for the Everest Base Camp Trek

Gokyo Lakes are the freshwater lakes in Nepal situated in the Sagarmatha National Park, at an altitude of 4,700 m – 5,000 m. The Gokyo Lakes contains six lakes among which Lake Thonak is the largest. The Gokyo Lake is also a Ramsar Site.

From Namche Bazaar, walking for around 5-6 hours, trekkers reach PhortseThanga (3,500 meters). Continuing up to Dole through the Rhododendron and the herd of mountain goats and musk deer, trekkers reach Luza (4630 m). Following the rocky trail and thorny bushes, trekkers reach Dudh Koshi valley which leads to Machhermo. Gokyo Lake is about 4 hours trek from Machhermo. Climbing through the Chorten ridge enjoying the view of Mt. Kangtega and Cho-Oyu, it reaches to Pangka. 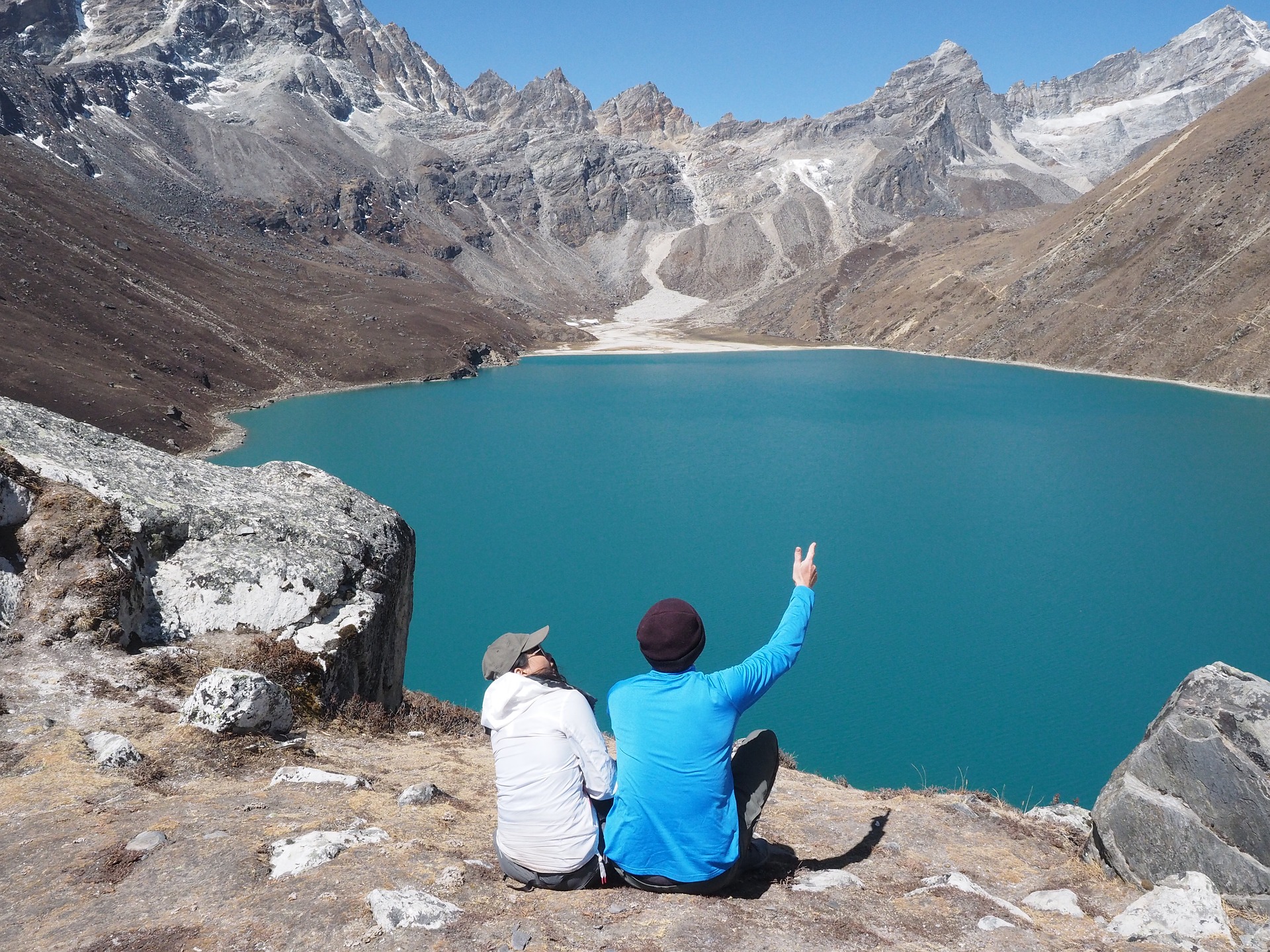 Crossing a bridge follows the first lake named Longpongo (4690 m) where trekkers can observe the Lama footprints in the rock. Taboche is the second lake in the region with an enchanting view of the blue water sheet sparkling in the sun. Next comes, the Dudh Pokhari, the third lake. The Gokyo village stands by this village.

30 minutes up the third lake and trekkers can view the Ngozumpa glacier, the biggest glacier of Nepal. Next comes, the fourth lake Thonak Tsho and the fifth Ngozumpa Tsho, which provide a spectacular view of highest peaks. Cho-you (8153m), Gyachung Kang (7922 m), Everest (8848 m), and Lhotse (8501 m) extend from the west to east, and Mount Makalu stands further way.

Island Peak also known as Imja Tse is the most popular peak for the trekking in Nepal. The main reason why it has become a favorite trek is that it is suitable for both the new and experienced climbers. Although located at an altitude of 6,189 m, Island Peak offers an amazing climbing experience which is not very challenging technically. Thus, a healthy and physically fit individual can make it up to Island Peak with a little or no experience of climbing.

In fact, the Island Peak is an extension of the ridge coming down off the southern end of the Lhotse Shar. As soon as you conquer the Island Peak, you will be overwhelmed with the same feeling as you are at the top of the world. To learn about the detailed itinerary of Island Peak, visit here. 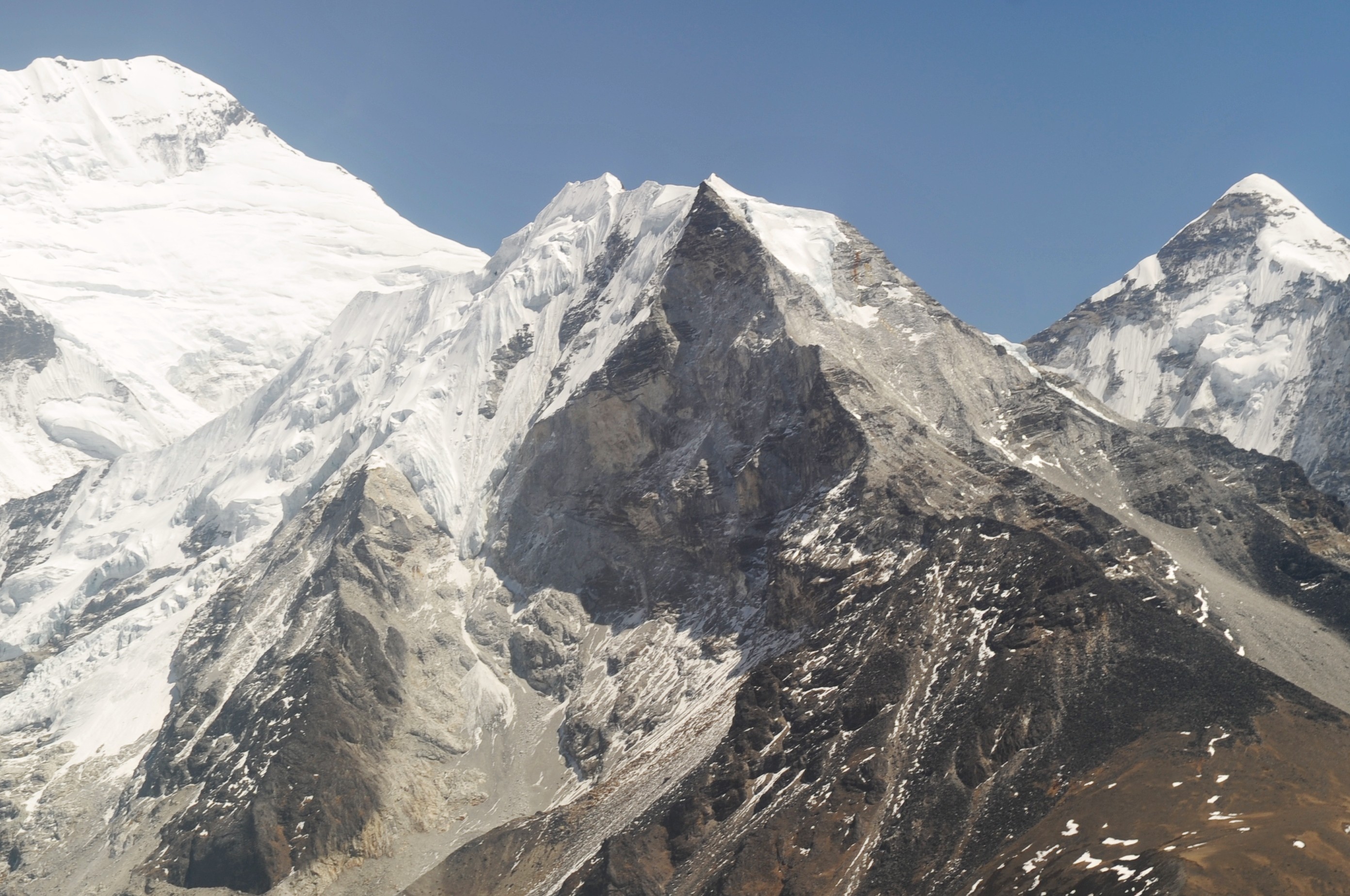 Everest High Passes is an excellent choice for someone who is looking for a challenging trek in Everest Region. One should cross the three high passes namely Kongma La Pass (5535 m), Chola Pass (5420 m) and Renjo La Pass (5340 m) in one trek. The Everest high passes leads you along the less traveled route to Everest Base Camp with challenges like high altitude and rocky terrain. But it also offers trekkers with the magnificent views of Mt. Everest, Mt. Lhotse, Mt. Nuptse, Mt. Thamserku, and Mt. Ama Dablam. Also trekkers will experience the lovely Sherpa people, their village and their culture.

Experience the thrilling and Classic Trek to Everest Base Camp Followed by Kongma, Chola and Renjo La Pass

As soon as you arrive Lukla, you will start your trek to Phakding and then to Namche Bazaar. Taking the first glimpse of the Mt Everest, crossing the suspension bridges and passing through the beautiful pine forest, you will reach Dudh Koshi and then finally up to Phakding. Ascending up from Phakding, trekkers now stand on Namche Bazaar, the gateway to the Everest. Crossing the beautiful rhododendron forest you will now reach to Tengbuche. Along the Sherpa settlement, Debuche is only 15 minutes away from Tengboche. Hiking approximately 2 to 3 hours hike leads to Pangboche which further leads up to Dingboche. From here, one can observe the eye-catching view of the Ama Dablam Mountain. 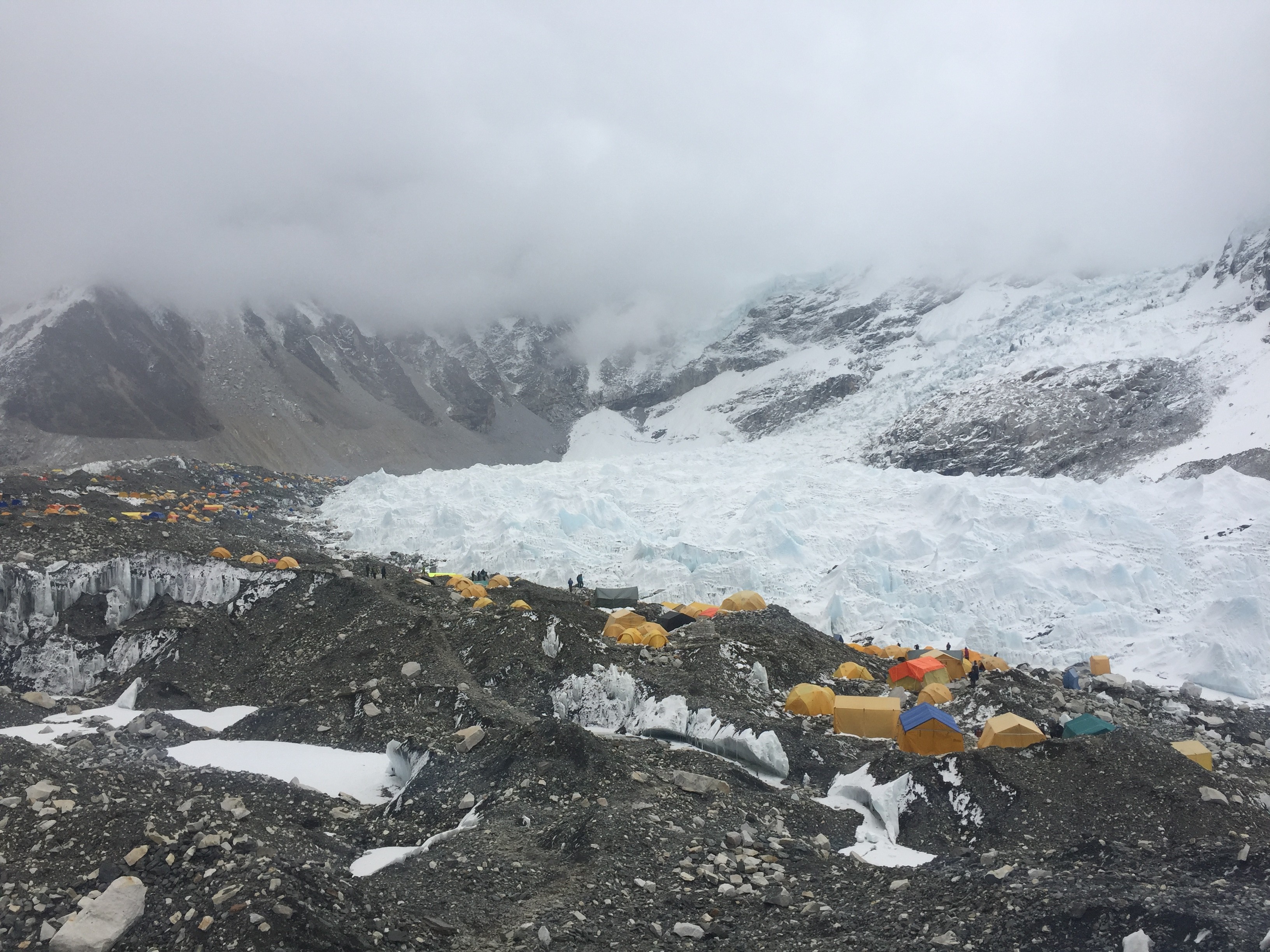 The Khumbu Glacier is a very exciting place to explore during the trip to Sagarmatha National Park. The glacier is almost 17 km long and is the highest glacier lying at the altitude of 4,900 meters in the Khumbu region of north-east Nepal between Mount Everest and Mount Lhotse-Nuptse ridge. The glacier is followed to the final part of the trail to Everest Base Camp. The Glacier starts in the West Cwm near Everest. There is a large ice fall called the Khumbu Icefall in the Glacier. 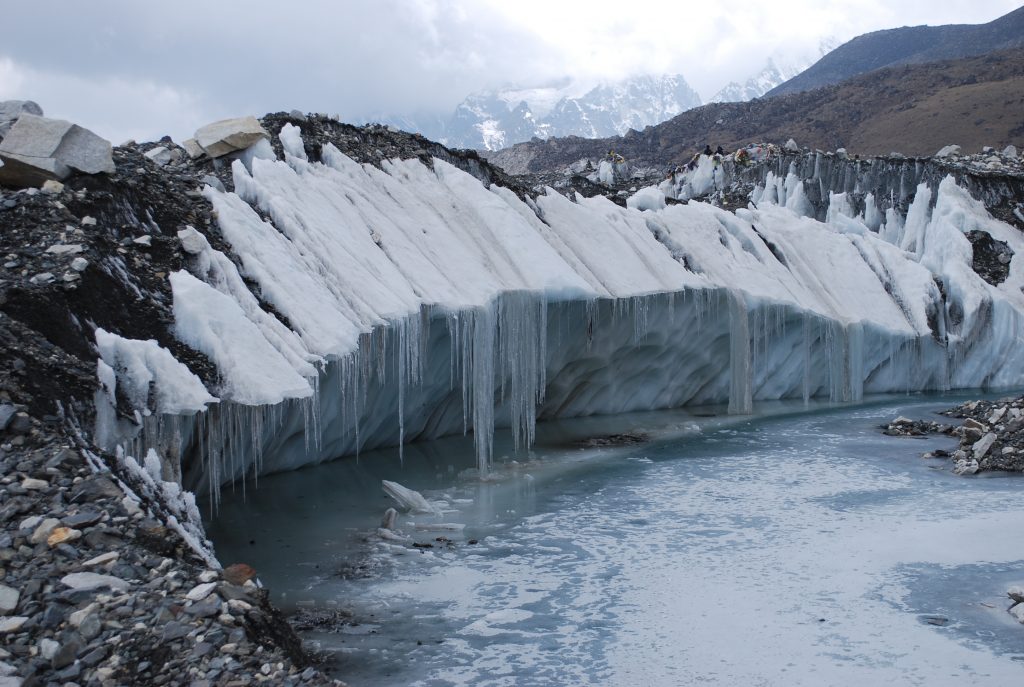 The Khumbu ice fall is terrifying but still a beautiful place when you reach there. The conquering of the ice fall is a real challenge and dangerous adventure. The ice fall is moving continuously with varying speed and sometimes leaving crevasses. Large ice blocks can also be another challenge for the trekkers.

Starting your trek early in the morning while it is still dark is a good idea. It is because, once the sun comes up, it is too hot and may dehydrate the climber. The glacier also becomes less stable during the daytime. 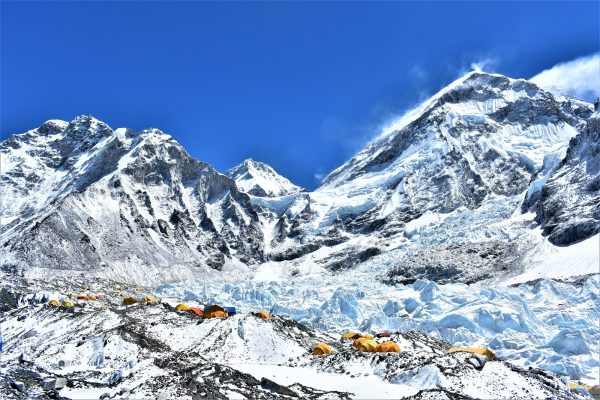 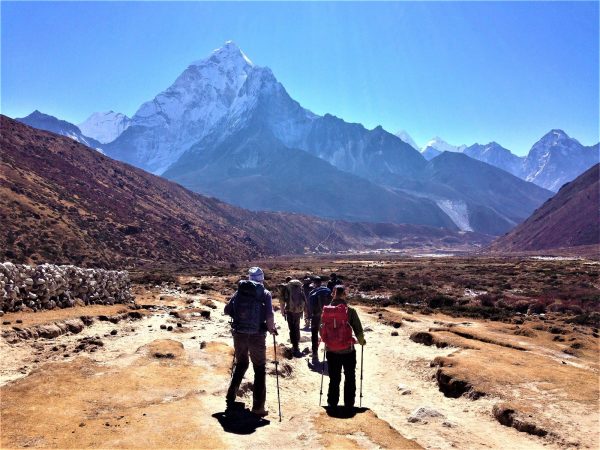 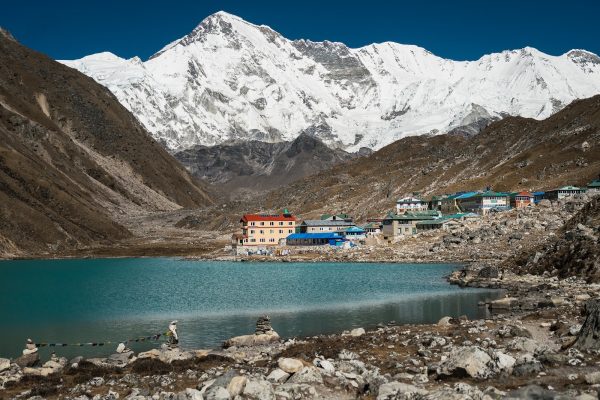