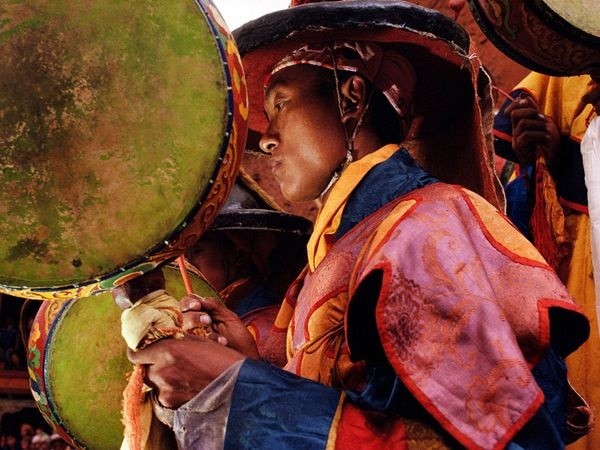 Mani Rimdu Festival: The sacred festival of the Everest region

Nepal is not only home to the almighty Himalayas and lush hills, but it is also a destination that drenched in charming culture. These cultures and traditions are deeply influenced by spirituality and religion.

Nepal celebrates many festivals depending on religious, ethnicity and castes. Not only has our ethnicity decided the festivals we celebrate, but the region where we belong too.

Offering fascinating insights into the religious beliefs and ancient customs, these celebrations also let travelers enjoy significantly and enriching interactions with the locals.

Overflowing with vibrant colors, sacred customs and primeval rituals, these festivals, and cultural celebrations are once-in-a-lifetime opportunities for travelers and will make any trip to Nepal unforgettable.

The festivals offer a glimpse into Nepal’s ancient history, culture, and rich heritage; and while the majority of Nepal’s festivals are cultural ceremonies, there are also certain celebrations that are specific to certain cities or regions.

Amongst numerous festivals, Mani Rimdu Festival is the most iconic and interesting high Himalayan cultural festival observed annually in the Everest region. This Himalayan festival has delighted several trekkers throughout the year, who still wanted to observe it.

In addition, the festival happens right in the autumn season, which is one of the most popular trekking time of the year. If you are planning to undertake trekking to the Everest region then grab the opportunity to witness this festival. It is a very interesting and perfect festival to combine with a trekking expedition in the Everest region.

Are you interested to participate Mani Rimdu Festival in November?  If so, you can choose to venture one of the following treks:

Everest Base Camp trek with comfort

Alternatively, if you are pondering to trek in lower Everest then Pikey peak trek is the ideal one. One can join Mani Rimdu Festival Trek in Chiwong Monastery.

What is the Mani Rimdu Festival?

Mani Rimdu is a traditional festival passed on from the mother monastery of Tengboche monastery, the Rongbuk. The festival is a re-creation of legendary events; the establishment of Buddhism in Tibet by the great saint, Guru Rimpoche/Padmasambhava.

Mani Rimdu is the worship of Phakpa Chenrezig, the god of Compassion and the locals believe that his blessings bring peace and good luck to the region. One of the rituals invokes the blessings of the God of Compassion on the rilbu, the long-life pills.  “Mani Rimdu” comprises two words, ‘Mani’ means “part of the chant of Chenrezig” (A Bodhisattva who symbolizes all the compassion of Buddha) and ‘Rilbu’ or ‘Rimdu’ means small red pills that are blessed during the festival. The red pills are purified repeatedly during the festival and then distributed among attendants of the festival.

These sacred ceremonies are a series of events of empowerment. It is a sequence of 19 days festivities, which culminate with the last three days allotted as a public display of the festival.

When and where Mani Rimdu Festival does take place?

As per the Tibetan lunar calendar, the Mani Rimdu festival observed from the first day of the tenth month which takes place between October –November. The chief lama of the Tengboche monastery announces the dates of the festival. This year the festival celebrated on 12th, 13th and 14th November 2019.

The festival is widely celebrated in the monasteries of Tengboche, Chiwong, and Thame of the Everest region.

The main site for the Mani Rimdu festival is at Tengboche Monastery (3867 m). Perched in Tengboche village, it is the biggest monastery in the Everest region.  In 1916,  Lama Gulu constructed the monastery with strong connections to its mother monastery called the Rongbuk Monastery in Tibet.

Furthermore, the remarkable aspect of Tengboche Monastery is that it is situated in the Sagarmatha National Park, a UNESCO World Heritage Site surrounded with a breathtaking backdrop of majestic renowned snow-clad peaks comprising Everest, Nuptse, Nuptse, Tawache, Lhotse, Ama Dablam, and Thamserku.

What happens during the Mani Rimdu festival?

Mani Rimdu festival is a time where Sherpa and Tibetans get the opportunity to gather and rejoice together with the monastic community. People of the surrounding region gather around in a monastery for 5 days (for the welfare of the world) to celebrate the festival.

The main first day of the festival comprises prayers, second day for an interesting monk dance performance. The final day involves some hilarious dances and chanting prayers. When the festival concludes, and all prayers make their leave, the monks carry out a fire rite to disperse all troubles and evil of the world. The ceremony encompasses prayer, 16 ritual dance with interludes of comical effect, fire rituals and feasts.

Before exhibiting the ritual dance, the monk take oaths at an empowerment ceremony with Truslshig Rinpoche. They have to go through the preparation of festivals such as Sand Mandala, the Empowerment, and the Fire worship.

The festival initiates with a decorative portrayal of the Mandala drawing made with color sand collected from the sacred hills.  The colored sand used to prepare mandala and create a  fine-looking design that is highly emblematic in nature.

It signifies the palace of Garwang Thoze Chenpo (Lord of the Dance). The protective defensive blade signifying deities kept around the mandala while sacred Mani Riluwa pills bowl placed above the center.

Monks chant the ceremonial mantras constantly during the weeks of the ceremony before the public festival. During meditation, they visualize compassion flowing in the form of the mantra, into the Mandala and the Mani Rilwu pills and empowering them with kindness.

It usually takes four days to construct mandala and covered. This mandala is significant for the religious festival that continues for the next 10 days.

The Wong is the opening public ceremony carried out on the full moon day, of the tenth month in the Tibetan lunar calendar.  The holy and sanctified Mani Rilwu (sacred or blessed pills) and Tshereel (pills for long life), then distributed to spectators and attendees by Trulshig Rinpoche.

The Chham (dances) exhibits on the second day of Mani Rimdu. The monks dressed up in brocade gown and wonderfully decorated masks. The elaborate mask symbolizes the old ghosts.

Then sequence ceremonial Lama Dances depicts the victory over demons, dispersed, to Dharma Protectors, as positive forces clash with those of chaos. The dances express Buddhist teaching on numerous levels from the simplest to the most philosophical.

During the dance, the monks are thought to turn out to be a divine being. The dances performed during Mani Rimdu regarded to be holy, and not for ordinary amusement.

The six dancers exhibited the dance portraying a tantric magician known as Ngag-pa. Throughout the performance, they offer tormas and alcohol from silver vessels to numerous deities such as Yidam (personal deity) and Khandro (wisdom dakini), as well as to Shi-Dak (Earth deities) and the Lama (spiritual guide).

A crucial theme in Tibetan Buddhist practice is to make offerings to these beings so that they will support the righteous actions which lead to Buddhahood.

The next dance depicts the Four Protecting Ghings, who are defenders of the Buddhist religion. Among four, two of the Ghings are women who carry drums whereas the other two are males carrying cymbals.

The males signify skillful means and the female denote wisdom; these two aspects are made-up to help in achieving enlightenment.

Each dancer wears magnificent vibrant paper masks exhibiting a continuous smiling expression.  Their dances are musically escorted by the beating of cymbals.

The priests performed the Dakini dance pleasantly. They executed dance in a gentle motion dance steps, keeping perfect time with the soft jingle and relaxed beat of bells and drums in their hands.

The dancers without masks represent female spiritual figures; consorts of Padmasambhava. There is a belief that they originate from his pure land of Shangdok Palri where they reside in his mandala. They symbolize the forthcoming arrival of Guru Rinpoche at the Mani Rimdu.

The fire rite carried out in the yard once the three-day public festival concluded, and the viewers returned to their home.

The fire ceremony is an offering to Agni (the god of fire), and to the Gods of the mandala. The harm imagined as liquefying into the grain and burned the butter. Subsequently, the sand mandala dismantled and give as an offering to the serpent gods (Nagas). Thus, the 19-day Mani Rimdu completed partaking bestowed numerous with pills and blessings for long life, bliss, and success in the future.