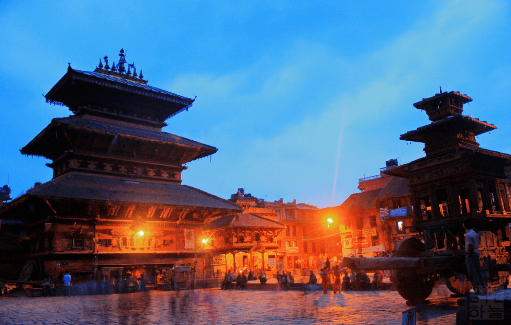 Nepal is a small country with an area 1, 47,181 km2 and yet manages to be a home for marvelous and unique sites. The uniqueness of Nepal in culture and traditions has always made Nepal a country with something special and charming. The country was never colonized by any powers of the world and the unity in diversity has reflected the greatness of the country all around the world. The diverse ethnic groups have their own languages, cultures and traditions, art and architectures. This varied culture, tradition has lead to the different architectural monuments all over the world.

World Heritage Day is celebrated every year on 18th April. This day is also called the International Day for Monuments and Sites. The celebration of the World Heritage Day has a primary motive to raise awareness about the importance of the historical or cultural heritages within our surrounding. Realizing how much important role these sites play in human history, UNESCO adopted a convention that discusses the Protection of the World Cultural and Natural Heritage, on November 16, 1972. Till date, UNESCO has identified more than 100 of heritage sites and listed these places in the list of World Heritage Site list.

Pashupatinath is one of the four most important religious sites in Asia for the devotees of Shiva. The temple was built in the fifth century and is the largest temple complex in Nepal spread across 246 hectors. The temple stretches on both sides of the Bagmati River. Apart from being a religious site, the Pashupatinath Temple is a perfect combination of art and culture. The temple was listed in the list of UNESCO World Heritage Site in 1979.

The temple allows only the Hindus to enter the main temple. That does not mean that foreigners are not allowed to enter the whole premises. The other buildings are available for the foreigners to visit. The main temple of the Pashupatinath has a Shiva Lingam in its interior and outside is the large statue of Nandi, the bull which is the transport of Lord Shiva. The temple is a cubical construction with a bunk roof and a golden spire at the top. There are a total of four main doors to the temple, which is all built with the silver sheets.

There are numerous temples in the periphery of the temple that includes the temple of Bhuwaneshori, the Dakshinamurti, Tamreshwor, Panchdewal, Bishwarupa, and many others. All these temples have their own set of rituals to be performed. There is a forest named Shleshmantak, on the other side of the river which is home to monkeys and deer. For the maintenance of the Pashupati area, Pashupati Area Development Trust (PADT) was established by Late King Birendra Bir Bikram Shah in 1996. This administrative body looks after all the activities related to the Pashupatinath area. 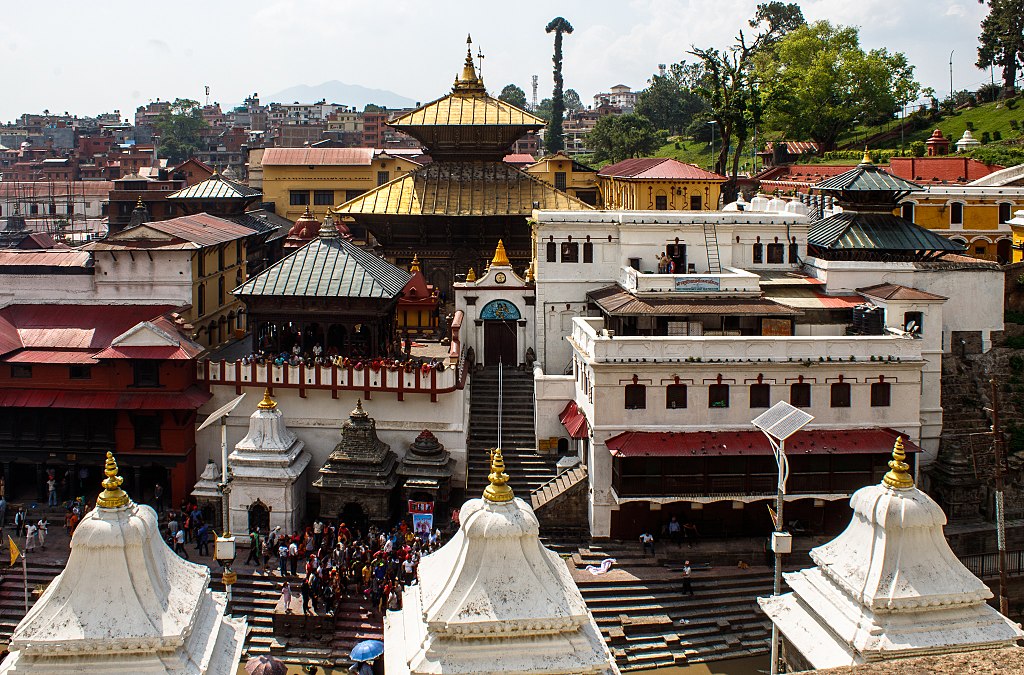 Swayambhunath is one of the most ancient religious architectures nestled at the top of the hill in Kathmandu valley. The temple is also known as the monkey temple because of the abundant number of monkeys roaming around the temple.

According to the ancient legend, the valley was filled with a large lake. A lotus grew out of the lake and thus the valley was named Swayambhu, which meant, ‘self-created.’ The stupa has a large dome at the base with two eyes above it, and the thirteen pinnacles on the top. The dome indicates the entire world, the two eyes represent the wisdom and compassion that drives one away from the bonds of the world leading to enlightenment and the pinnacles are the representation of the saints who have to go through thirteen stages of spiritual realization to gain enlightenment.

There are a lot of Chaityas, temples, and images of the deities in the surrounding area. There are prayer wheels all around the stupa. Also, Shiva lingams are present in the area which is now disguised as Buddhist Chaityas. Swayambhunath is a holy place not only for the Buddhists but also for the Hindus because the Hindus regard Gautam Buddha as a manifestation of Lord Vishnu. There are lots of devotees visiting the place particularly during Buddha Jayanti: the birthday of Gautam Buddha. 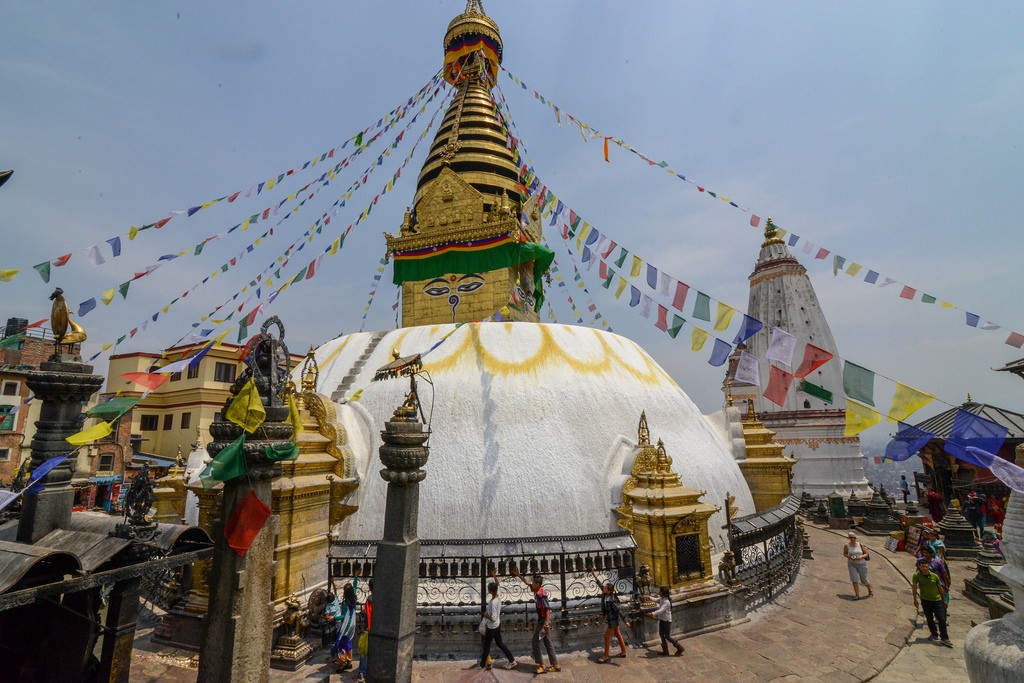 Bouddhanath Stupa is one of the largest stupas in the world. Located in the northeastern outskirts of Kathmandu, the stupa is the reflection of the Tibetan culture in Kathmandu. UNESCO listed the Bouddhanath stupa as a World Heritage Site in 1979. The stupa was supposed to be built in the 14th century.

The aerial view of the stupa looks like a big Mandala. At the bottom of the stupa, there is a boundary of the 16-sided wall. There are numerous prayer wheels which are engraved with the mantra- ‘Om Mani Padme Hum.’ There are also three large platforms at the base, which are decreasing in size which represents earth. One can listen to the chanting of the devotees while walking around the stupa. The thirteen rings at the base are the representation of the path to the enlightenment.

Above the base, is the square shaped tower that has the Buddha eyes in all the directions. A question mark instead of the nose is the symbolization of the number 1 inNepali that reflects the unity. There is another eye, the third eye, which is a symbol of the wisdom of Buddha. A 13 steps pyramid stands above the square tower, which indicates the path to enlightenment. The colorful flags are tagged at the top which holds the prayers and the mantras.

Kathmandu Durbar Square known as Hanuman Dhoka Palace is one of the major attraction of Kathmandu valley. The palace is named after the Hindu god ‘Hanuman’ which is believed to be the protector of the whole palace.

The palace is filled with many temples most of which date back to the 15th to 18th century. The Durbar Square has two sub-areas; the inner complex comprises of the temples like Nasal Chowk, Sundari Chowk, Basantapur Durbar and the outer complex contains Kumari Ghar, Kasthamandap, Shiva-Parvati temple, Big bell,and Jagannath. The festivals like Indra Jatra, Dashain, Gaijatra and the Machchhindra-NathJatras are the major attractions of the place. 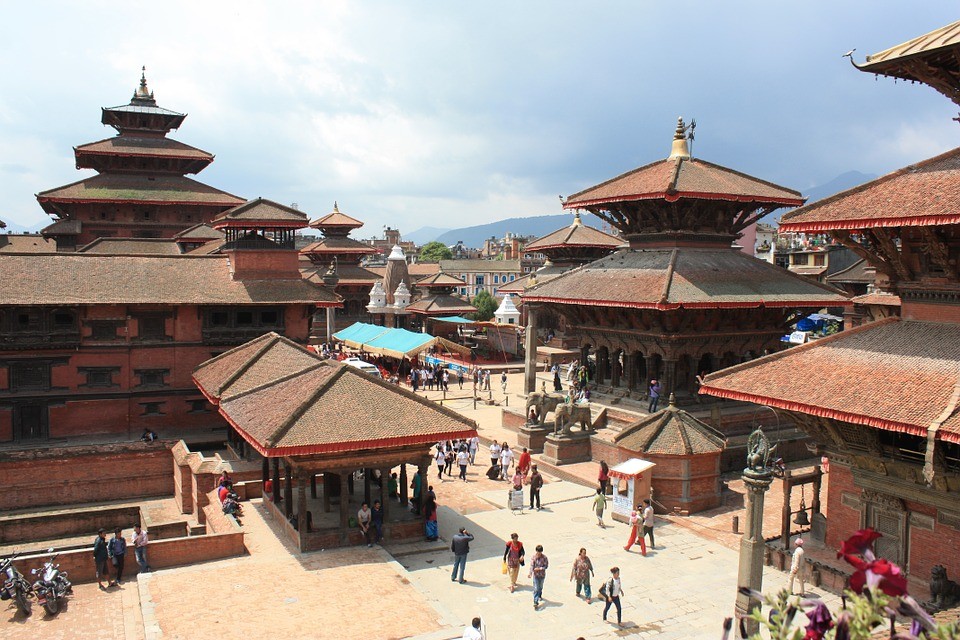 The Patan Durbar Square is located at the center of the Lalitpur. The major attraction of the Patan Durbar Square is the Krishna Mandir which was built in 1637 with 21 gold pinnacles in the temple. Also, the Durbar square has an Ancient Royal Palace, where the kings of the Lalitpur resided in the past. Patan is a historical Buddhist city and now is a center of both the Hindus and the Buddhists with 136 bahals or courtyards and 55 major temples. 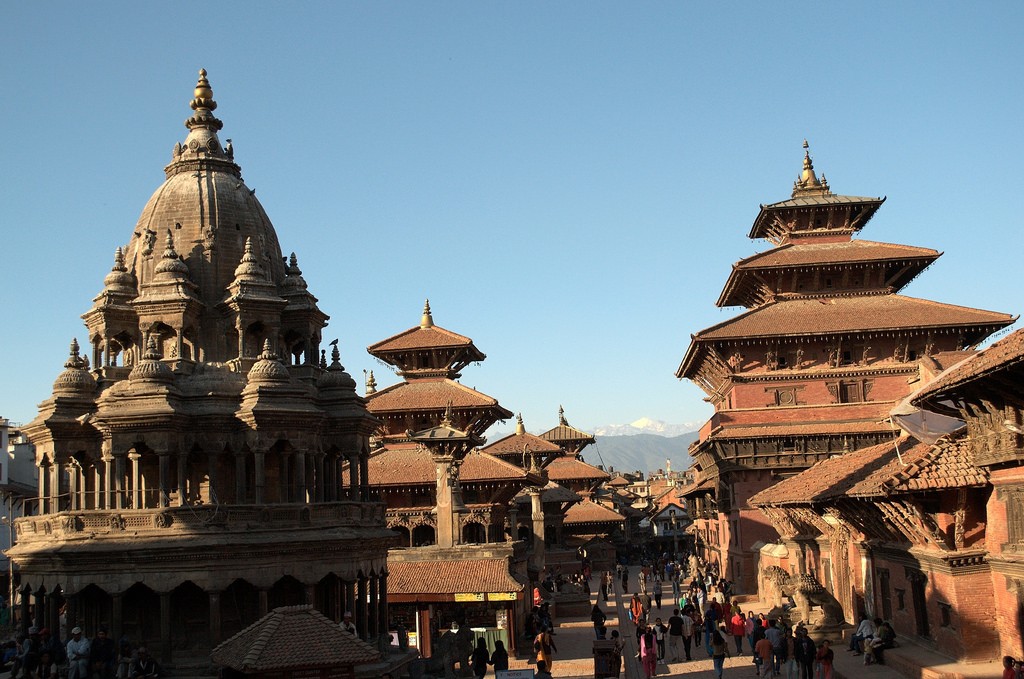 The major attractions of the Bhaktapur Durbar Square are the 55 windows palace (55 Jhyale Durbar), Nayatapola temple, a statue of the BhupatindraMalla, BhairabNath temple, Golden Gate, Lion’s gate, Mini Pashupati temple and many more. 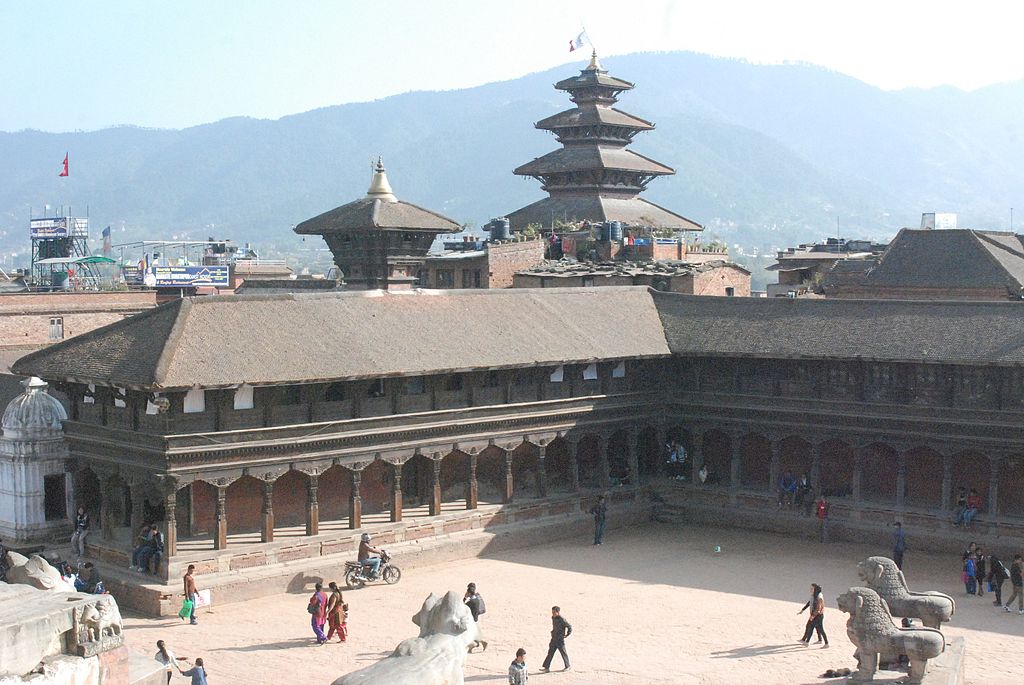 The Changu Narayan Temple is one of the oldest Hindu temples which are still in use in Kathmandu valley.  The temple lies on the hilltop called Changu and Dolagiri which is about 7 miles or 12 km east of Kathmandu. There is a statue of Lord Vishnu inside the temple and is most probably the oldest temple in Nepal. The temple has many pieces of the 5th and 12th-century art and surrounded by the beautiful green forest. The Historical Pillar, a statue of BhupatindraMalla, a sculpture of Shreedar Vishnu, Vaikuntha Vishnu, Vishworup and Kaileshwor are the attractions of the Temple. 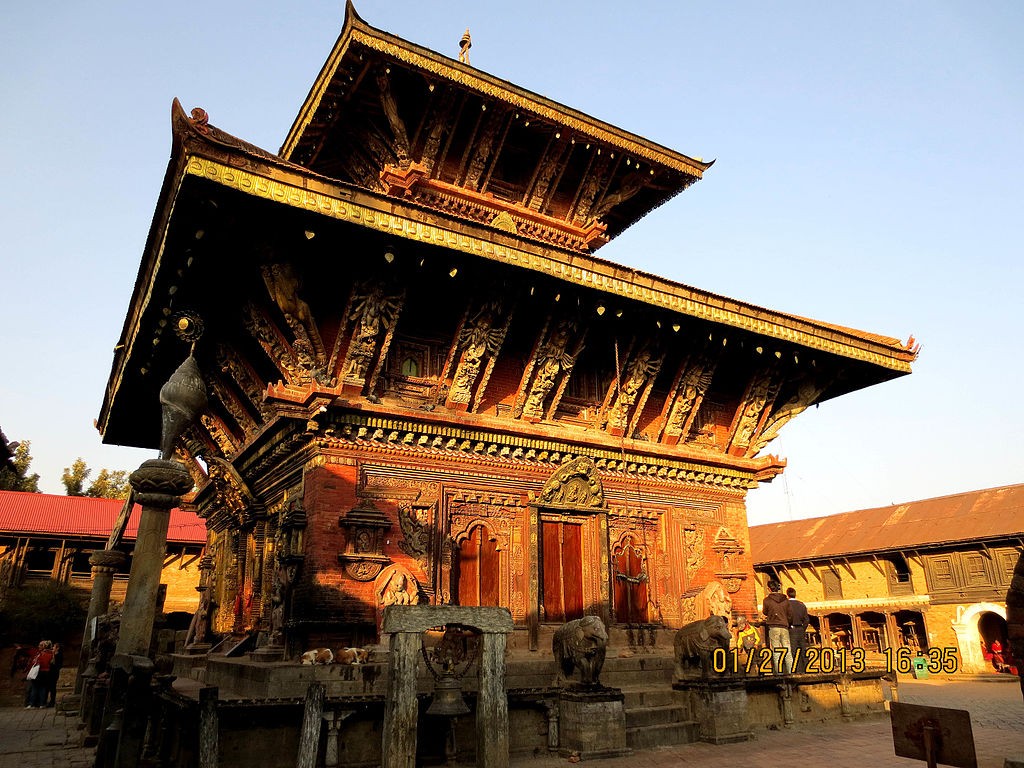 Lumbini: the Birthplace of Gautam Buddha

Lumbini is the biggest Buddhist pilgrimage site where Gautam Buddha was born in 623 BC. Lumbini was listed in the World Heritage Site on 1997. The Lumbini is a place from where the Buddhism all started. The Mayadevi Temple reserves the exact spot of the birth of Lord Buddha. There are many monasteries built by the different Buddhist countries from all around the world. The ever-glowingflames, the Ashoka Pillar, the Puskarni pond, sacred garden are the major attractions of the Lumbini. The Lumbini also preserves the seven steps the baby Gautam Buddha took as soon as he was born. 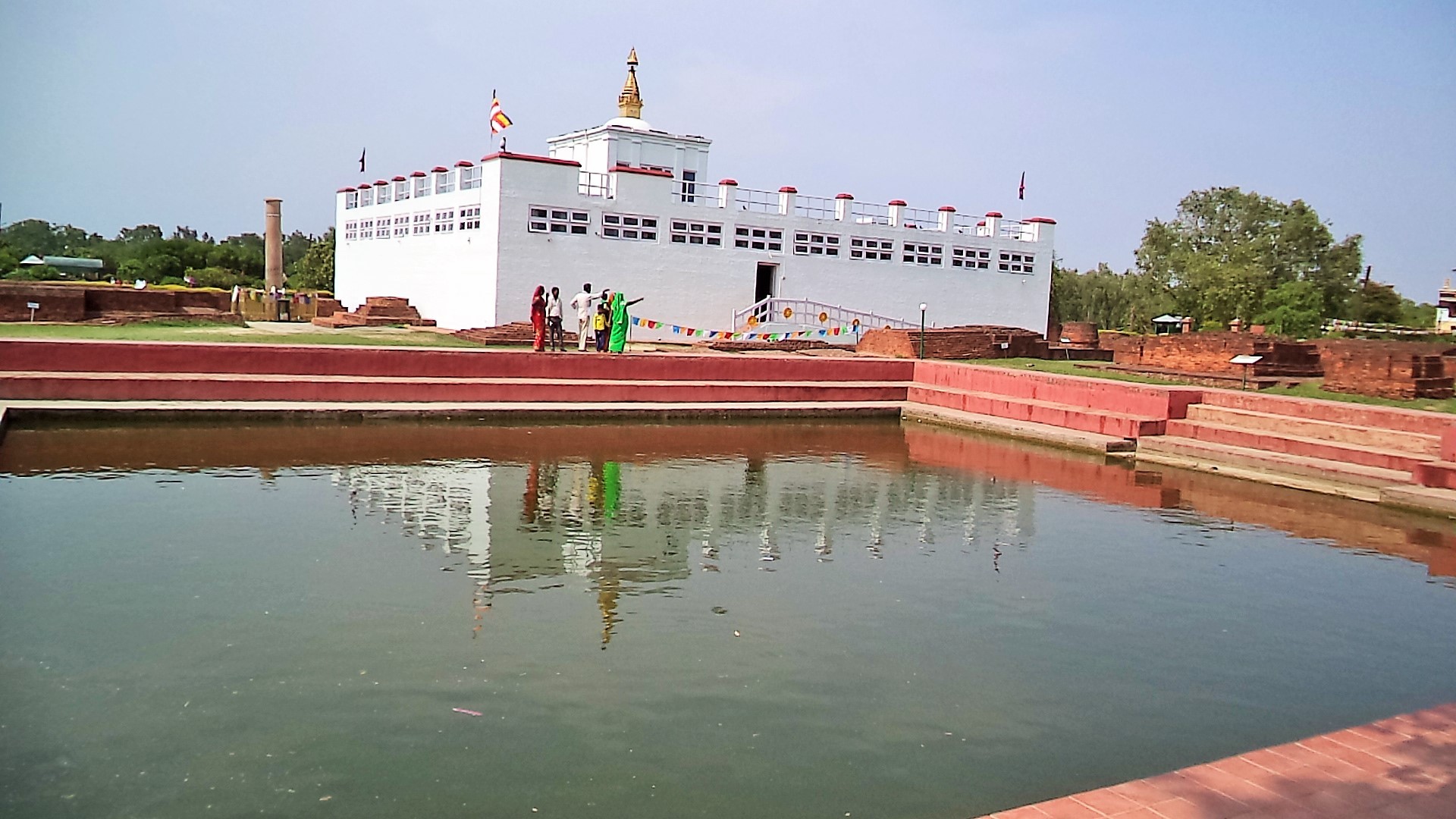 The first National Park of Nepal; Chitwan National Park was established in 1973 and included in World Heritage Site in1984. The Chitwan National Park has an area of 932 km2 and is home to many endangered species. The National Park is particularly famous for its conservation of one-horned rhinoceros. Four different species of deer including the spotted deer, leopard, sloth bears, wild boar, Langur and rhesus monkey, wild cats and many more species are found in the park. Along with the numerous animals,it is home to, the National Park is also a preferred destination for the ornithologists since the National Park harbors more than 450 species of bird species. Some of the species include woodpeckers, hornbills, Bengal florican, Red-headed trogons and many more. The swampy lakes areas and the lakes are home to the marsh crocodiles.

Experience the Wilderness in the Chitwan National Park 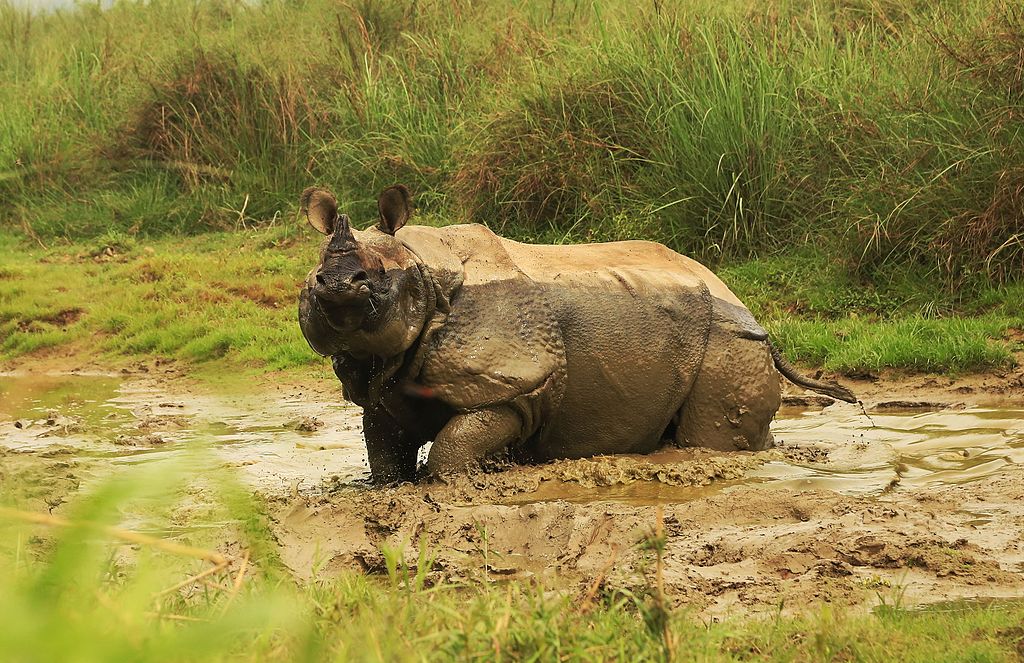 Sagarmatha National Park situated at the Solukhumbu district is home to the world’s largest peak, Mount Everest. The name is derived from two Nepali words, Sagar means sky and Matha means head. The park was established in 1976 and was later recognized as an Important Bird Area by the BirdLife International. The National Park consists of 118 species of birds which includes Himalayan monal, Tibetan Snow cock,blood pheasant, red-billed chough and yellow-billed chough. The Park has also been home to numerous rare mammal species like musk deer, snow leopard, Himalayan Black Bear, Red Panda, etc. 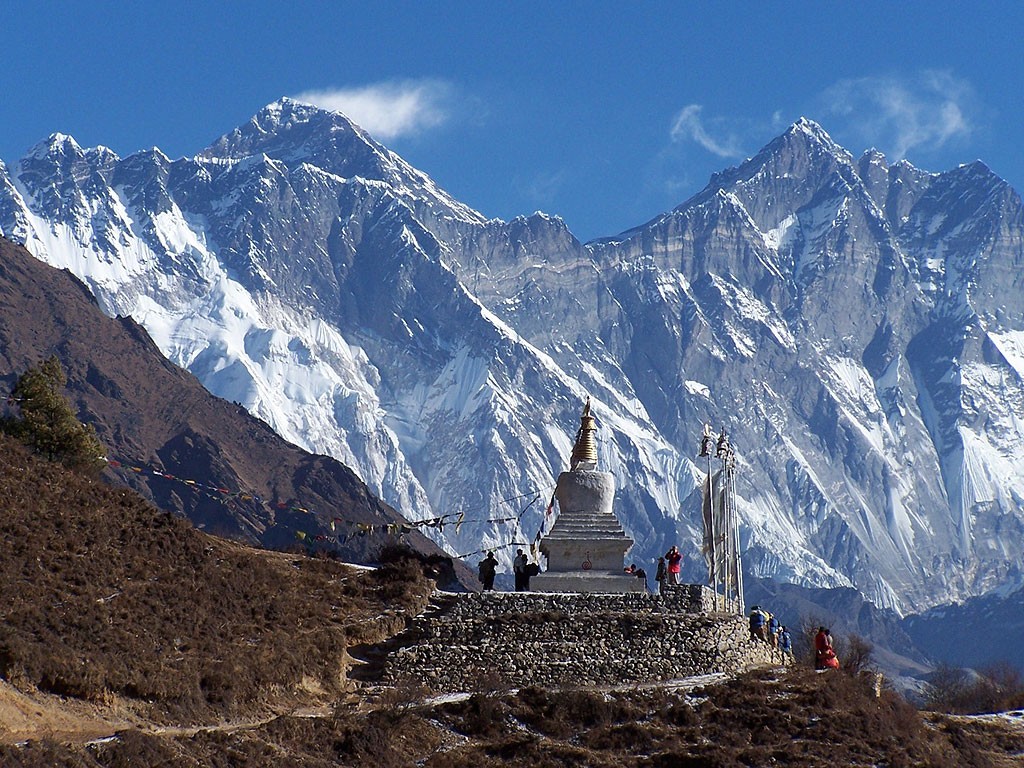 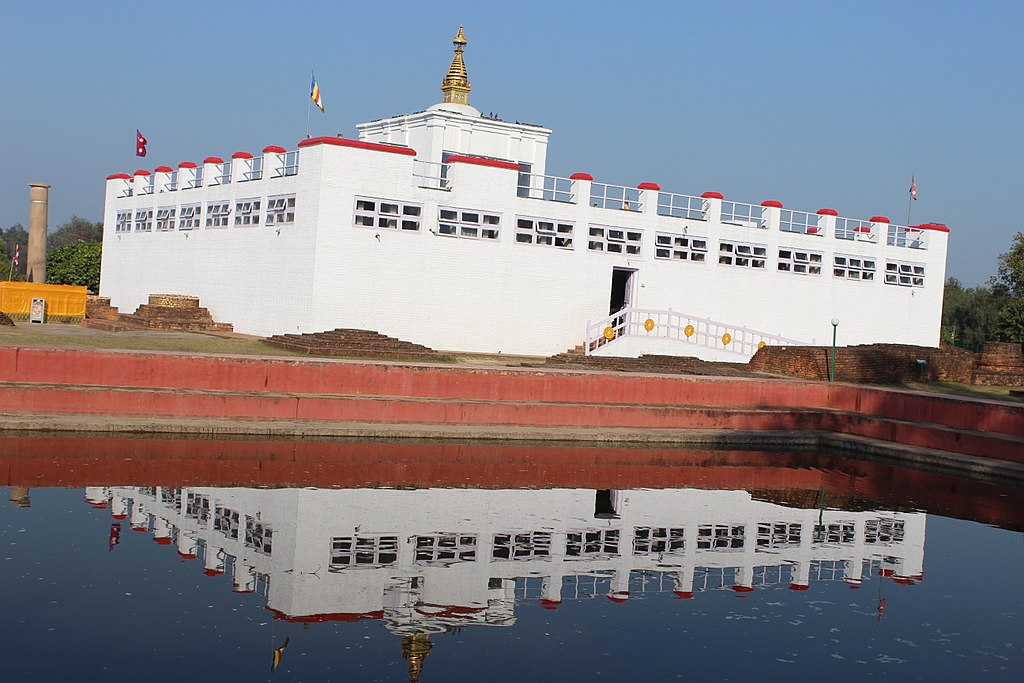