When you see the rugged paths, remote and untouched life, the white turbaned Dhami with silver bangles in hand and golden rings in-ears, the centuries-old Chaupadi tradition, you will realize how far you have reached from the modern world. Welcome to Far West Nepal: a secret in Nepal that has not been explored, known and visited in spite of the potential to become a major tourist destination in Nepal.

Far West Nepal is a precious land: home to kindhearted people living in the most unique landscape of our planet. The far west is a storehouse of amazing landscapes and the unique ethnic groups. But still, there are a lot of not explored and unseen aspects of the area to the world. Maybe this is because the place lacks basic tourism infrastructure and other means of accessibility to the region like transportation.

Far west Nepal offers a beautiful combination of landscapes, tradition, culture, and lifestyle, and remote communities. So, gear up to explore the best secret of Nepal before the crowd out there finds out about the beautiful place.

The Far West region of Nepal is somewhere adventure seekers should go. Organized and managed tourism is only limited to gentle hills and pastures, but there is still much to discover in the far west. For example; the Chamar’s Dasain where the bulls fuelled with rice-wine and marijuana fight for their sovereignty, as a result, the loser becomes the dinner and the winner one gets a chance to enjoy a year with the cows.

Trekking in the Far West takes the trekkers through the land untouched by the progress of time. It feels like you have really traveled back to the time when life was remote and isolated. The trekkers will pass the ancient orange and lemon trees, and the medieval villages. The spectacular mountain views are not to be missed. The trail ensures with the experience of the massive mountains, alpine meadows, fertile lowlands and the pristine lakes with a wide range of unique biodiversity.

Having the off-beaten-path as a specialty, Far West Nepal will give the trekkers with the true taste of nature, wilderness and culture.

Far West Nepal is certainly the new destination in Nepal. Being untouched and unexplored, the region holds a beautiful and undisturbed nature. The Shuklaphanta National Park with the largest herd of Swamp Deer, the beauty of the alpine meadows, forest, the lakes at Khaptad, and the trails on the bottom of the mountains such as Mt. Api and Mt. Saipal will take the trekkers another step closer to nature. The Far West offers tourists with various kinds of experiences in different seasons. With an area of 19,539 sq km, the westernmost region of Nepal ranges from wildlife variation in Terai, beautiful hills in the mid-hills and the glorious mountains in the Himalayan. The Far West is where the trekkers can experience the real trekking taste when Nepal first opened up to the world.

Far West – For the Wilderness

The Far West is most probably the best destination to explore the wildlife of the country. The dense subtropical forests in the Terai are home to numerous flora and fauna. Likewise, Far West Nepal is an exciting place to be for jungle safari. Tourists can have the privilege to wander around the dense jungle riding on the back of an elephant or go for a jungle safari in a four-wheeler. Nature walk, bird watching, and canoeing will take the tourists to a closer view of the wildlife. Shuklaphanta Wildlife Reserve and the Bardia National Park await the tourists with their amazing wildlife composition. The endangered great Indian rhinoceros and the Bengal Tiger roam around the forest of Terai. The Gharial (fish-eating crocodile), the four-horned antelope, the swamp deer, the striped hyena and the Dolphins of the Ganges River add an extra adventure in the region.

Far West – For the Culture

Far West Nepal is a reserve to authentic and impressive culture. The ‘Raute’ tribes in the Far West still live in the hunting era. They hunt and gather their food and are moving from one place to another. The cultural diversity is maintained by the Tharus in the Terai, the Hindus in the hills and the Tibetans in the mountains.

The Terai will offer the tourists with the opportunity to explore the rural Nepalese life and the Tharu culture. A tour around the villages on foot or on the bullock cart is nowhere else experience of the lifestyle and the agricultural practices of the local people. The musical instruments, the local dance and the cultural events will blow your mind off. The traditional Shamanism (a witch doctor) is still alive in the local area.

The Far West is sometimes called a ‘Doti region.’ The people also say that the origin of the word came from the word ‘Dovati’ which means ‘the land between two rivers.’ Some also believe that the place is the origination of the Hindu god Dev and the word aatavi means ‘the place of creation.’ The story dates back to the 13th century when Niranjan Malldeo founded Doti kingdom after the fall of Karyuris Kingdom.

The Limi valley is a least visited remote valley in Humla district. Dominated by the Tibetans, the Limi valley trek is a beautiful trek a mountain trekker should not miss at all. The yak pastures, cultivated land, rivers and the waterfall in the remote and lost valley fill the trek with adventure and fun.

The beautiful Tibetan villages, the prayer flags and Mani stones and the monasteries reflect the Tibetan culture and the prevalence of Buddhism in the area. The old Rizing Ling Gompa (100 years) connects the Humla and the Tibet. The Dhungkar Choezom monastery, Namkha Khyung Dzong Monastery, The Jang’s Falgeling Monastery, and the Ya Yip Phuk cave are the reflection of the Tibetan culture and beliefs of the valley.

Although the trek might be a little more challenging, the beauty it offers overcomes all the challenges of the trek. The highest point of the trek Shinjungma (3,620 m) will offer the trekkers with an enchanting view of the Mt Saipal and Mt Kailash. 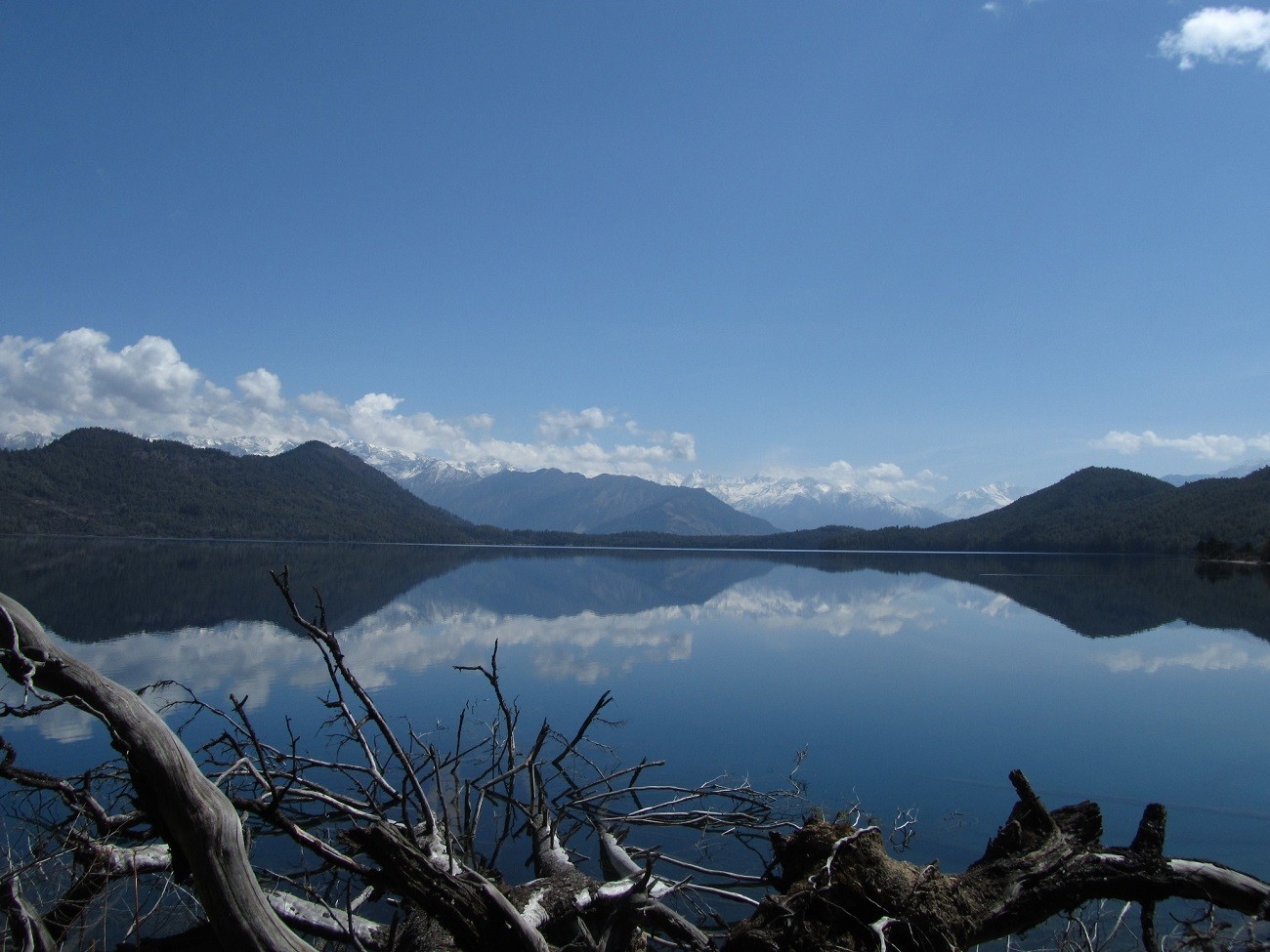 Rara Lake, located in the Mugu and Jumla districts of Nepal, is the largest and the deepest freshwater lake in Nepal. The lake is oval in shape, stands at an altitude of 2,990 m and covers an area of 10.8 sq km. Rara Lake is a major attraction of the Rara National Park. The lake is also called ‘Queen of Lake’ maybe because of the beauty of the lake and is a Ramsar site.

The Rara Lake is a favorite travel destination not only for the foreigner but also for the internal tourists of the country. Being located in the periphery of the national park, the Rara Lake is home to a number of animals and plants.

Trekking to the Rara Lake will offer the trekkers with the chance to explore different species of flora and fauna that includes birds, mammals, and different species of fishes in the lake. The heavenly scenario of the deep blue sky, the lush forest, and the snowcapped mountains around the lake will take anyone deep into nature. The large lake with the clear water that mirrors the sky and the clouds is not less than a piece of heaven.

Api Himal (7,132 m) is the highest mountain in the western region of Nepal. The amazing landscape, cultural diversity, real wilderness experience, the rivers originated from the mountains and the lush forests are the major attractions of the trek.

The beautiful off-the-beaten trail will take the trekkers through the beautiful landscape, Mahakali valley, steep gorges, wild rivers, waterfalls, beautiful forests, high alpine pasture areas and the mountains of course. The trek is a great opportunity to experience rural mountain life as well as explore the mixed Hindu and Buddhist culture.

Trekkers will enjoy camping during the trek. Although there are some lodges for the comfort of the tourist, the lodging cannot be guaranteed because of the remoteness and the tourist flow.

Other Places to Explore in Far West Nepal

Ghodaghodi Lake is a wetland located in the western highway in Karnali. The lake is extended over the length of 1.83 km and covers an area of 2,563 hectares. The Ghodaghodi lake ecosystem is the natural habitat to many species of mammals and birds. The studies have recorded 388 species of vascular plants: five Pteridophytes, 253 dicots and 130 monocots. Likewise, many species of endangered and vulnerable species find their home around the lake. These include Bengal tiger, Smooth-coated otter, Eurasian otter, swamp deer, lesser adjutant stork, marsh crocodile, red-crowned roofed turtle, and three-striped roofed turtle.

The Badi Malika temple located at the altitude of 3,800 meters in Bajura district, is a temple dedicated to the goddess Bhagwati. According to myths, when Lord Shiva wandered around the earth by carrying the body of Sati Devi, her shoulder fell in the Malligiri Mountain. The Malligiri is later called Malika.

Malika Chaturdasi is the major festival that the temple celebrates. The two priests serve the temple. One of them is the representative of the Kalikot district while the second priest is from Bajura. The devotees believe that the one who prays at the temple will get their wish fulfilled. There are also fairs in the temple during Ganga Dashara and Janai Purnima: The thread changing festival.

This fort is of historical importance. The fort lies ion Dadeldhura district and is concerned holds back the history of the unification of Nepal by King Prithvi Narayan Shah. In the early 19th century, General Amar Singh Thapa fought the English from this very fort. The fort served as the military base for the Gorkhali soldiers.

One response to “Far West Nepal: Towards Nature, Wildlife and Culture”