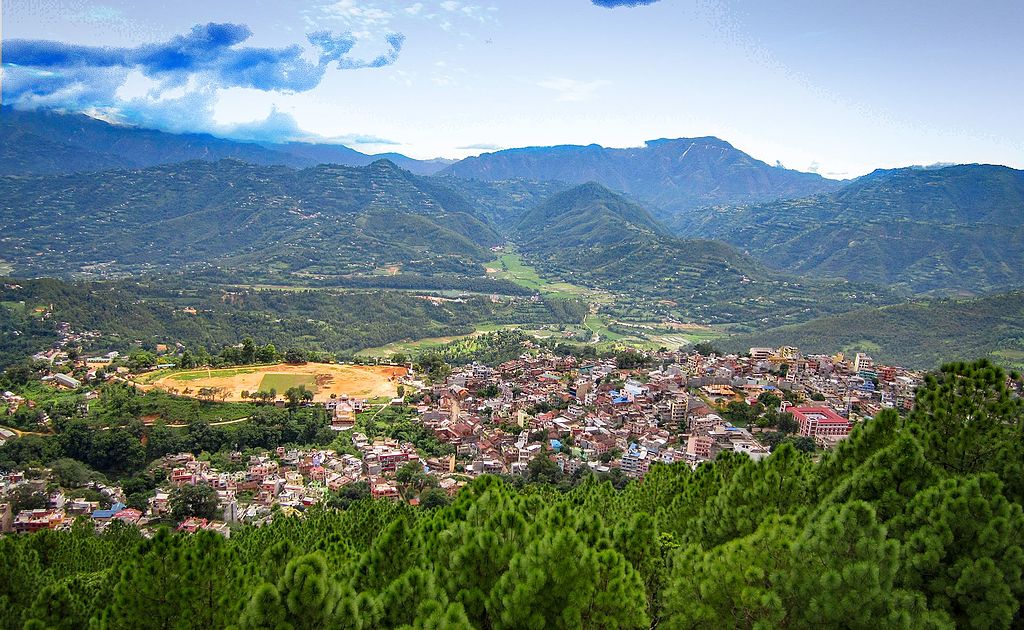 In the lap of Shreenagar Hill and above the Kali Gandaki River on the road between Butwal and Pokhara, Tansen is the hiding treasure of Nepal. Tansen is popular among the tourists for sightseeing and hand-loom products. Tansen, popularly known as Palpa, is the administrative center of Palpa district and lies on the slope of the Shreenagar Danda at an altitude of 1,343 meters.
Along with the sightseeing activities, Karuwa and hand weaved Dhaka is the special product of the place. The Nepali topi (national cap) is made from Dhaka.  The Newars and the Magars are the majority of the inhabitants with some mixed Brahmins, Chhetries, Bhojpuri, Tharu, Gurung, and Tamang people.

Before the unification of Nepal, Tansen was the capital of Tanahaun inhabited by the Magars. Tanahaun was one of the most powerful states that it was close enough to defeat Kathmandu under the leadership of Mukunda Sen. However, it became a part of the Shah Kingdom in the 18th century and Tansen became a Newari Bazaar and established a trade route between India and Tibet. Being an administrative center, Maoists targeted Tansen several times during the Nepalese Civil War, including a major assault on the historic Durbar (palace) in 2006. Now, Tansen is the headquarters of Palpa district.

Getting up to Tansen

Places to visit in Tansen

Tansen Durbar is located at the center of the town. This palace is also known as the Singh Durbar of Palpa. This was the palace of the provincial governor built in Rana Style. Built in 1972 by Pratap Sumsher Jung Bahadur Rana, the Tansen Durbar is the heart of Palpa that attracts many national and international tourists. The Durbar of The Durbar is a representation of the ancient art and crafts of the ancient Palpa. Tansen Durbar is a four-storied ancient building and has 64 rooms which comprise two meeting halls, and two minarets on two sides. The main entrance or the main gate of the Durbar is called ‘Baggi Dhoka’. The gate is the biggest gate in the whole country. 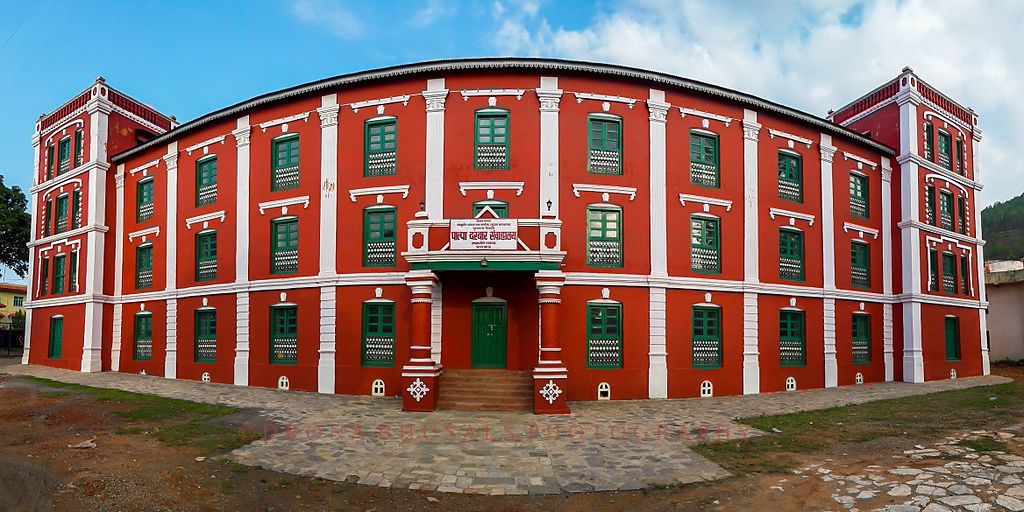 Excited to Explore the Ancient art and Craft of Palpa?

Tanahu is a beautiful hilly town. It is only about 32 km southeast of Tansen and is linked by a road. The hill offers visitors the views of the mountains and valleys. Tanahu also offers beautiful natural forests and farmlands.

There is an ancient palace in Ranighat in Palpa which is called Rani Mahal. The palace rests calmly on a large rock and at the bank of Kali Gandaki River. Governor Khadka Shamser built the palace in memory of his wife Tej Kumari. The monument is said to be built as a symbol of the love of the king and is a masterpiece of architecture.  The Ranighat is also called the Taj Mahal of Nepal. The second-largest suspension bridge in Nepal also lies here. 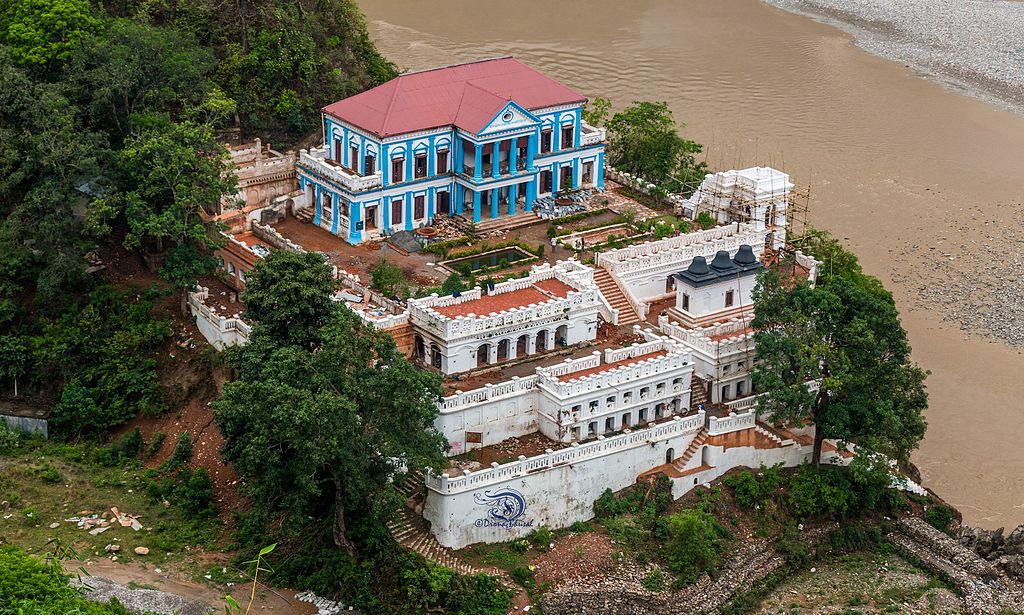 Tansen Bazaar lies at a high altitude and is one of the busiest bazaars in Nepal. One can witness the old Rana buildings, Newari-style houses, carved windows, and pagoda-style temples.

Srinagar Danda is a hill north of Tansen. The hill lies at an altitude of 1600 meters. Srinagar is a very famous destination point for sightseeing. The hill offers a beautiful view of the Langtang and the Annapurna mountains in the east with a dense pine forest on the southern slope and the Rhododendron on the Northern slope.
Srinagar Danda is the best place to relax and have some quality time in peace. The view of the green hills around the hill is very beautiful and calm. On a clear day, the pleasant view of the snow-capped mountains steals the heart of many visitors in the area. These snow-capped mountains include Dhaulagiri, Nilgiri, Annapurna, Himchuli, Machhapuchhare, Manaslu, Ganesh Himal, and others.
The Srinagar Danda is also popular for the sunrise and sunset views. The view of the sun rising and setting between the mountains is worth watching. The time in Srinagar will be a quality amount of time anyone will spend.

The Amar Narayan Temple is a classical wooden temple built in Pagoda style. The first governor of Tansen, Amar Singh Thapa built the temple in 1807 AD. The temple has beautiful carvings in the woods that reflect the history and architecture. The Amar Narayan Temple is regarded as one of the most beautiful temples outside the Kathmandu valley. There is a one-meter-long stone wall that surrounds the temple. The wall is locally called the “Great Wall of Palpa.” Inside the architecture lie the temple of Lord Vishnu, a natural spring, and rest houses. The temple is filled with the devotees during the morning and evening part of the day. 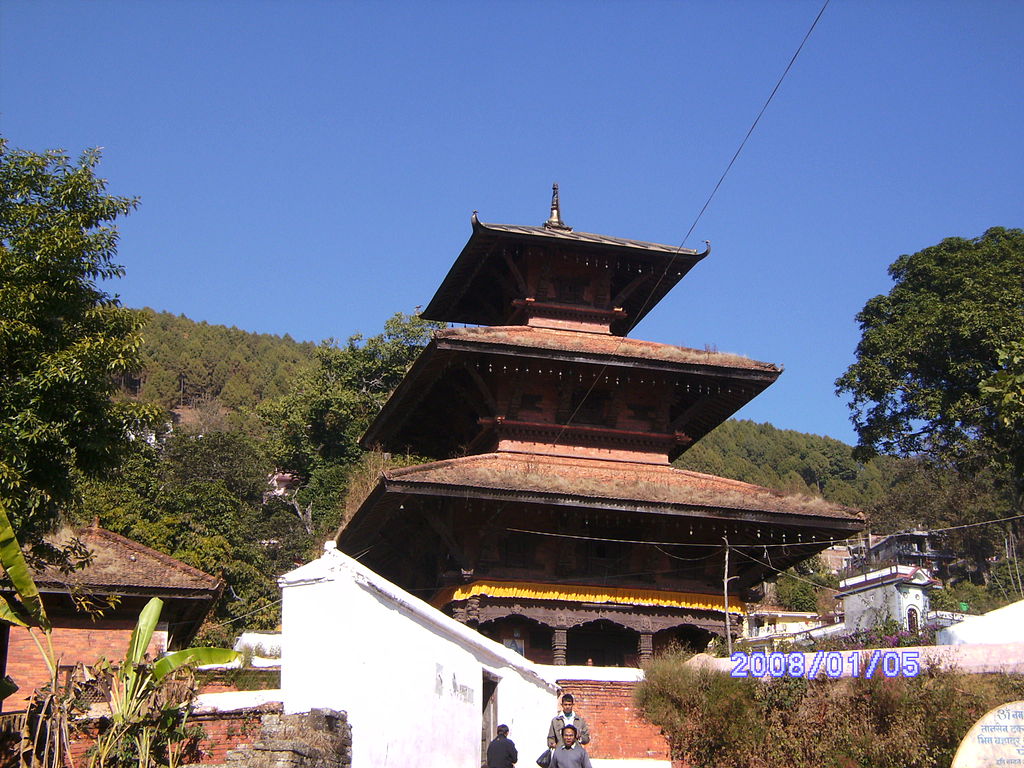 Bhairabsthan temple is popular not only in Palpa but also throughout the country. The temple is 5 km northeast of Tansen. Bhairabsthan temple can also be chosen as a short trekking destination. The temple has the largest ‘Trishul’ (Trident) which is a symbol of Lord Shiva. If you make your trip to the temple specifically on Saturday and Tuesday, then you can find a large number of devotees in the temple. According to the story of the locals, the figure of the Bhairav is similar to the Kal Bhairav of Kathmandu and is preserved beneath the floor of the temple. People from different places come to the temple to worship the god during the festival of Dashain. They offer the god with the flowers, and fruits and some also offer the blood of five different cattle- called ‘Panchabali.’

Approximately 20 km northwest of Tansen, there is a historical place; Ridi. There is a pagoda-style Rishikesh Mandir in Ridi that makes the place a pilgrimage site. Ridi is also the junction point of the Ridi River and the Kali Gandaki River. Every year, particularly during Maghe Sankranti (Magh 1st), people from different parts of the surrounding districts come to the temple. There is also a three days long fair at the time.
There exists a historical story behind the temple. Once while Mukunda Sen was taking a holy bath in Kali Gandaki River, he found the statue of the god Rishikesh in the water. The statue was most probably the size of the infant during that time. But, after Mukunda Sen established the statue in the temple, the statue gradually grew and finally took the shape of an adult. It is quite hard to believe but it is quite interesting to listen to the story from the locals when you are near the temple.

The Tundikhel is the large open area at the southeast of the town near the bus park. The Tundikhel is a famous gathering place. People gather in the Tundikhel and chat with each other on many topics. There is a statue of King Birendra on the southern-west corner of the Tundikhel. Another thing the Tundikhel is famous for is the large bronze typical water-jug called Karuwa placed for display. The Karuwa weighs 150 kg and is made of honey wax, Palpali bronze, cow’s dung, black stones, black mud, and doal mud.  Suresh Man, one of the locals from Tansen made the Karuwa and put it on display for the publicity of the Tansen all around the world. 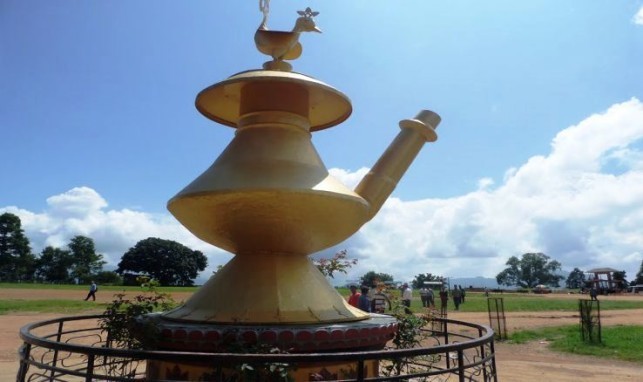 At an altitude of 1400 meters, there stands an attractive lake, Satyawati Lake. The lake is a pilgrimage site for the locals and believed that the name was taken from the name of the goddess called ‘Satyawati.’ The local people observe a one-night festival in the month of Kartik (Oct/Nov). According to the stories, the goddess is bad at hearing and the locals shout their wishes during the night to her. They believe that the one who circles the pond three times shouting their wishes will get their wishes fulfilled. People take baths and sacrifice animals in the pond. The pond occasionally is also the home to various migratory birds.

Along with religious significance, the pond is also a popular destination for tourists on the trek. The common trial starts from a place by the side of Siddhartha highway. The pond is only 2 hour trek from the main road. The mountains and the floral and faunal diversity are the attractions of the trek.

Sitalpati is in the center of the town. The Sitalpati was built in 1891/92 by Governor Khadka Shamsher and is octagonal in shape. During that time, Sitalpati used to be a place for public functions, and now it is a popular meeting point for the locals to have casual chats. The building provides a view as well as is a place to rest as it provides shade against the sun. 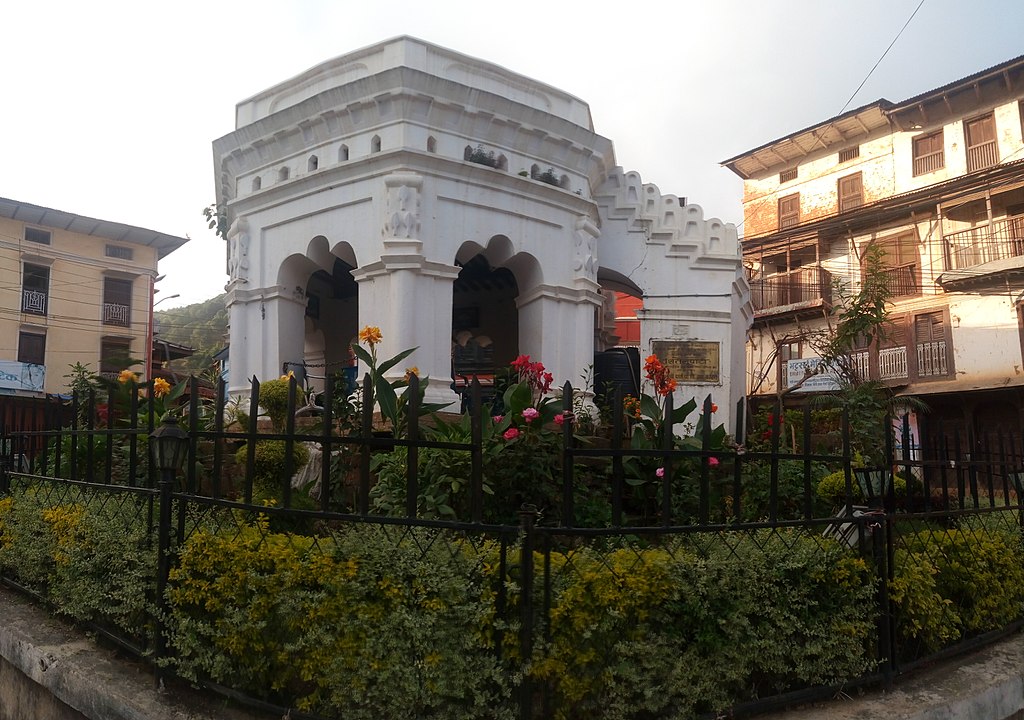 The Palpali Dhaka is a famous product of Tansen, Palpa, and has gained national as well as international fame. The Dhaka of Tansen is supplied all over the nation as well as international markets. There are various products made from Dhaka namely Dhaka topis, shawls, purses, and many more.  If you ever make your trip to Tansen, then don’t miss taking one of those Dhaka Topis. 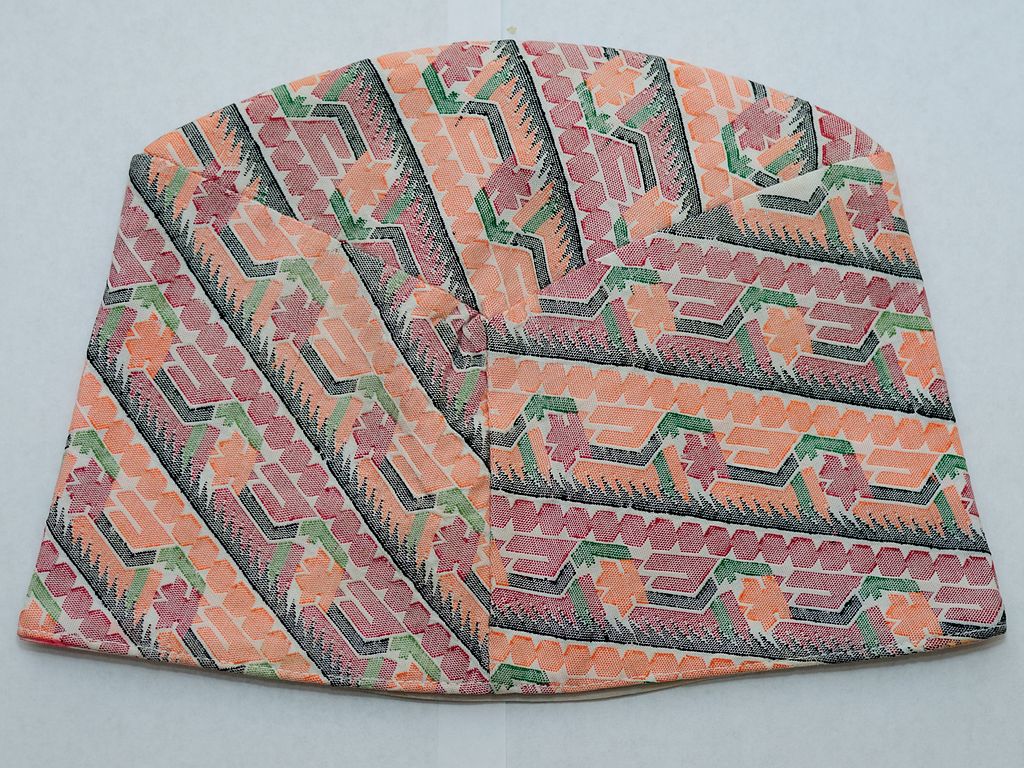 Metal crafts are the specialty of   Tansen. Taksar is the place where the old bronze and brass works are produced. The bronze ‘Karuwa’ (water jug), ‘hukka’ (water pipe), and ‘auntee’ (Newari jug to store raksi; homemade alcohol) are the productions one can witness in Tansen.

Tansen is the city that started the first coffee production in Nepal. The coffee of Tansen has a history of about 36 years and is one of the major productions of Tansen. More than 2000 farmers are involved in the activity and most importantly the farming is all organic; no chemical fertilizers, pesticides, or fungicides.

Know more about the First Organic Coffee Production in Nepal

A beautiful hill station with a pleasant climate

Situated at the top of the hill, the Tansen not only provides beautiful views of the mountains but also experiences sound weather. The hill has a perfect climate- neither the summer is too hot nor too the winter is too cold. The hill is a perfect station for the sunrise and sunset and is also very beautifully decorated with the rhododendron. The view of the Tansen Bazaar is also something not to be missed. 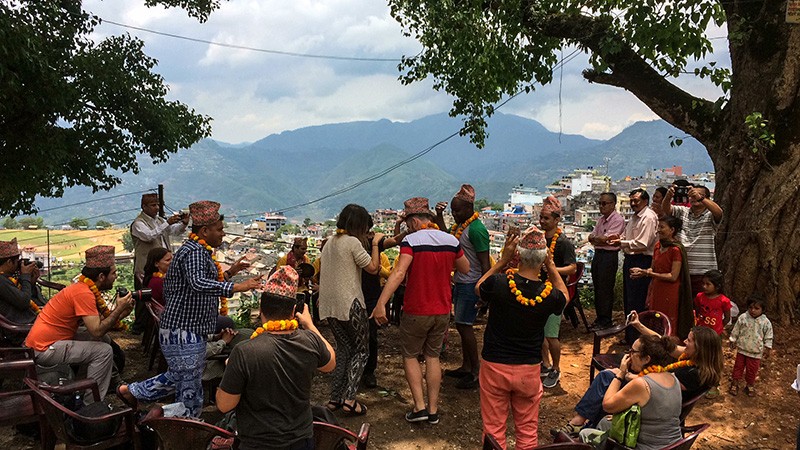 Your stay in Tansen is a good opportunity to taste the local cuisine of the place. The Hansko chyola (roasted or grilled spiced duck meat), Chukauni (boiled potato and curd), and Batuk (a lentil flour patty) are the famous foods in Tansen. You can also taste the Sel roti; a roti made of rice flour mixed with milk, water, sugar, cloves, and other ingredients and shaped circular and cooked gently until the color gets golden. 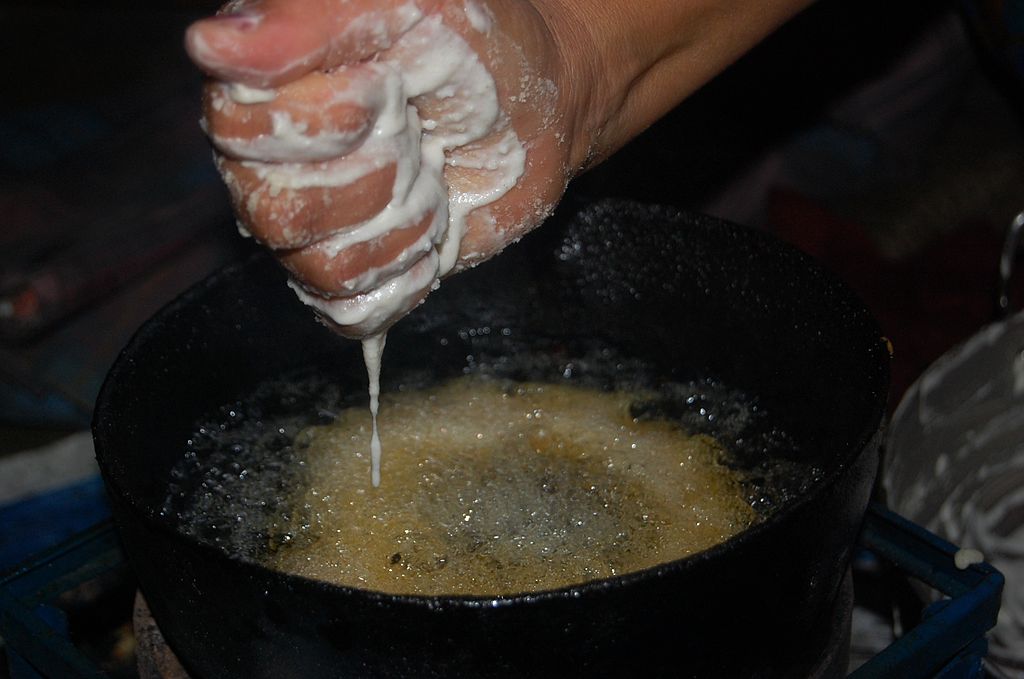 The Homestay and unique local hospitality

There are community homestays in Tansen where tourists can live with the local family and experience life wholly. The homestays provide the tourists with an amazing experience of the life of people in Tansen. Plus, the heartwarming hospitality of the host family, as well as the locals, is something that makes anyone feel special.