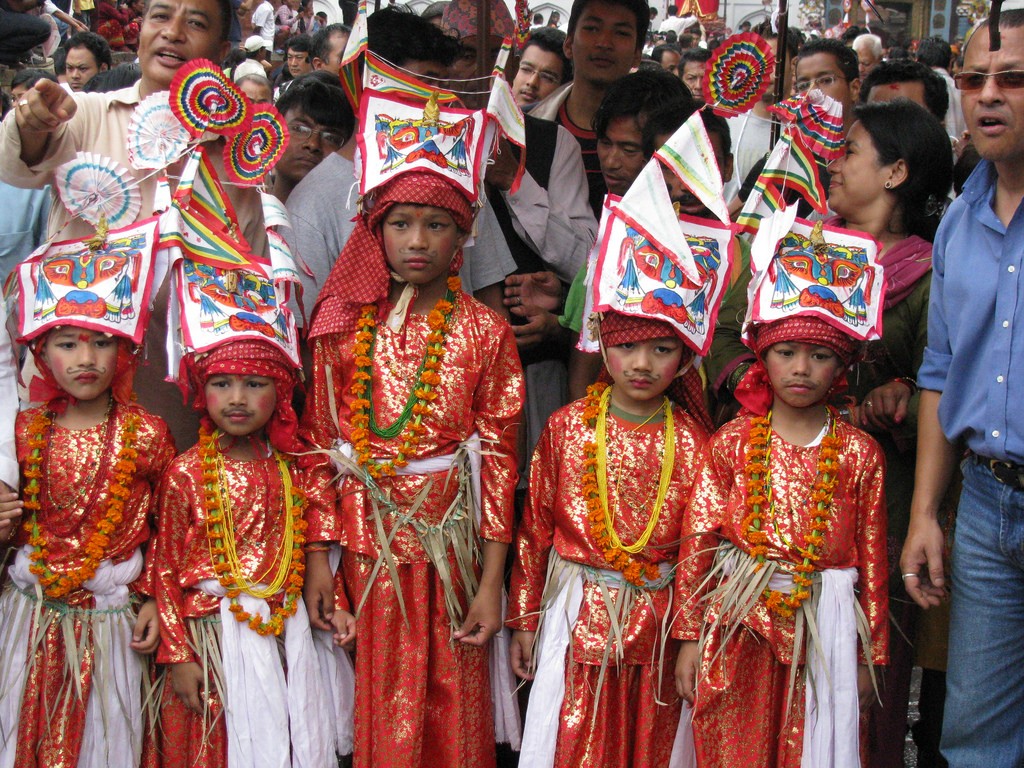 Gai Jatra (Gai means cow and Jatra means procession or journey) is one of the biggest festivals of Kathmandu valley celebrated to commemorate the demise of the loved ones during the year. It falls on the month of Bhadra (August to September), one day after Janai Purnima, the thread changing occasion. Gai Jatra is celebrated by a local Newar community residing in Kathmandu, Lalitpur and Bhaktapur districts with great enthusiasm and excitement. It is observed for a whole week, eight days to be exact. This year Gai Jatra falls on 11th Bhadra 2075 (27th August 2018). The Gai Jatra is also a public holiday in Nepal.

What happens in Gai Jatra?

As a part of the festival, the members of the deceased family send a cow for the procession. In the morning, the cows are bathed with the special cleaning of their tails. The people worship the cow, put vermilion powder (Tika) on it, and then the procession starts around the valley. For cows are not common in cities nowadays, young boys from the family dress as a cow. Various cultural programs are conducted and many nearby villages involve in the ceremonies.

Although Gai Jatra is celebrated for the whole eight days, the first and second days are the most important. The day of Gai Jatra includes the procession around the city in the memory of the demised member in the first half of the day followed by humor, jokes, songs, and dances in the second half. On the second day of Gai Jatra, people observe Mayata (a typical Buddhist festival) in which they visit all the 150 Vihars (all the monasteries) in sequential order. The devotee offers various things and lit the butter lamps throughout the journey.

The Gai Jatra fundamentally begun in ancient ages when people used to fear ‘Yamaraj,’ the god of death, and worshiped him. However, the modern tradition of celebrating Gai Jatra started with the death of a prince during the Malla Era. At that time King Pratap Malla ruled Kantipur (now Kathmandu).

King Pratap Malla wanted all his five sons to have experience in the administration of the country even during his lifetime. With this aim in view, he made them rule over the country for one year in turn. But, unfortunately, his second eldest son Chakrabartendra Malla died on the second day of his reign.

As the procession began and passed across the palace, the king explained to the queen the huge mass have also experienced the same grief she is going through. This procession made the queen realize she is not the only one who has lost her beloved. Though many others are mourning, and yet this hadn’t stopped them from participating in the parade, wear colorful clothes, make jokes, laugh, and celebrate life.

As the journey processed, the mass made silly jokes without any hesitation. When it came to social injustice and some reputed persons in the society, the queen could not help herself out, and she burst into laughter. The king, overwhelmed with happiness, commenced the tradition of Gai Jatra celebration annually and decided to include jokes and sarcasm as a part of the festival. 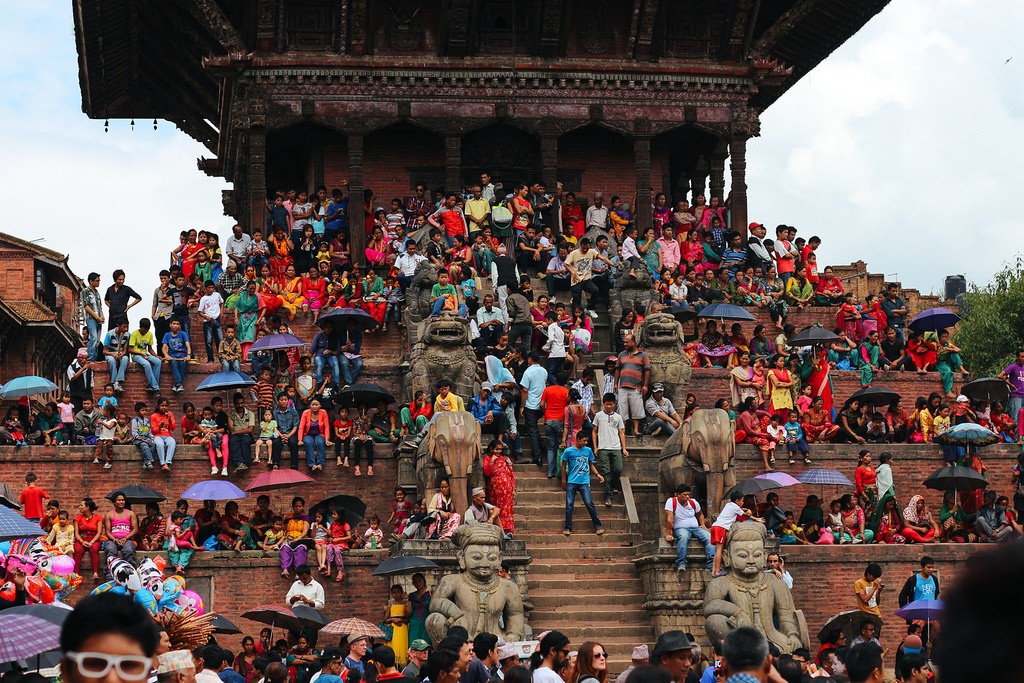 Beliefs regarding the Gai Jatra

Primarily, people celebrate Gai Jatra as a tribute to the departed soul. People believe that the cow, a holy animal according to Hindu myth, would lead the wandering spirits of the departed soul towards heaven. It is even believed that the dead one would hold the cow’s tail to make the journey across the Vaitarni River without facing any challenges. People believe that unless they perform Gai Jatra, the descended soul of their loved ones would never make their way to heaven.

Moreover, people offer foods, beaten rice, curd, and coins to the cows and the young boys who are dressed as cows. They believe that this will bring good fortune, peace, and harmony not only to them but also to their family and the city as well.

Lalitpur is believed to be the origin of this festival since the king who started this festival is from this city. However, the custom has been passed from generation to generation. People celebrate Gai Jatra in Kathmandu with more joy and programs than in Patan.

The celebration of Gai Jatra is almost similar in Patan to that of Kathmandu. Only what differs is the participant’s density. Since the people in Patan observe a Gai Jatra like festival called mayata, people’s involvement is observed to be higher in this festival rather than Gai Jatra.

Ready to explore Nepal and its strange cultural and traditional aspects?

Kirtipur has a wide celebration of Gai Jatra specifically in the historical towns Kipu dey, Panga, Naga, Bhajanga, and Yarwocha. They have a peculiar way of celebrating the festival. Apart from the good wishes of the demised soul, it indicates the hard work of the farmers in their fields. The men dress as women and visit door to door requesting to join them in the celebration. Music and dances are performed in a variety of manner.  Kirtipur carries many beliefs and stories behind the celebration of Gai Jatra than other cities.

The most enjoyable and exciting Gai Jatra is observed in Bhaktapur with full of energy and enthusiasm. A two-wheeled chariot called Taha-Machas made of the bamboo framework that indicated the dead ones with their possessions and photographs. The men are dressed up in women’s dress which we call Hakupatasi. Face painting and masks are common. Similarly, what is more, unique about Gai Jatra in Bhaktapur is the Ghinta Ghisi dance which is celebrated for a week. The dance is performed in a long row of people, the two opposite people hitting each other’s stick. 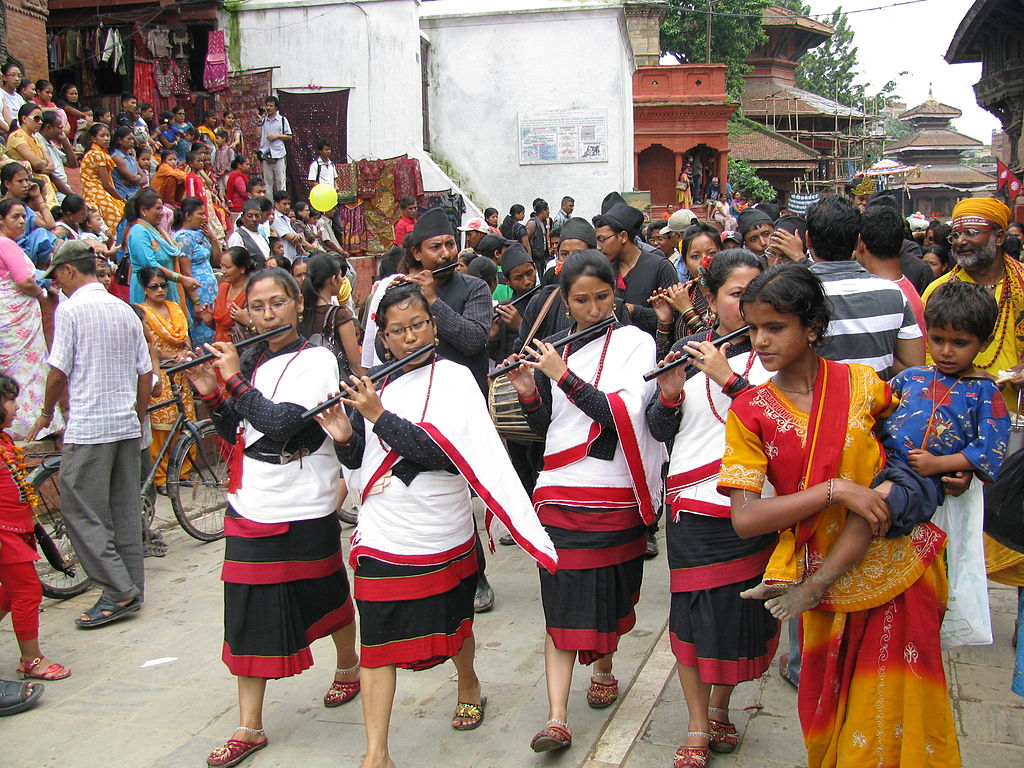 Celebrates death as a part of life

Gai Jatra provides a community with an opportunity to create a stronger bond through participation in songs, laughter, dances, culture, and remembrance of their beloved one. Moreover, this is a perfect demonstration of the fact that death is a natural phenomenon and a part of life. This, it reflects the celebration of sorrows in a way that adds colors to our life.

Adding on, the politicians or any government officials are also trickled by the festival against the corruption and inefficiency in the existing systems through the jokes, satires, and comics. On this day, people are allowed to convey whatever they want as long as it is humorously. This practice was so effective in the ancient period that the governmental bodies used to make different laws according to the message conveyed through the event.

Through the passage of time, there are changes in the way of celebration of Gai Jatra. Along with the cultural tradition of celebrating the festival, various activities are added as a part of the festival. Even the newspapers, magazines, and television channels launch various videos, photographs, and cartoons based upon the existing sociopolitical issues in the community as well as the country. Even the theater performs satirical and humorous dramas during the occasion. We can even find many Gai Jatra videos uploaded in YouTube these days.

Thus, Gai Jatra is a festival that allows people to accept the universal truth of life that is death. According to Hinduism, “Whatever a man does in his life is a preparation to lead a good life after death”. This festival empowers the people to prepare themselves for their life after death. If you are planning to visit Nepal between August and September then do not miss the opportunity to experience the grand Gai Jatra. You will be more than overwhelmed to observe such energy, humor, and colors in a single event.

Want to visit Nepal during Gai Jatra. Book today to know more about the festival.