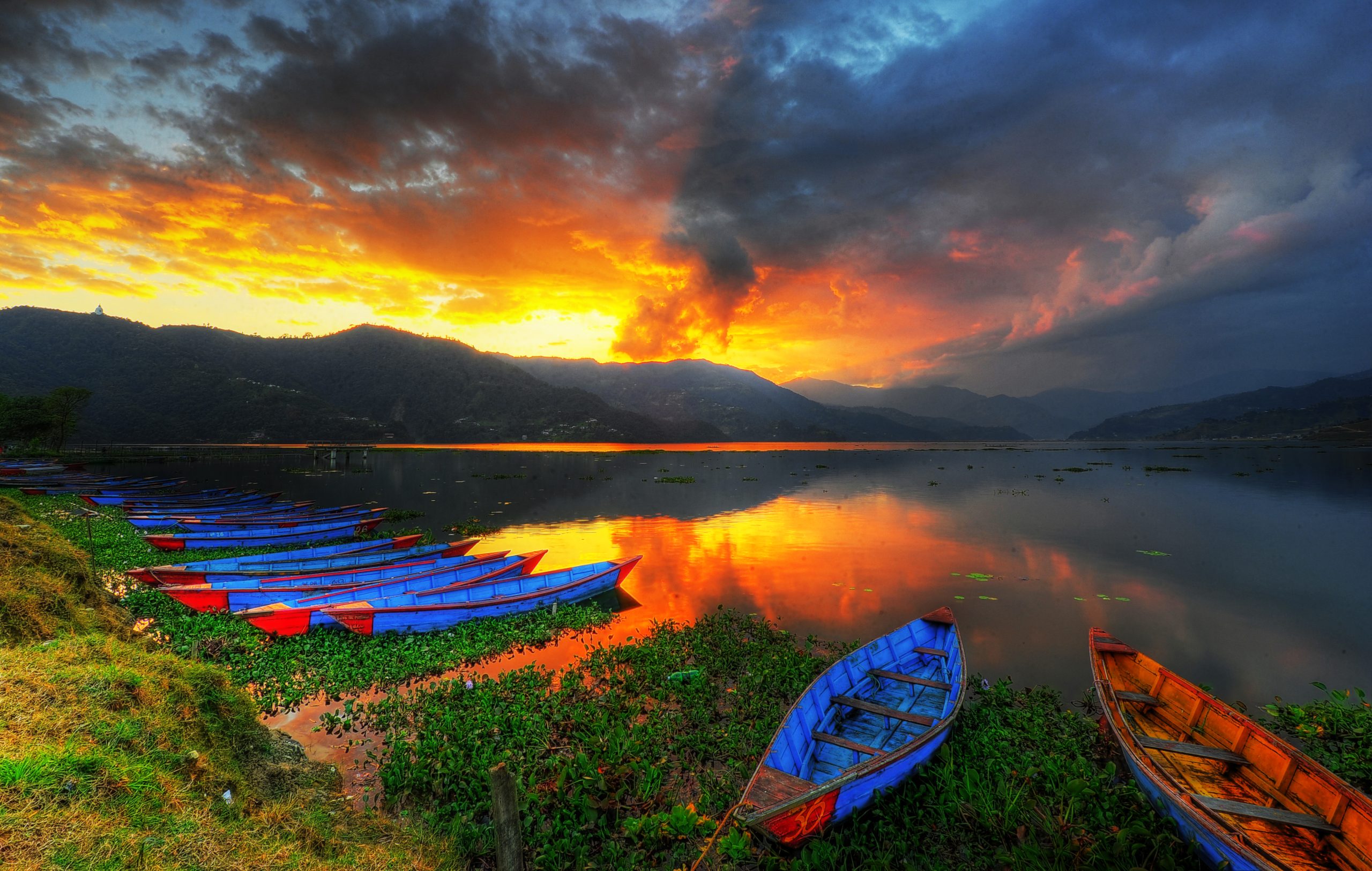 Pokhara: The City of Lakes

Pokhara is the second largest city and number one adventure and Leisure City in Nepal. Nepal is a beautiful country blessed with the varied topography, natural resources, mesmerizing mountains and culture, and traditions. Among various places, Nepal provides a sense of pleasure, fun, and adventure at the same time; Pokhara is one of the places that strikes everyone’s mind. Together with the adventure activities, Pokhara provides the visitors with a variety of the foods to taste.

Whether you are returning from weeks long trekking or traveled a long, tiring bus journey, Pokhara is the best place for revitalize your mind and body. With all the natural beauties like lakes, mountains and various adventure activities, Pokhara receives tourists every year from all around the world that it is also called the Capital of tourism in Nepal. 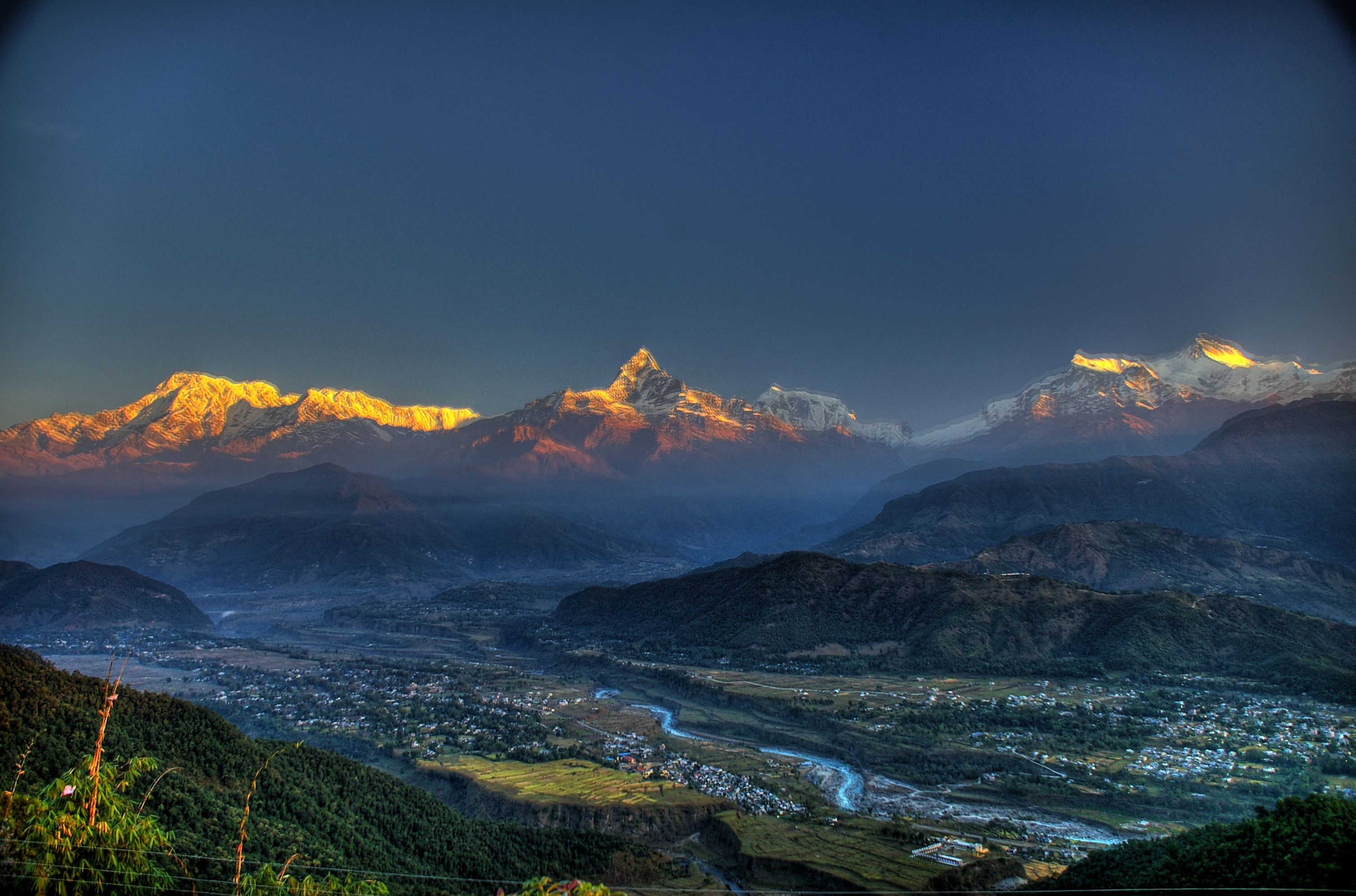 Pokhara is a metropolitan city in Kaski district Nepal, around 200 kilometers west of Kathmandu. The altitude of Pokhara varies from 827 meters in the south to 1,740 meters in the north. The Annapurna Range which consists of three of the highest mountains in the world; Mt Dhaulagiri, Mt Annapurna -I and Mt Manaslu, lies in the Pokhara Valley and thus being a base for the Annapurna Circuit.

Looking back to the history of Pokhara, it was one of the parts of the kingdom Kaski (one of the 24 kingdoms of Nepal). King of Kaski established Pokhara as a commercial center in mid 18th century. The Brahmin, Chhetries, Thakuri, and Dalits settled in the most of Pokhara during the ancient time. However, the majority of Pokhara at present is inhabited by Khas (Brahmin, Chhetries, and Thakuri), Gurungs and Magar.

In recent days, Pokhara is a world famous tourist destination. Old Newari houses and many medieval era temples stand reflecting the architecture of the ancient time. On the other hand, the heart-melting natural beauty of the place and the thrilling adventures Pokhara provides is a perfect combination to relax you.

Where to visit in Pokhara?

The Phewa Lake is the center of attraction in Pokhara. The lake lies at the altitude of 742 meters and occupies 4.43 km2 of area. The average depth of the lake is about 8.6 meters. The lake is famous for boating on the bank of the lake which provides the visitors with the tour of the lake. One can hire a boat and visit around the floating on the surface of the beautiful lake. 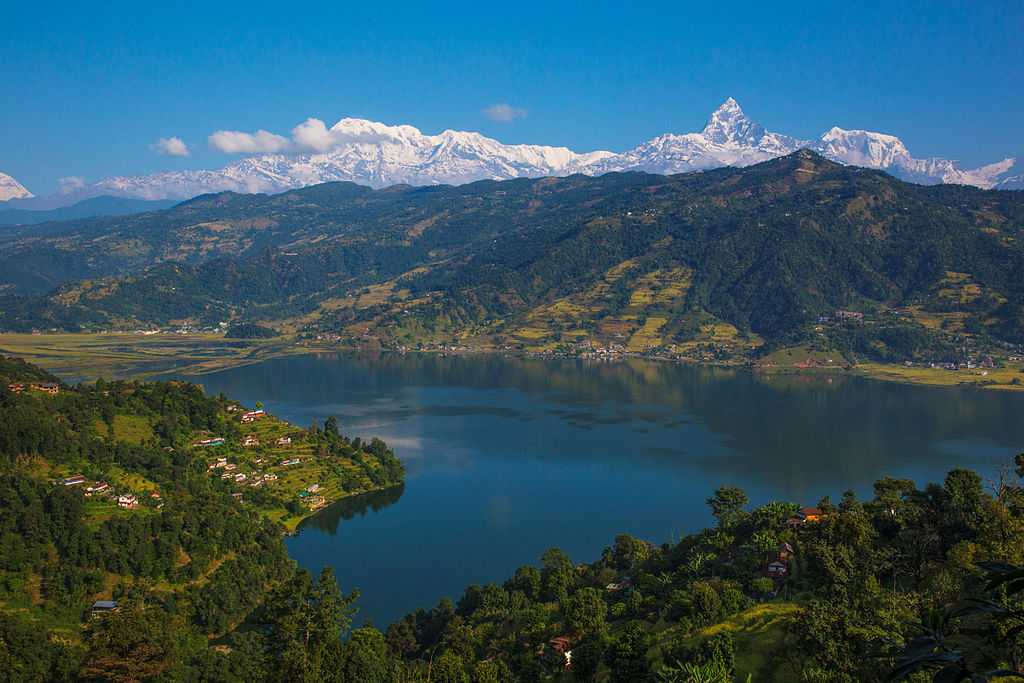 The lake is also famous for the reflection of the Mt. Machhapuchhare and other mountains of the Annapurna and Dhaulagiri ranges. The breathtaking view of the mountains from the lake and their beautiful reflection in the water of the lake make the lake as if it is a piece of heaven landed on earth. 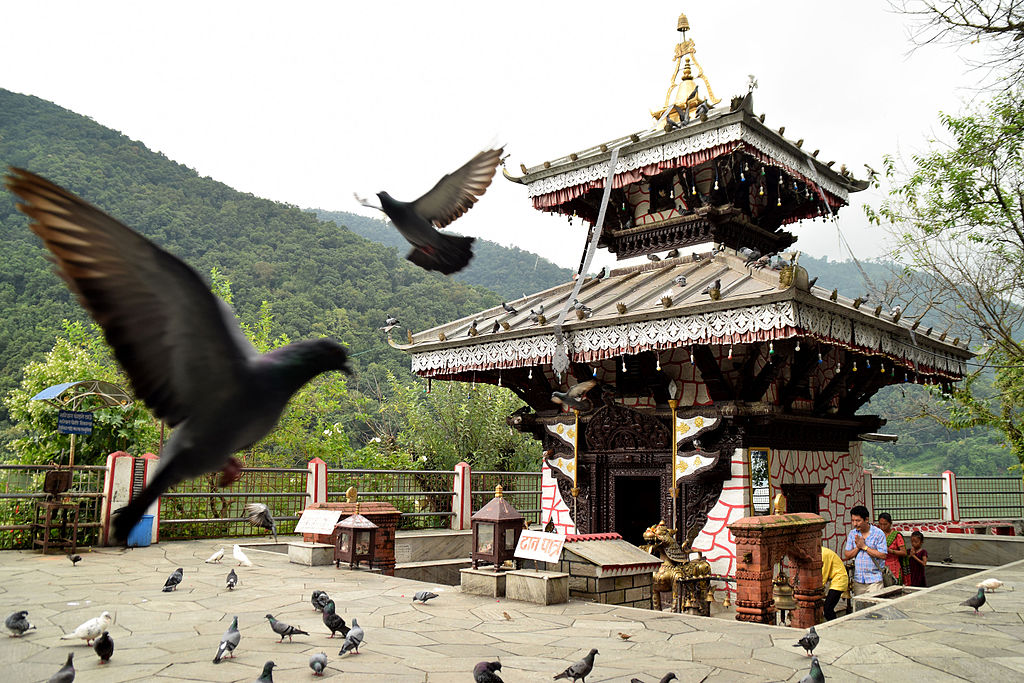 Begnas Lake lies in the south-east of Pokhara valley and is the third largest lake of Nepal. The water in the lake is not constant and is used for irrigation. Begnas Lake is a quiet place with the beautiful mountains and a perfect place to be in the evening. One can also hire a canoe boat and paddle themselves on the lake. Begnas Lake is a perfect place to relax in the lap of Annapurna Range, and with the view of the beautiful sunset. 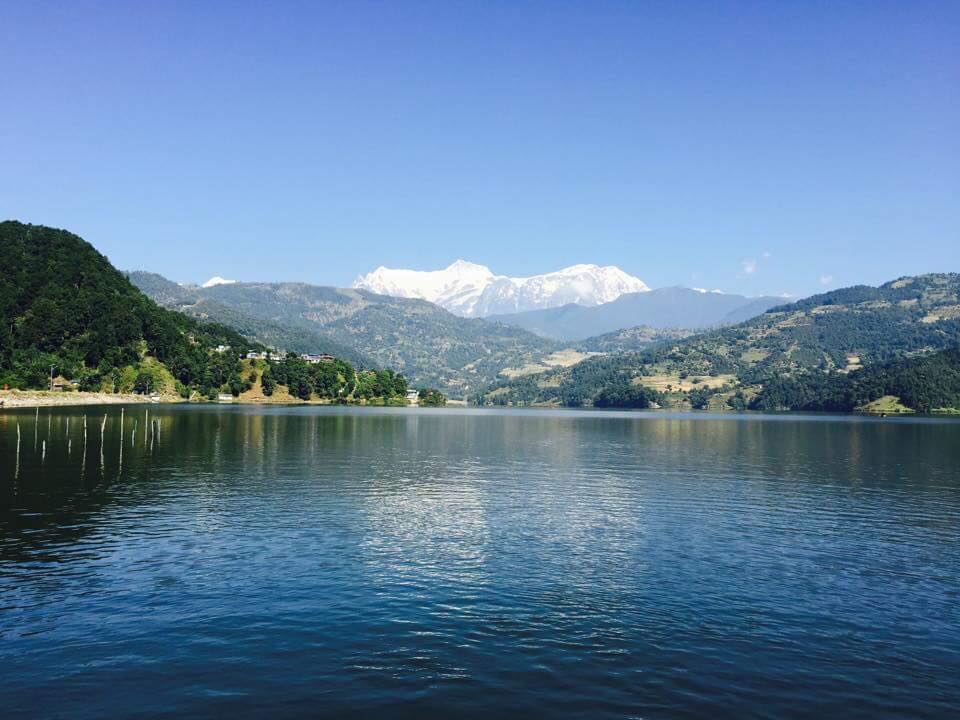 Rupa Lake lies at an altitude of 600 meters and covers an area of 1.35 km2. Cage culture and pen culture can be seen in Rupa Lake to promote fishing. Also, this lake is rich in floral and faunal diversity. Among the 193 species of wetland-dependent birds found in Nepal, 36 species of them are recorded in the Rupa Lake which alone contributes up to 19% of the total species.

The Davis fall is 2 km southeast from the center of the Pokhara city. The fall is also called Patale Chhango (Hells Fall) in Nepali. The water from the falls runs through an underground tunnel of about 150 m long and 30 m below the ground. It is said that in 1961, a woman slipped and got drowned by the water while swimming with her husband and was killed. The name of the fall hence was kept in her remembrance. The water in the Davis falls comes with much force during the monsoon season. However, always keep in mind to be careful about accidents. 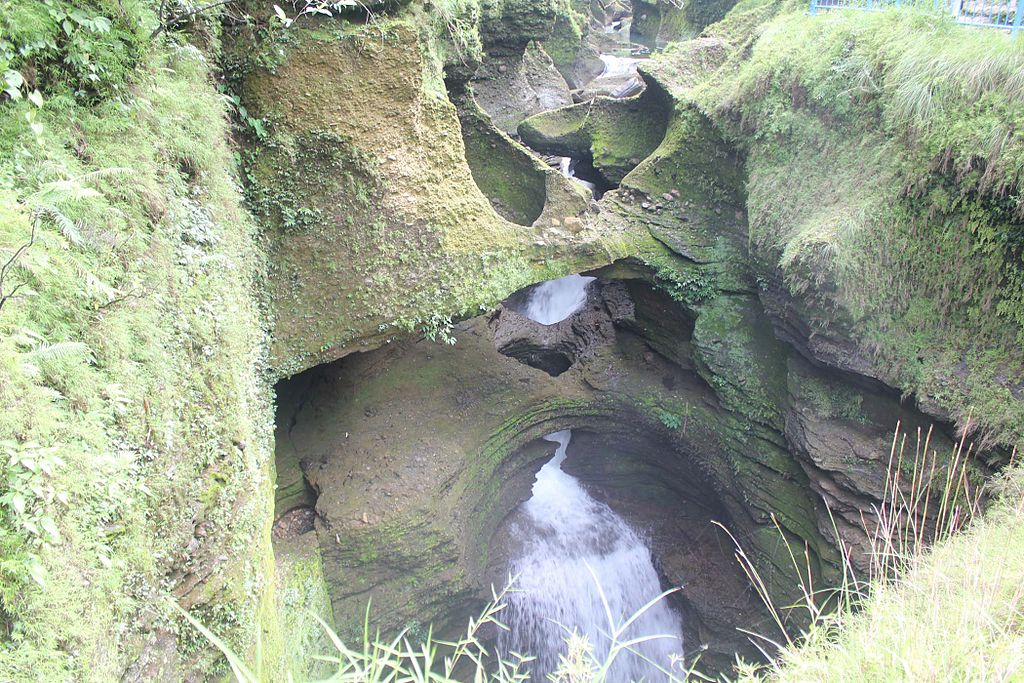 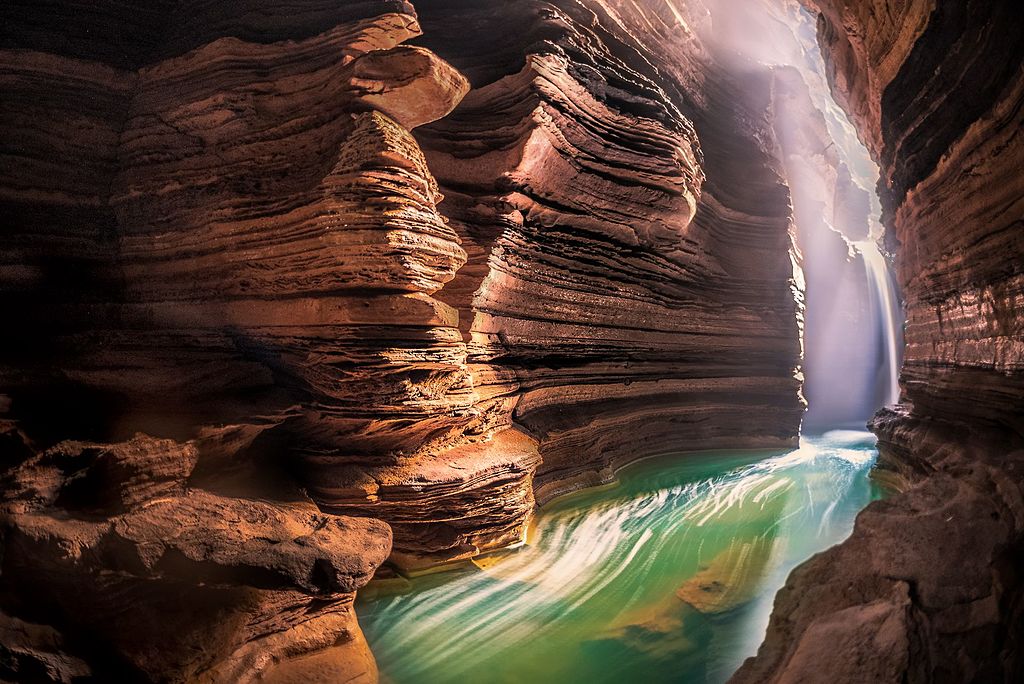 Mahendra Cave is an ancient cave below a mountain in the northeast of Pokhara. The cave is formed by young limestone and is of religious importance. Inside of the cave is complete darkness with water dripping from the top. The first 100 meters corridor is properly accessible while it narrows as moving further.

The Bindabasini temple is the Guardian Deity of Pokhara. The temple stands at the top of a hill at an altitude of 3000 feet and is dedicated to goddess Durga. Founded in 1845 BS, the temple receives a large number of devotees during the Dashain festival. The temple is colored in white, and a dome-like structure dominates the courtyard and surrounded by a park-like landscape. The scarifying of the animals is doneon the Saturdays and the Tuesdays. Beautiful mountains ranges and the view of the old Bazaar are also the attractions of the temple. 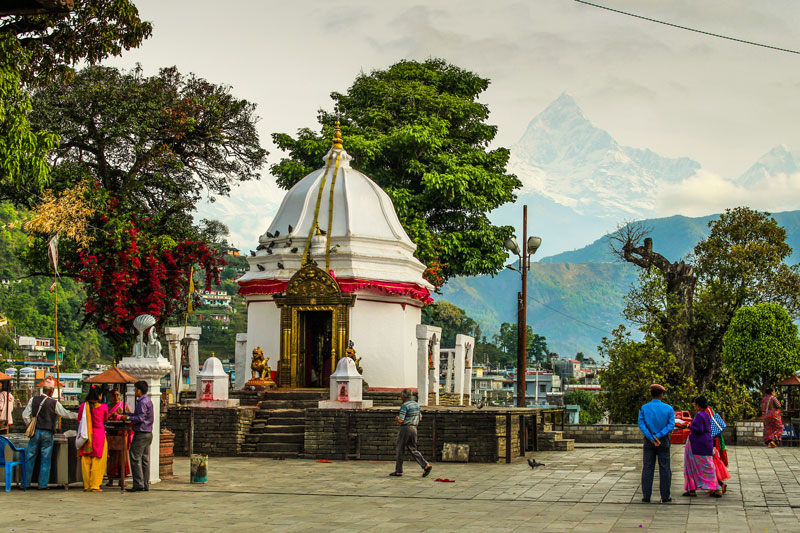 Sarangkot is a viewpoint at an altitude of 1600 meters and is famous for the mountain views, sunrise, and sunset. From here, one can view the panorama of the glorious mountains that includes Dhaulagiri (8167 m) in the west, Pyramid of Machhapuchhare (6997 m), and Annapurna II (7937 m) in the east. A short trek to the hilltop in the early morning or the evening will be a perfect time to get lost in nature with the sunrise or the sunset.

Located at the southeast of Pokhara at the altitude of almost 1,000 meters, the Peace Stupa is a holy place for the Buddhist. The white colored monument is 115 feet tall and 344 feet in diameter. The stupa is a good choice for a short hike, sunrise view, and sight seeing. The stupa provides a clear view of the Himalayan Range, Phewa Lake, and the Pokhara city.

It can be accessed by hiring a mountain bike and paddle up the rocky path. One can also hire a boat across the lake and walking along the uphill trail through the beautiful forest.

Experience the adventure of Biking, Hiking, Rafting and Wildlife Activities

Activities to do in Pokhara

If you are looking for something real adventure and fun part from the natural scenario and pleasing mountains in Pokhara, then you have got many options. Pokhara is all ready to provide you with the wonderful life experiences of various adventure activities:

Paragliding in Pokhara is an amazing experience. The take-off spot is Sarangkot. The flight swings over the Sarangkot for a while and then heads over Pokhara sharing the sky with the birds. Most people go for a tandem flight (with a pilot). Flying on the sky, below lies the beautiful valley, the green hills and the pleasing Phewa Lake, the experience is amazing. The closer view of the Machhapuchhare (Fish Tail) and the Annapurna Range will make all the fear during the flight escape in a second. 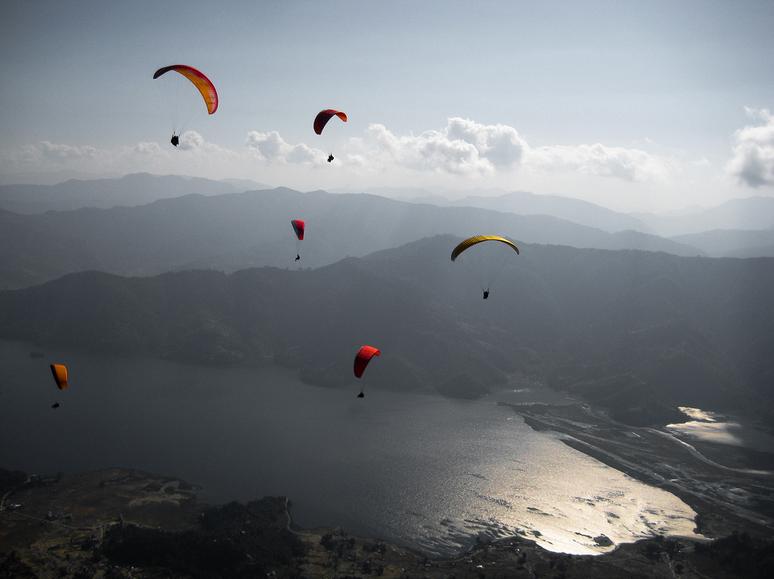 Zip flying is an activity that has been attracting tourists in Nepal. The Zip Flying starts from 1625 m in Sarangkot and ends at 960 m in Hemmja. It consists of a trolley what is mounted ona steel cable, 1.8 km long. You will descend 2000 vertical feet at an angle of 56% and speed over 90 miles per hour. The flight will amaze you with the Annapurna range, Machhapuchhare, Dhaulagiri range, Lamjung Himal range and beautiful Pokhara valley. Wait no more and make our dream to fly come true.

Hand Gliding is an amazing experience to ride a plane by own. Hand Gliding is also done from Sarangkot and you are the pilot of your own plane. You can enjoy the ride freely like a bird and look at the beautiful mountains, lakes and monasteries. Weather is an important element for Hand Gliding.

Sky diving ads thrill to the beauty of Pokhara. Now fly above the clouds and witness the enchanting city. The skydive in Pokhara are traditional jumps and made from the altitude of 11,000 t0 13,000 meters at Pame Danda Drop zone, west of Phewa Lake.

Paramotor is a power unit a pilot wears in his back. It is almost similar to Paragliding but a little risky and requires minimal training.

Bungee Jumping in Pokhara is the highest water touch jump in the world. This thrilling experience is something you would like to do once in a lifetime. The jump is made from the top of the tower which is 80 m high and dive in a pond which is 18-20 meters deep.

Trekking is always the best option for adventure and exploration. Pokhara is a gateway for the trek to Annapurna Base Camp, Ghorepani Poon Hill trek, Mardi Himal trek, Jomsom Muktinath trek, and Upper Mustang trek. Also, you can go for a short one day trek around Pokhara like a trek to Dhampus village, Sarangkot- Naudanda hike, Peace Stupa Hike, a day hike to Australian Camp and others.

A mountain bike ride will be a wonderful experience in Pokhara. Mountain biking is a chance to explore Pokhara little more riding through trials rarely followed by the tourists. You can bike up to the Peace stupa or roam around the Phewa Lake in the evening along the lakeside.

The warm and beautiful Seti River provides the adventure of rafting. The Damauli is the entry point and ends at Gaighat. It is also a destination for bird watchers. The Seti River is a gentle river and thus provides the experience of rafting without major challenges. However the flow may be wild during the monsoon. 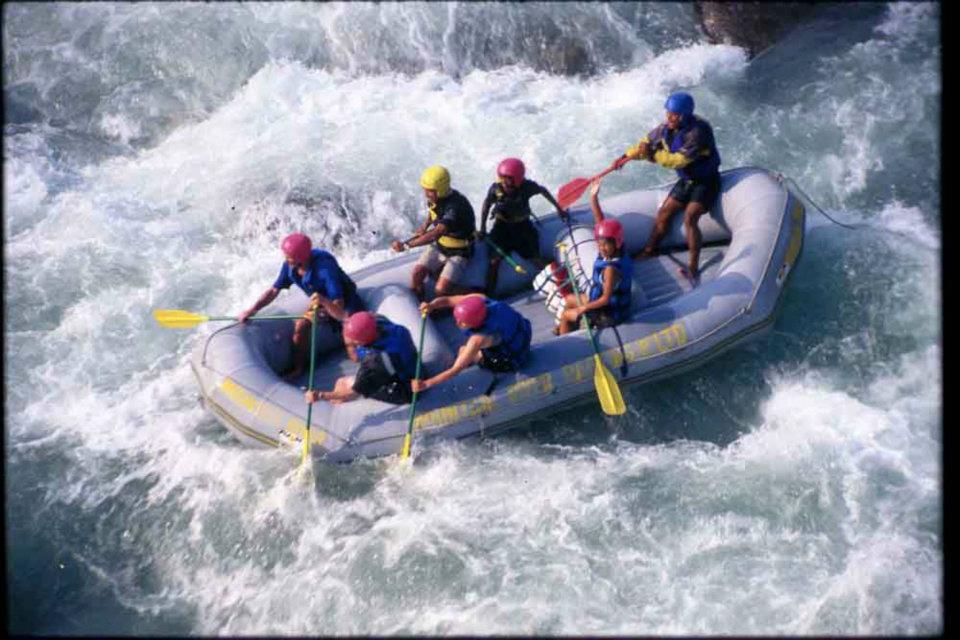 Stand up Paddling is another activity to challenge you in Pokhara. Paddling is done either in Phewa or in Begnas Lake. The choice of lake is yours. Although, you might find it difficult initially to balance the paddle, but as soon as you balance the paddle the activity is amazing that drives you lost in the nature of the lake.

Such an interesting name, isn’t it? Para-Hawking is a new, extraordinary sport and may be of special concern for someone who is interested in birds of prey. Before the activity, the pilot or the passenger takes a fragment of meat in their hand. During the flight, the bird will approach you and may also quietly land on the hand with meat. It takes the meat and then fly way to find the next flyer with another piece of meat. This real experience is something you cannot afford to miss. 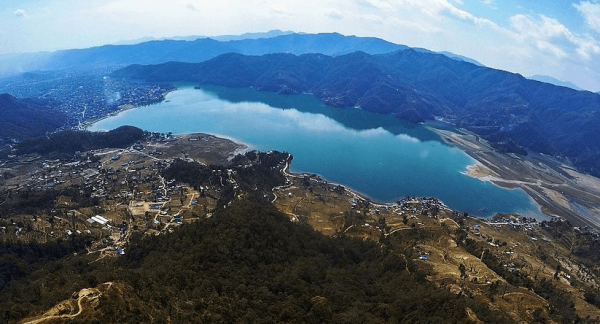