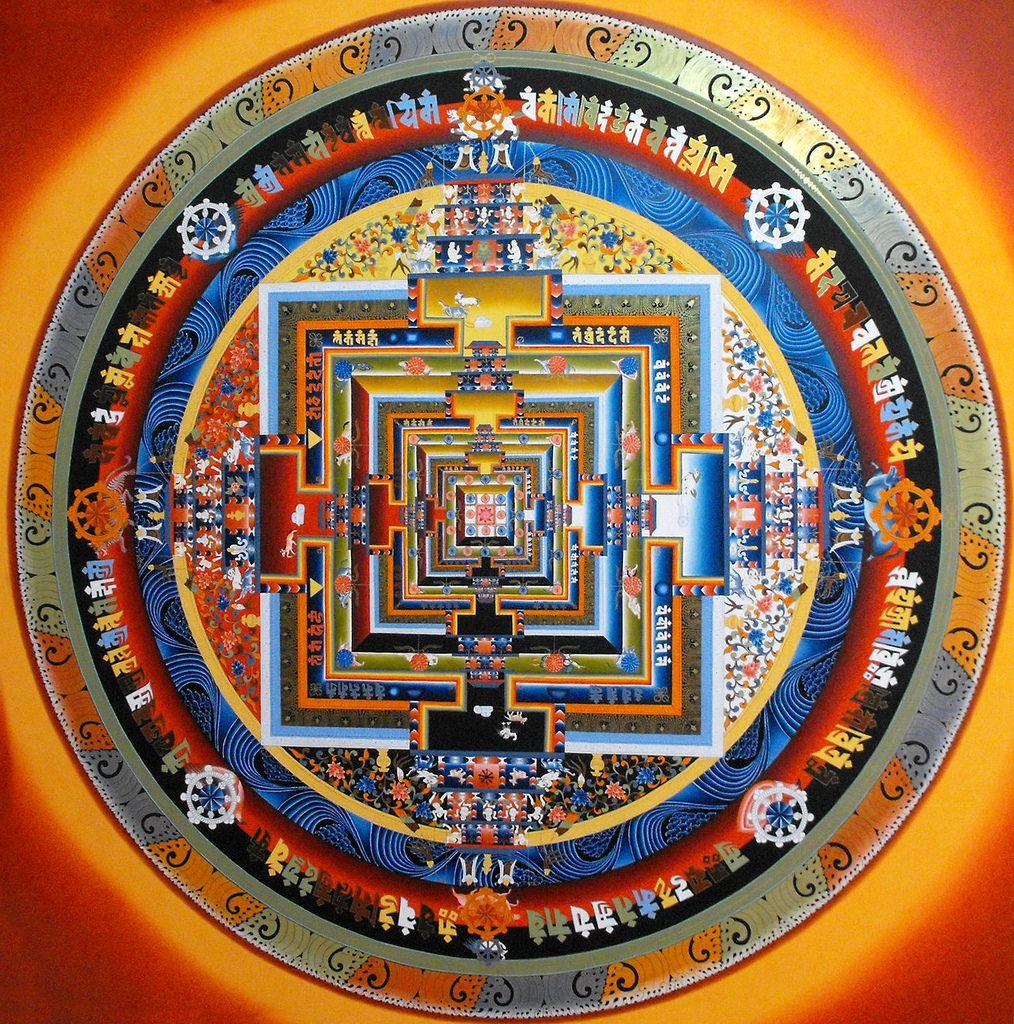 Thangka: a Marvelous piece of Art

Thangka: also spelled as tangka, thanka or tanka is a Tibetan Buddhist painting made on cotton, silk applique that usually demonstrates a Buddhist deity, scene or Mandala. The Thangkas are based on certain themes such as history, policy, culture, social life and so on. Traditionally the Thangka remains unframed and kept rolled up when they are not on display. The size of the Thangka varies which ranges from small to extremely large, several meters in each dimension.

The Thangkas serve in many different ways. They are important teaching tools which portray the life of Gautam Buddha with many other small figures and deities. The Wheel of Life (Bhavachakra) is one subject that the Thangka represents. The Wheel of life visually represents the teachings of Art of Enlightenment. These days the Buddhist use Thangkas for meditation, during any ritual or ceremony,and for decorative purpose.

The Tibetan Buddhist painting is a widespread tradition of early Buddhist paintings. However, they now exist only in certain places like Ajanta Caves in India and Mogao Caves on the Silk Road. The places have large wall-paintings and are the deep storage of the Tibetan paintings on cloth. The Thangkas took their form alongside the wall paintings in the monasteries in Tibet.

In Nepal, the history of the Thangkas dates back to the 14th century. Historically, the Nepalese styles made a significant influence in Tibet art. There was evidence of the Tibetan and Chinese influences in Nepalese paintings like Paubhas (Thangkas). These Paubhas are of two types, the Palas which illustrate the paintings of the deities and the Mandala which are mystic diagrams of the complex test in circles and squares with distinctive importance. During the 7th century, the demand for religious icons and Buddhist manuscripts in Tibet increased. Numbers of manuscripts were copied in Kathmandu to supply to Tibet. For example, Astasahasrika Prajnaparamita in Patan in 1999 AD. The Nepalese art then flourished to China in the thirteenth century by Araniko. 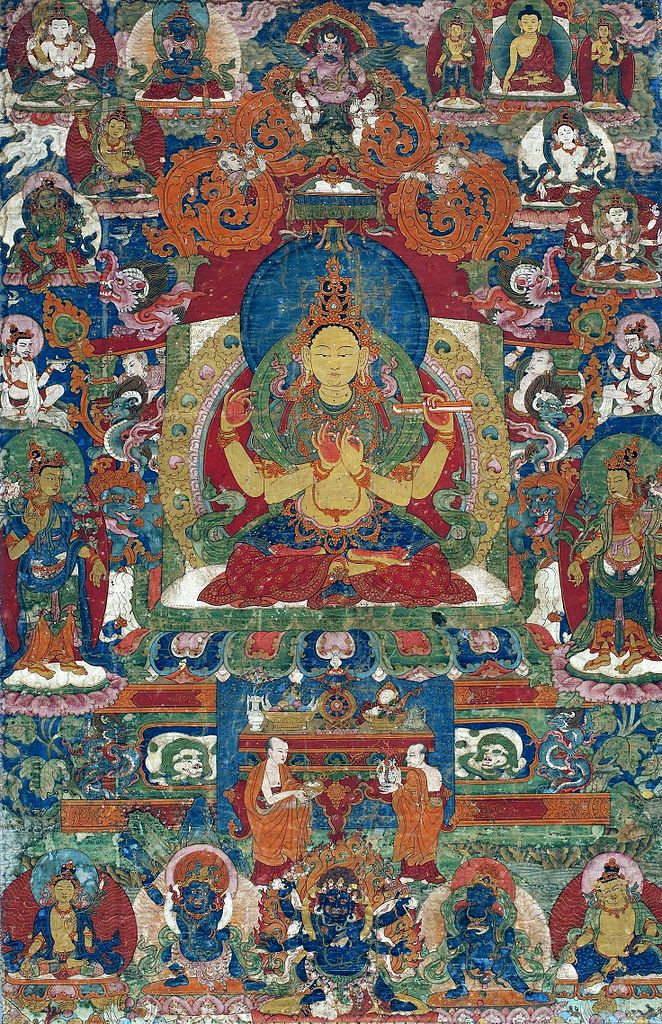 In the eighteenth century, after the introduction of paper, the paintings became brighter due to the use of colors. The Thangkas demonstrated the forms of Shiva and Shakti in conventional poses. The other deities like Mahakala, Manjushri, and Lokeshwara also became popular and became the part of the Thangka in later days. The paintings during that time used the symbols mainly emphasizing on the female element and sexuality.

The religious paintings are called Paubhas in Newari and Thangka in Tibetan. The share of their origin may go to the Nepalese artists along with monks and traders. Thangkas in Nepal previously were simple in design where the smaller deities surround the centrally located large figure. The research and studies during the reign of Tibetan Dharma King Trisong Duetsen confessed that the lining, measurements, customs, implementations, and ornaments in Thangkas were of Indian style. The paintings in Nepal involved the unique combination Nepalese style figures with the Chinese background making them distinctive.

The Thangka became popular in the Northern Himalayan regions among the Lamas along with the Gurungs and Tamang. Initially, the Thangkas were painted as a way to gain merit. But, nowadays it has taken a commercial fame. The Thangka painting provides a sustained employment to the people in the hills of Nepal. The Newari Thangkas or Paubhas have become a part of Kathmandu valley since the 13th century. However, the Tibetans do not allow selling the Thangkas on a large scale.

Anything You Want to Know about the Thangkas

The Thangkas are of different types according to the materials and the technique used during the painting. Generally, Thangkas are broadly classified in two groups: those which are painted and those made of either silk, by embroidery or applique.

Here are some further classifications of the Thangkas types:

Painted in colors: Tson-tang – the most common type

Applique: Go-tang: the one which uses needle work

Red Background: Mar-tang: Gold line, but referring to the gold line on Vermilion

The thangka painting process is not an easy job to accomplish. One has to be an expert in measurements and Buddhist deities. The basic of the Thangka lies on one vertical and two diagonal lines, the intersection of which determines the center.

The choice and preparation of Canvas

Normally, light-colored, neither too thick nor too hard are considered for the painting. The artists mostly prefer pure white poplin or cotton cloth. Firstly, they fix the canvas on a wooden frame by sewing it on the four sides and making it tight. The artists also apply a thin layer of glue to the canvas so that it will provide a base color. After the glue dries, they apply a lime paste and then rub the canvas  with a piece of glass, shell or boulder. The rubbing continues as long as the cloth on the canvas last no more.

The Thangka artist prepares the initial layout of the painting according to the number and size of the deities. Then they draw the major positioning lines, sidelines, center vertical line, two diagonals and other contours to mark.

The Sketch and color 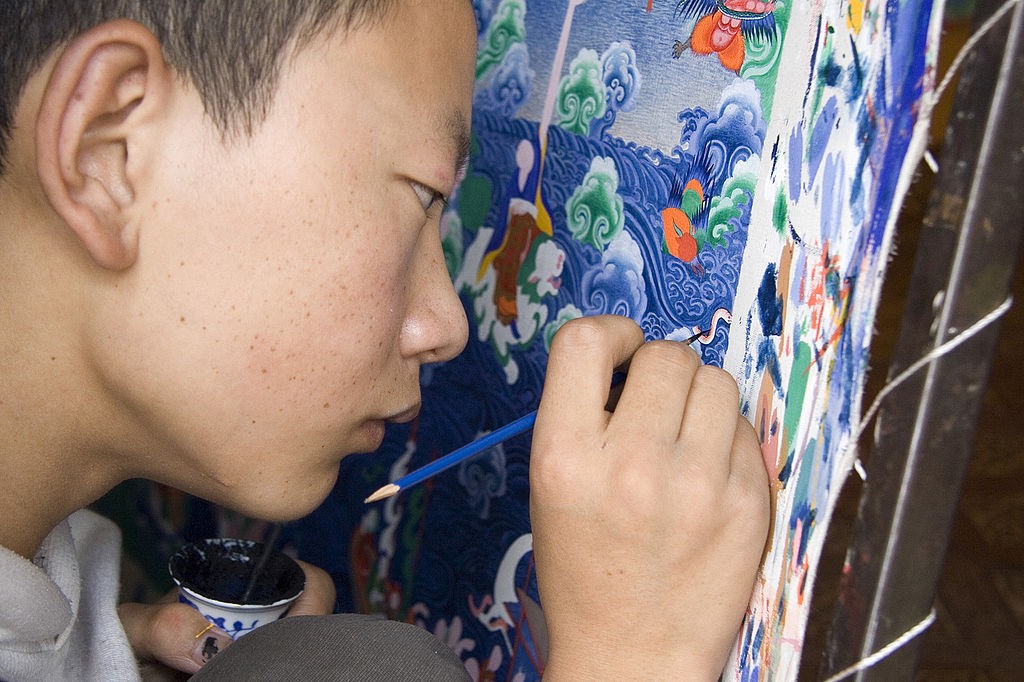 After adding the color, it’s time for gold paint. The patterns on the clothes are drawn by using the gold color. Some decorations also include colorful linings.

This is the step when Buddha enters into the image. The painting of the eyes of the Buddha is the most sacred stage of the Thangka painting. The painters paint the eye on an auspicious day. The painting of lips, nose, hands, feet,and nails is the final step of the painting. Lastly they worship the  Thangka. This step includes “Opening of the Eyes” of Buddha.

Major elements used in Thangkas to represent the Buddha

While preparing the Thangkas, there are at least four signs that represent the Buddha in them. Firstly, to represent the birth and his immediate seven steps, the artists include a Saal tree and seven lotuses in four directions. The tree is the symbol under which the queen Mayadevi took rest while giving birth to Buddha. The lotuses represent the seven steps of Buddha.

Secondly, the artists beautifully place the Buddha on a throne with the Bodhi tree emanating rays if lights of all colors. Likewise, the turning of the wheel of dharma is reflected by the Bodhi tree giving teachings. And lastly, the Buddha lies resting on a long bed-like throne between two Sal trees which represents the passing of the Buddha.

Buying a Tibetan Thangka in Nepal

Buying Thangkas in Nepal offers tourists a wide range of options. Various shops and Thangkas schools in Kathmandu sell Thangkas. But still, one must be clever enough to buy the right Thangkas at the right price.

The main issue while buying the Thangka comes to the price. The price ranges from thousands to several lakhs (hundred thousand). The quality, size and of course your ability to negotiate are the determinants of the price. It is, therefore, best to first set apart the amount of money you will be spending on the Thangka. Deciding a subject of the Thangka prior to buying might help you a lot to compare them between the shops.

Willing to Take the Marvelous Art Home with You?

Most importantly take some spare hours from your schedule to roam around the shops and have a look of Thangkas. It would be even easier if you know the size of the Thangka you will be willing to buy. Most of the paintings come without a frame and thus you can frame the Thangka with traditional silk frames. The Thangkas are available in various sizes and you can always customize the frame.