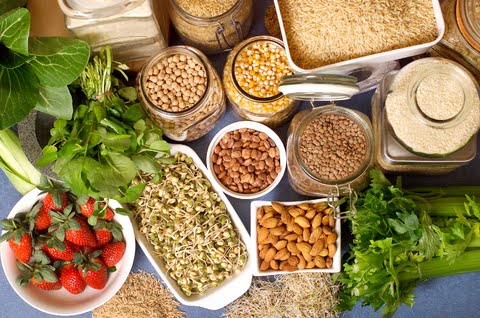 Nepal is a small country with multiple caste, culture, tradition, and languages. If we take a closer look to Nepalese diversity, there comes a large diversity in food. The foods in Nepal are the part of the culture and varieties of foods are prepared on different occasions. The foods represent the various indigenous people living in the different parts of the country. The mountain region of the country is influenced by the Tibet and this has foods of Tibet influence. The Terai also has a wide variety of the foods because of the agriculture production.

The foods in Nepal are prepared with the local spices and have their own unique taste. The dishes are tasty enough to make anyone eat the dish again. The foods are easy and fast to cook and are entirely different taste for the visitors. The mouth-watering foods with the best spices will stay in your mouth for a longer time. Here are some of the must-try foods in Nepal that one must try during their visit in Nepal:

Daal Bhat Tarkari is the perfect set to kill your hunger. It is consumed by the Nepalese as their daily meal. The set comes with Daal (Lentil soup), Bhat (rice), Tarkari (curry), Chutney (pickle) and some seasonal salad. The plate also contains the Mashu (meat) and Papad (Thatched Chickpea) if you wish. 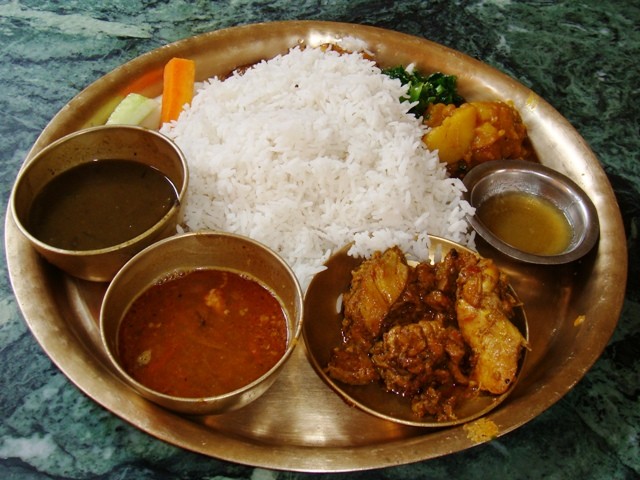 Dhindo is a traditional Nepali food which is mainly popular in the hilly and the mountain region of the country. The Dhindo is prepared by constant mixing of the maize and buckwheat flours in the hot water. The Dhindo is often served with the local vegetable curry, pickle, or Gundruk (fermented leafy green vegetable) soup. The Dhindo also taste best with the local chicken. The dish is very popular among the internal as well as external tourist and is served by most of the restaurants in Nepal.

When it comes about Nepal, the momo is the fastest and the most popular food. The Momos are available in most of the corners of the capital city and popular in other parts of the country. The Momos are bite-sized dumplings which are filled with vegetables, meats, and even sweets. The most popular form of the momo is steamed but it also comes in the other forms like Kothe momo (fried) and C-momo (comes with a spicy hot ketchup soup). The momos are handmade and fresh. 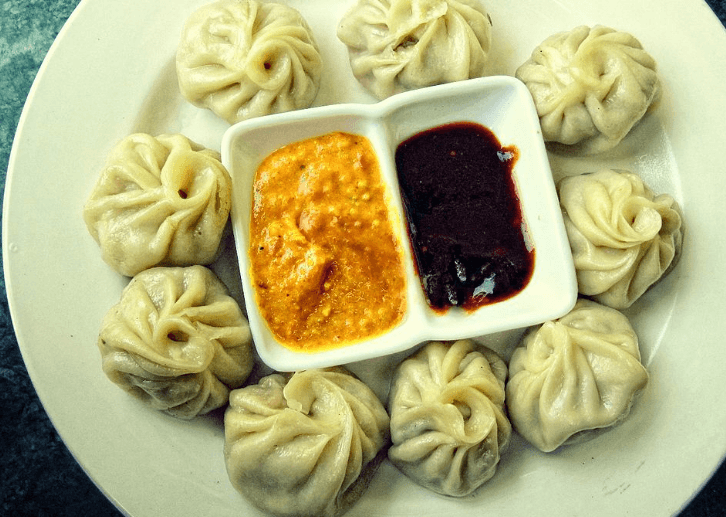 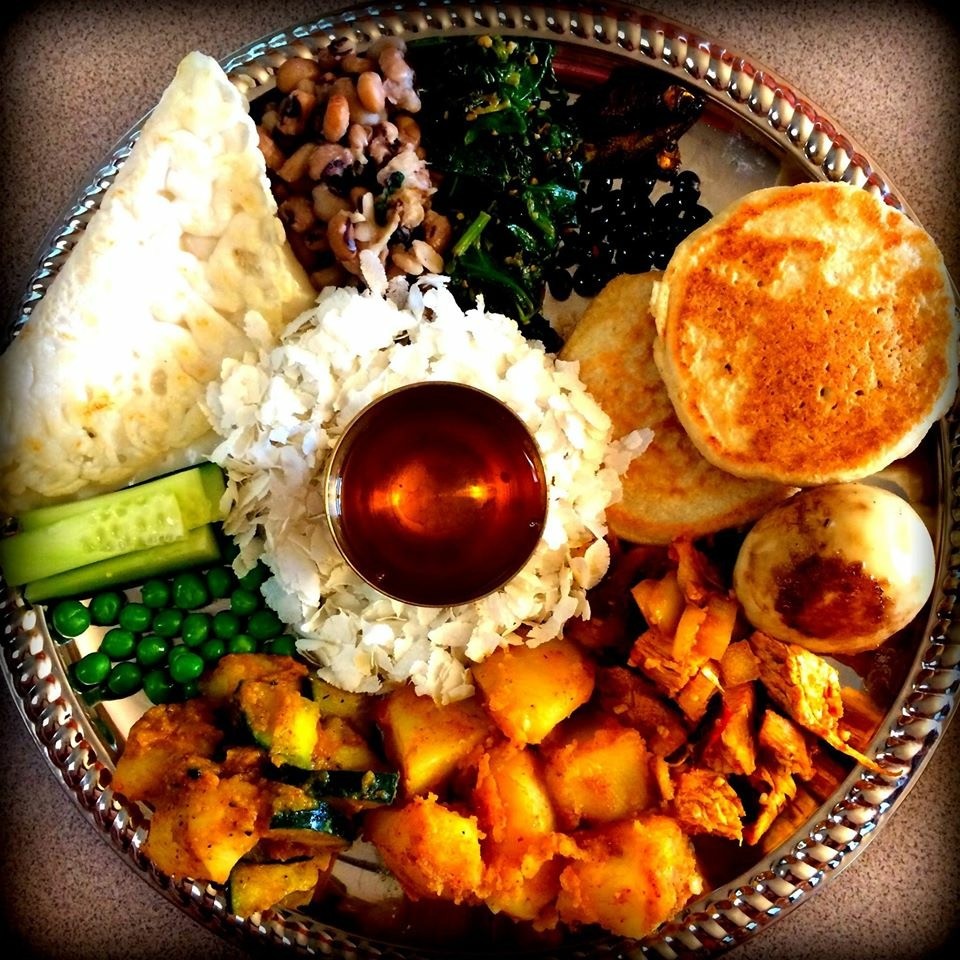 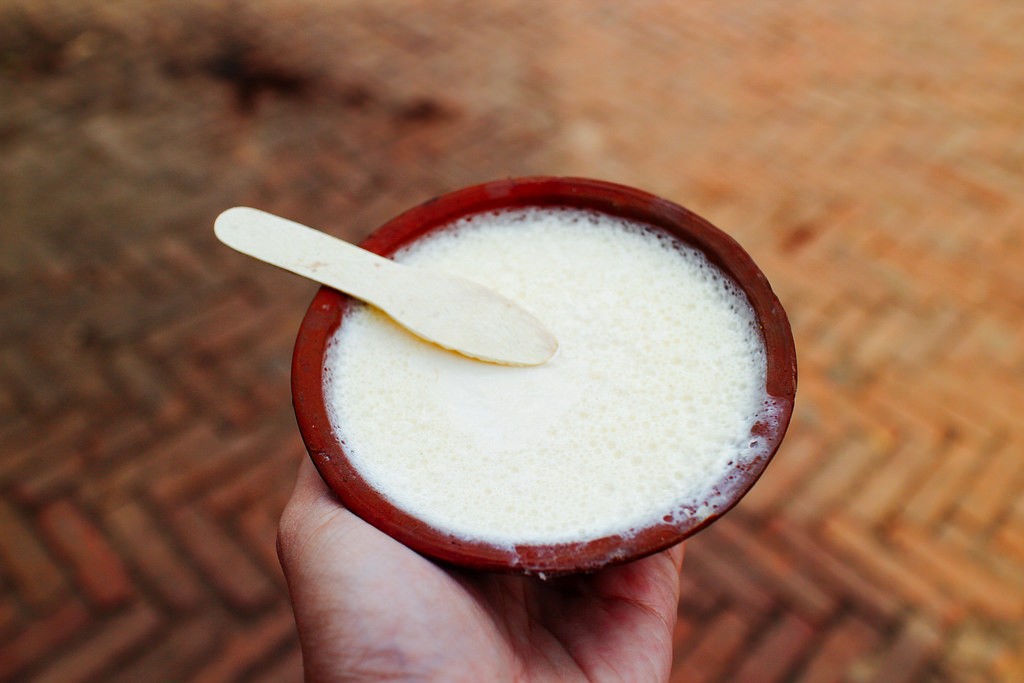 Sel Roti is another famous traditional dish in Nepal. The Sel Roti is specially prepared during the festive season in Nepal. The Roti is made from the rice flour mixed with other ingredients like milk, cooking oil, ghee, sugar, butter, cardamom, cloves, bananas, and others according to personal taste. The well-mixed flour is then poured by the hand on the hot oil in the ring shape. The Roti is turned and deep-fried in the oil until the color changes to lightly brown on both sides. The Roti is sweet and crunchy in taste. You can taste the Sel Roti in the street stalls in the cities and often eaten as breakfast with some curry or yogurt. 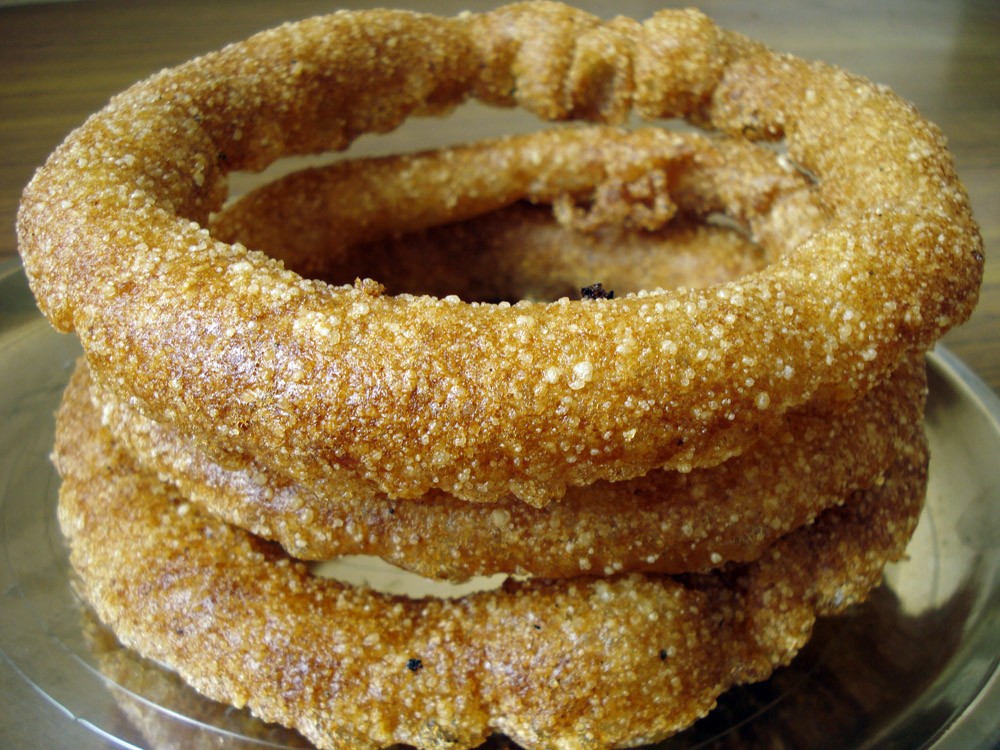 Pani Puri is a famous food of Nepal that is found in almost every street in Kathmandu. If you want to try something spicy in Nepal, then grab a plate of Pani Puri. A plat of Pani Puri comes with the round, hollow, fried, crispy Puri filled with the mixture of boiled potato, onions, green chilies, and noodles. You will get 6 to 8 pieces of puri per plate of your order. You are also provided with the flavored water in a cup or a jug. Pour the water in the Puri and then wide open your mouth so that the Pani Puri fits into your mouth. 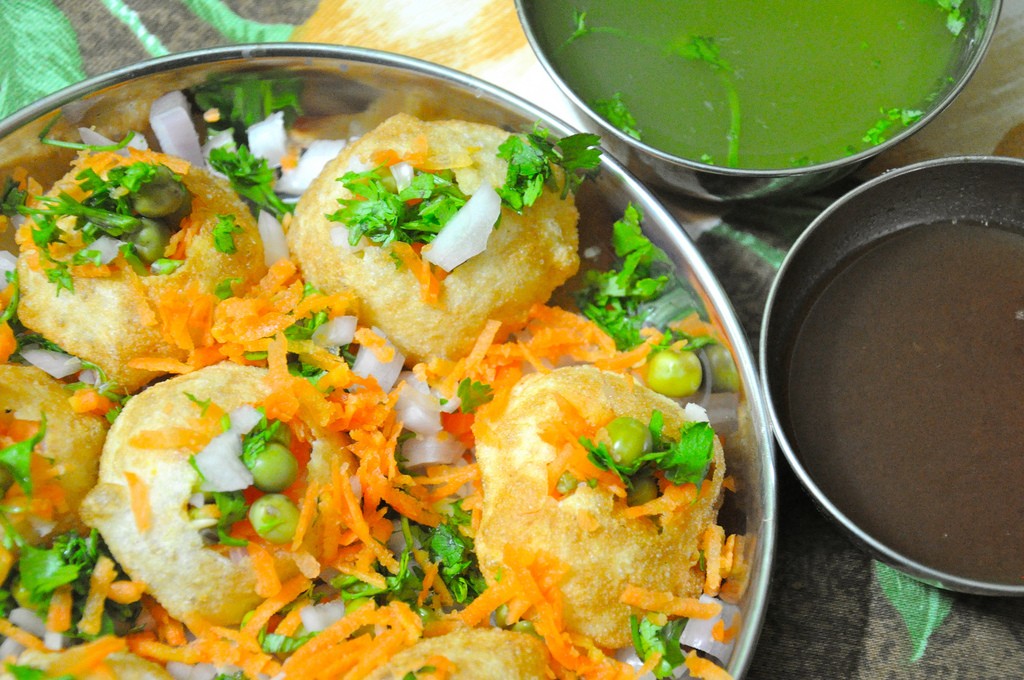 Yomari is another unique dish made by the Newars of Nepal. The Yomari is unique not only in its taste but also in its shape. The Yomari is steamed dumpling  consists of the outer covering layer made from the rice flour and filled inside with the sweet substances like chaku. The Yomari can also be prepared by filling with the Khuwa and finely spiced lentil.  The food is an important part of Newari society and is special during various events and festivals. The shape of the Yomari is representation of one half of the shadkona, the symbol of Saraswati and wisdom. The dish is also said to work against cold. If you are visiting Nepal in cold seasons, then Yomari is perfect.

Yomari is the only food in Nepal that has its own festival. The Newars celebrate the festival during December which they call Yomari Punhi, as a representation of the end of the rice harvest day. 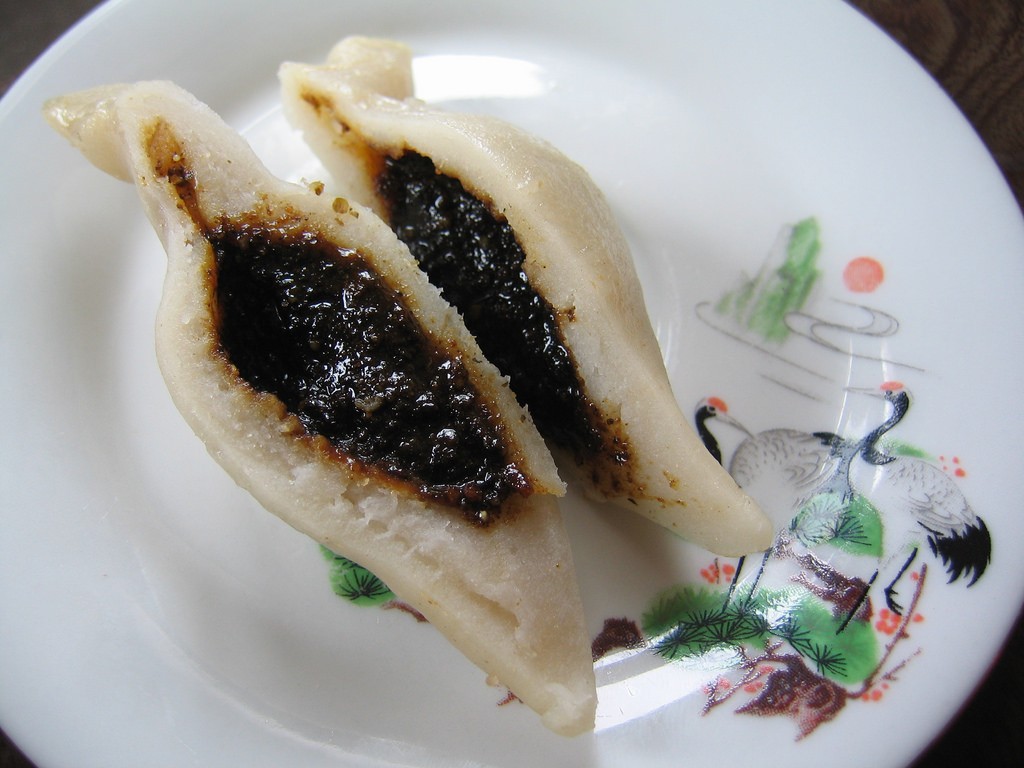 The Lassi is a thick, sweet and delicious yogurt drink. The Lassi is prepared by mixing with sugar and water. The refreshing drink is found almost in the cafes and the streets. However, the water used in the Lassi is something to take care of if you are drinking in the street. There is a famous place to drink Lassi near Kathmandu Durbar Square. The Lassi is served with some nuts on the top of the glass. There is normally crowd gathered around the shop so, it makes take time to come to your turn. 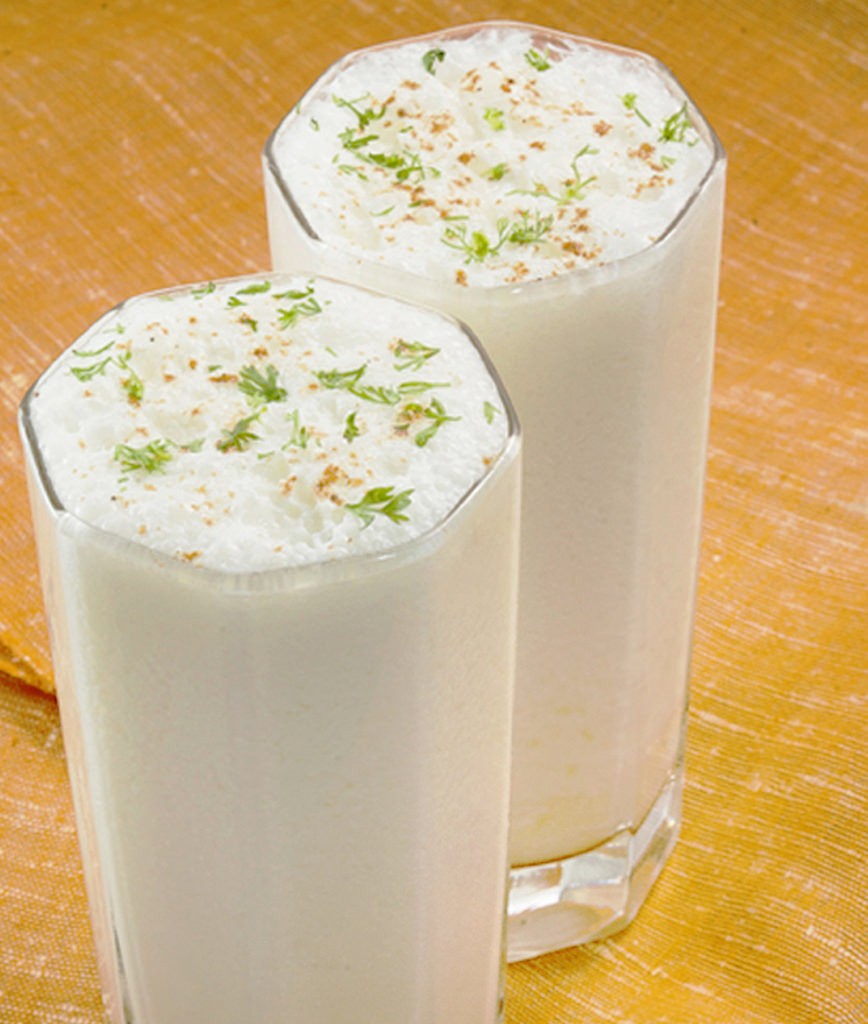 Sukuti is a traditional dried meat food in Nepal particularly a staple dish of Limbu people. The Sukuti is eaten as a snack in most of the Nepali kitchens. The meat is first cut into thin strips by removing the fat. Then the thin slice of the meat coat with the spices, chilies, and pepper and then let out in the sun or hung over the fire to make it dry. After the meat is well dried,  then it is prepared in a pan by mixing with the onions, green chilies, tomatoes, garlic and ginger that add more taste to the dish. The mouth-watering taste is something that will make you lick your fingers. The Sukuti is also served as side dishes such as Sukuti ko achar, with tomato sauce. 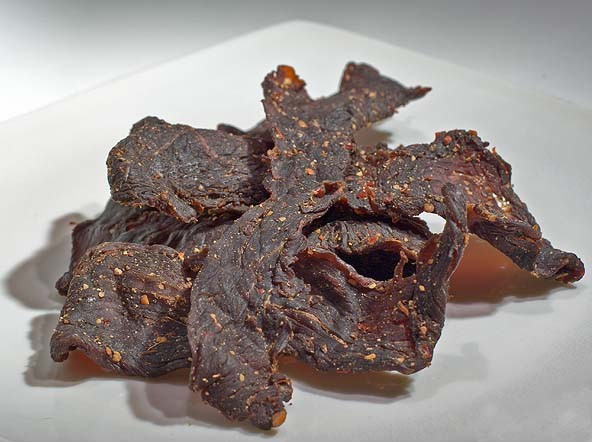 The Thukpa is a Tibetan noodle soup, originated from the eastern part of the Tibet. There are many varieties of Thukpa. The Amdo Thukpa is famous among the Tibetan and Himalayan people of Nepal. The Thukpa is a soup of the noodles which has many other ingredients such as the carrots, cabbage, onion, garlic, and many spices. The Nepalese Thukpa has green chilies, chili powder, masala, and sometimes ketchup which gives it hot and spicy flavor. The Thukpa in the Himalayas will be the best choice of food to beat the cold.  It is also available in the cafes in and outside the Kathmandu valley which can order as chicken, egg, vegetable, mixed or Buff Thukpa. 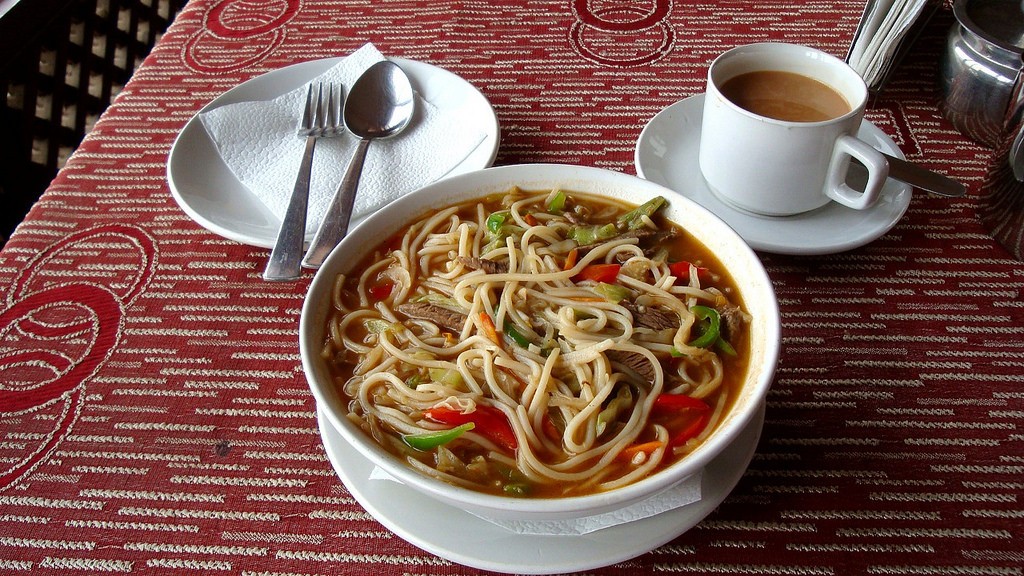