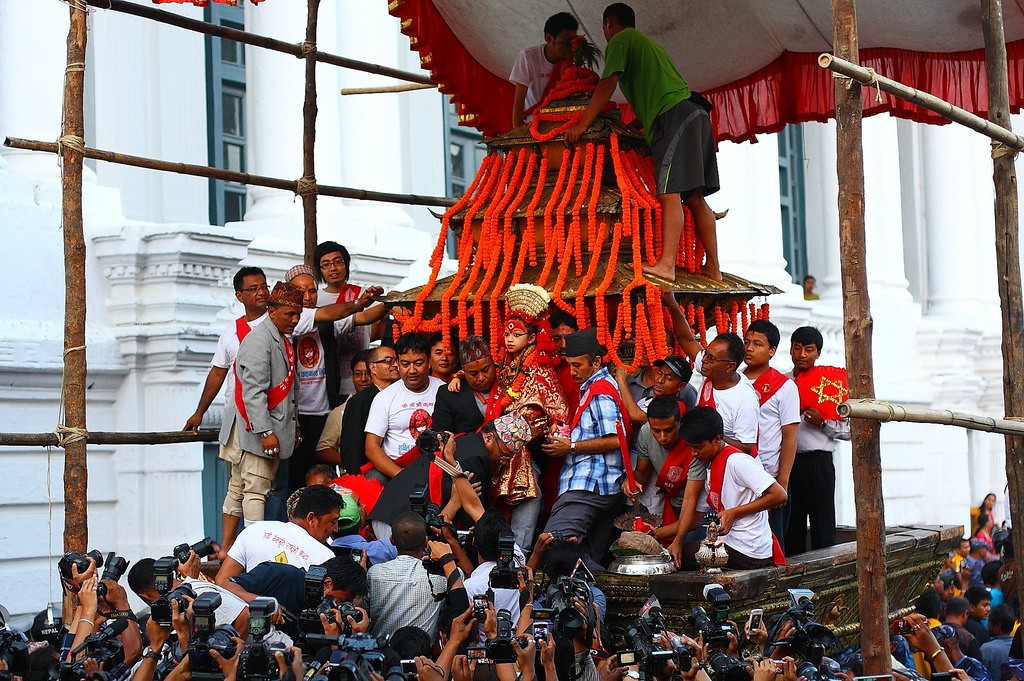 INDRA JATRA: An honor to the King of Heaven

Nepal celebrates many festivals every year that carry certain significance behind their celebrations. The multiethnic and multicultural Nepalese citizens celebrate many festivals which differ regionally or according to the ethnicity, religion,and traditions. From Jatras in the capital of the country to the Chhat in the Terai or national festivals like Dashain, the festivals are the intrinsic part of Nepalese culture. The Jatras are especially popular in the Kathmandu Valley, the capital city of Nepal and are celebrated by the Newar community with great joy, enthusiasm, and belief. However, the people from Bhaktapur, Banepa and Patan also celebrate the different types of Jatra.

Indra means the King of Heaven and god of Rain and Jatra means Procession. Thus, the Indra Jatra is the celebration of thank giving to Lord Indra. During the ancient times, the Kantipur valley was known in the name of ‘Yenya Dey’ and the Newars celebrated the Jatra as ‘Yenya.’ The term ‘Indra Jatra’ was givenlater. Still today, some Newars celebrate the Jatra as ‘Yenya’ or ‘Yenya Punhi’ instead of Indra Jatra. They celebrate the festival by lighting up a Diyo called Dalucha and worshipping the very same Diyo by offering Samya Baji.

The Indra Jatra generally falls on September and is celebrated for eight days. Since the Jatra honors Lord Indra, the lord of rain, the devotees especially farmers, thank Indra for the rain. Other devotees worship ‘Bhairab,’ who is believed to be the destroyer of the evil, Lord Ganesh and Kumari (the living goddess). The festival also celebrates the arrival of the autumn season.

The king Gunakamadeva started the tradition of Indra Jatra to honor the establishment of the Kathmandu city during the 10th century. The Kumari Jatra (procession of the living goddess of Nepal) is also observed on the same day since 1756 AD.

When do we celebrate Indra Jatra?

Indra Jatra is an annual festival that is celebrated for eight days. The festival begins every year from the day of the Bhadra Dwadasi to Ashwin Krishna Chaturdasi. This year the festival starts on 24thSeptember 2018 Monday,and it falls on 12th September, Thursday in 2019.

The legend behind Indra Jatra

According to the legend, the mother of Lord Indra, Dakini, needed Parijat (a white flower) to perform a ritual. Lord Indra descended to the earth in search of the flower for his mother. While he was trying to take the flower, the owner of the meadow caught him and kept him in captivity blaming that he stole the flowers. Lord Indra was imprisoned in Kathmandu, and he was not allowed to go back from there.

After a long-missing of Indra, his mother Dakini was worried and came to earth to look for him. She finally found him and requested to let him go. Only after the villagers realized who they were, they agreed to free Lord Indra but put forward a condition. According to their condition, Lord Indra should come to the earth every year during that very time of the year,and he will be displayed as a prisoner for seven days. Also, the farmers made Dakini promise to provide them with enough dew during the winter for better productivity. The villagers also ensured that Dakini would take the deceased members of their family to the heaven with her.

Thus, the festival of Indra Jatra expresses the gratitude towards Lord Indra and Dakini for the coming harvest in a faith that the harvest will be decent and there will be timely rainfall. Similarly, the festival also remembers the deceased members of the family.

What happens in Indra Jatra?

The erection of the Yosin or Linga in Kathmandu Durbar Square (Basantapur) is the starting of the festival. This event is called ‘Yosin Thanegu.’The Linga is a pole made from pine wood which is especially brought all the way from the forest near Nala, a small town which is 29 km east of Kathmandu. People mainly the Newars gather wearing the mask, sharing the local liquors and perform dances that represent gods and demons during the rising of the Lingo (Pole). Images of Lord Indra, Bhairab and other deities are also displayed.

The devotees also visit various shrines holding the light in the remembrance of their passed member of the family. This event is called ‘UpakuWangu.’ 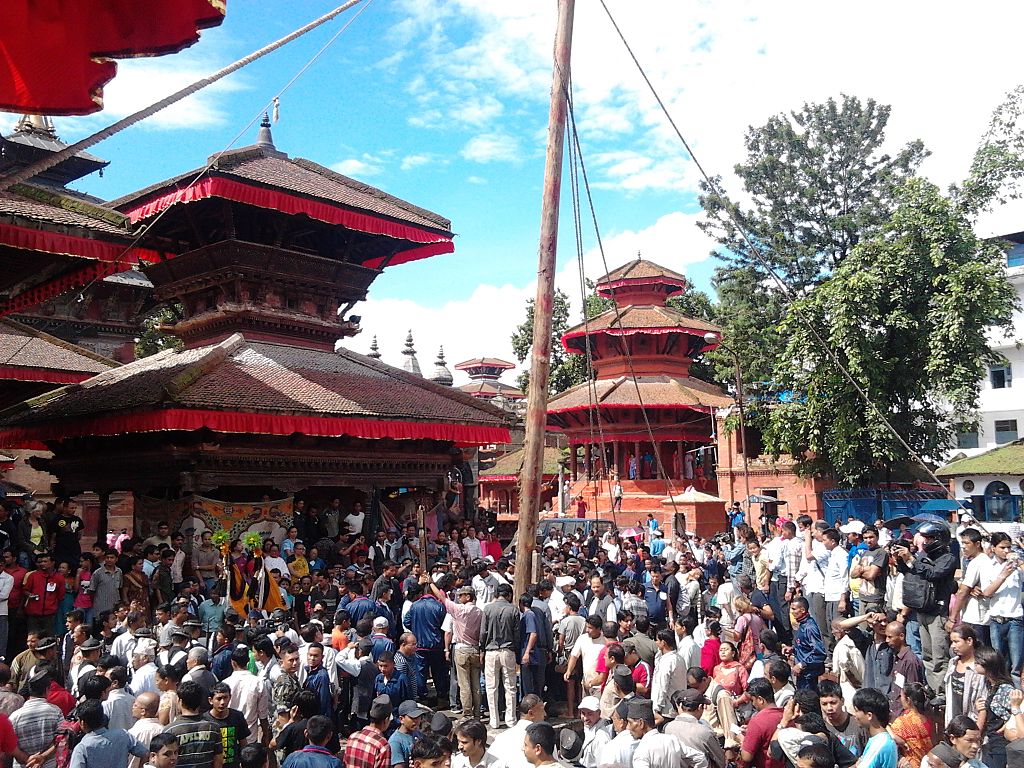 The processions, masked devotees and the dances are the major attractions of the festival. The procession includes:

During the time of Indra Jatra, the chariot of Goddess Kumari is taken out in procession to thank Indra. The street of Kathmandu is full of the devotees performing dances, singing songs and playing various musical instruments like drums and flute. To display the prisoned condition of Lord Indra, the local people in Maru tole construct a stage made of wood and display the statue of Indra with stretched arms and covered by fiber thread. This is a long old tradition being carried out since the Lichhavi Period. The chariot is taken out in the procession around different routes on different days: 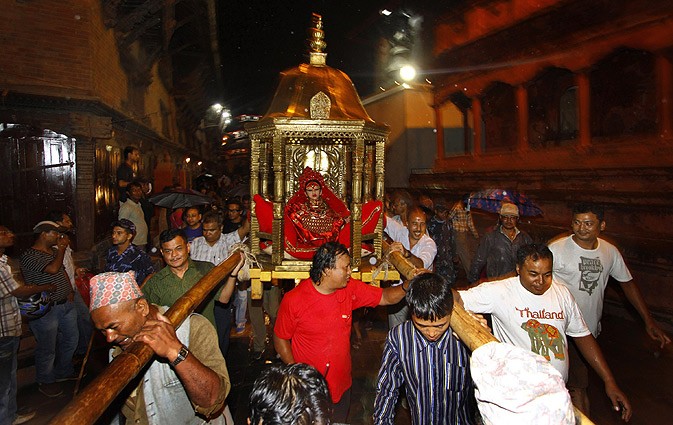 Mata Biye means offering butter lamps. The Newars offer small butter lamps in the memory of their deceased loved ones. The event occurs on the first day of the chariot and follows a certain route. The procession starts at around 6 in the evening and follows the following route:

The Manandhar caste group of Newar community organizes the Bau Mata Procession. During the Bau Mata procession, the long reeds are used to make a representation of the holy snake and then carried out on the shoulder along the procession. The oil lamps are placed on the row of the snake made up of the reeds. The procession starts at around 9 pm from the southern side of the Kasthamandap.

Along with the processions, the exhibitions are also a very important part of the festival. Masks of Bhairab, the manifestation of Lord Shiva are displayed in different part of Kathmandu valley throughout the celebration of eight days. The Bhairab is the terrifying form of Lord Shiva among which Sweta Bhairab at Kathmandu Durbar Square and Akash Bhairab at Indra Chowk are the largest.

Similarly, images of Indraraj Dyah are displayed at Maru near Durbar Square and Indra Chowk. The ten incarnations of Vishnu or Dasavatar are also shown in the steps of the temple in Kumari house every night.

Similarly, the Samay Baji (sacred food) is displayed in Kathmandu, Bhaktapur and Patan. The food contains various elements that represent the lock, health, prosperity and longevity. The Samay  Baji consists of flattened rice, puffed rice, fried black soybeans, ginger rhizomes, marinated boiled meat, dried fish fried in oil, boiled-fried eggs, fruits, lentils and several other items and local Newari white wine (aaila). The elements of the Samay Baji are beautifully kept in display during the Indra Jatra. Hundreds of devotees come to observe the Jatra, offer the Samay Baji to Kumari, Lord Ganesh, and Bhairab. At the end of the day, the Samay Baji is distributed among the devotees as an auspicious blessed food (Prasad). 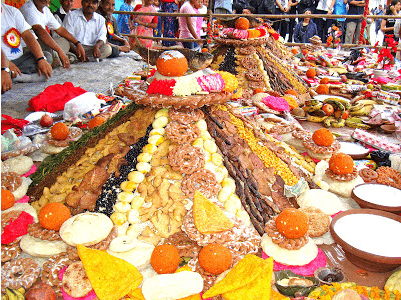 The Lakhey is one of the most interesting dances performed by the Newar community in Kathmandu. The word Majipa came from the word Manjupattan which means ‘the city established by Manjushree’ and Lakhey means a carnivorous demon and thus meaning to ‘the carnivorous demon of Majipa.’ The Lakhey dances in the music and moves ahead in the procession. 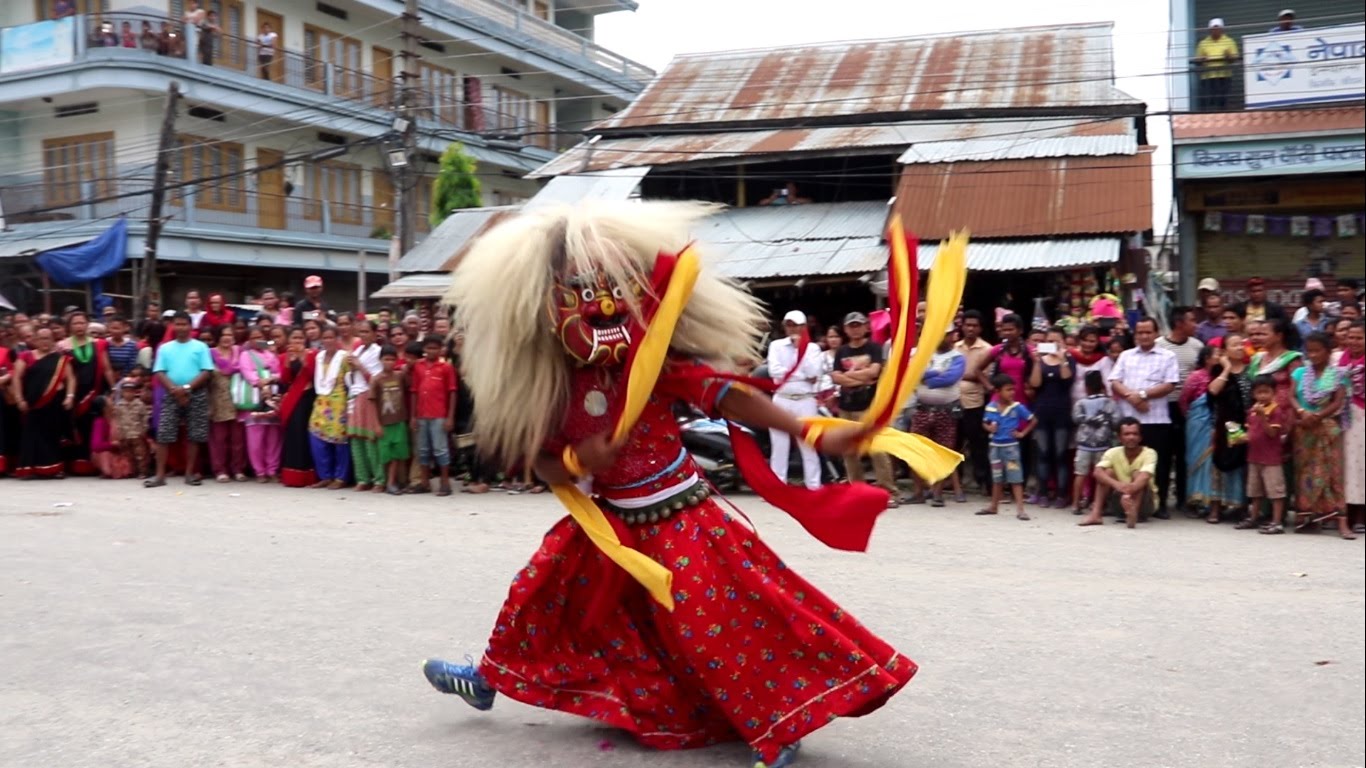 Pulu Kisi is the elephant in Newari Language. The elephant is believed to be the carrier of the Lord Indra,and thus the dance of the elephant is celebrated with rejoice. The people prepare the white elephant structure, and the young boys carry the structure along the streets of Kathmandu. The elephant roar and does some mischievous things from time to time and swing the tail which is funny to watch. 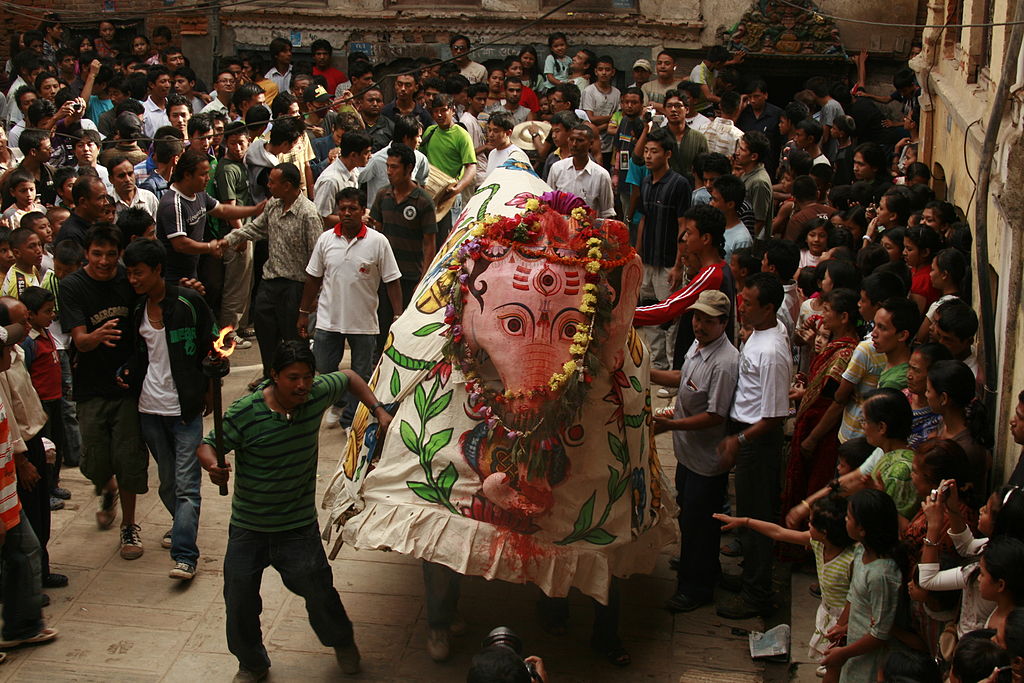 The Sawa Bakhhu Dance is performed by a dance group in Halchowk. The dance continues along the festival route, stops at the junctions and receive an offering from the devotees. The dance is characterized by the Bhairab (in Blue) with a sword and two attendants (in Red).

Devi Pykhan is performed at Kilagal, Hanuman Dhoka, Jaisidewal, Bangemuda, Indra Chowk, and Kilagal. Dancers wear the mask of different gods and goddesses such as Bhairab, Kumari, Chandi, Kawan, Beta and Khya. It is believed that this dance is performed for the peace to people suffering from diarrhea.

The Mahakali Pykhan is performed at Bhaktapur in Durbar Square and the streets of the Kathmandu. The characteristics feature of the Mahakali dance is the representation of the Khyah, a fat, hairy ape-like creature. The dance performed is full of fun and humor with a lot of falling. 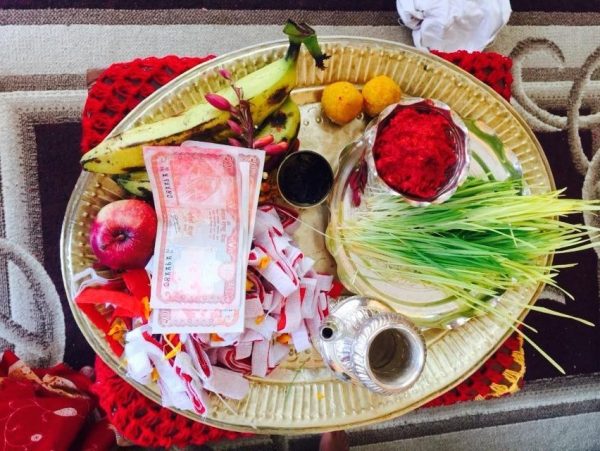 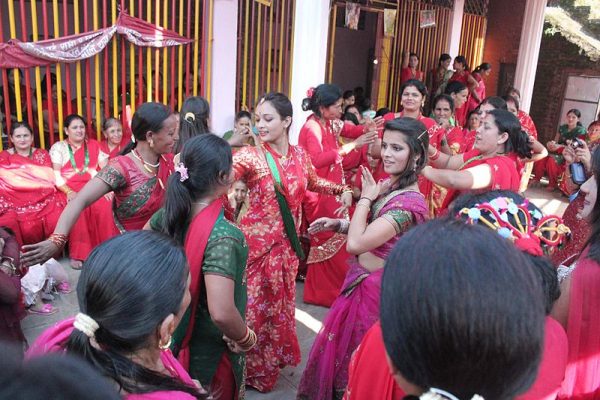