Janakpurdham: the birthplace of Goddess Sita is a popular tourist destination of Nepal in Terai plain. Janakpurdham is the headquarters of the Dhanusa district in Nepal. Among the various places in Nepal with religious importance, Janakpurdham is the place one should not miss to visit. The city is a center for religious and cultural tourism.

Janakpurdham lies 123 km (76 mi) south-east of the capital city of Nepal; Kathmandu. The city was founded in the early 18th century and still is the largest Sub-Metropolitan city of Nepal. Janakpur is ranked as the third-largest city in Terai (after Biratnagar and Birjung) and the seven largest cities in Nepal.

Janakpurdham was the capital of the Videha dynasty that ruled the Mithila region in ancient history. The name of the town came from the name of King Janak who used to rule the Mithila region. Janakpurdham is now very popular as a religious destination for domestic as well as international tourists. The ancient temples, monasteries, arts, and crafts of many deities are the attractions of the place.

Janakpur is also the birthplace of Goddess Sita. According to Hindu Mythology, King Janak found a baby girl under the soil while he was plowing the field. The girl was later known as Goddess Sita and taken as a “The Daughter of Mother Earth.”  Sita is taken as an ideal woman by all the Hindus. Adding on this, Janakpurdham is the place where Lord Ram and Sita were married. Thus, every corner of the town reflects and represents deities related to Ramayana; the story of Ram and Sita.

The Maithili people are the principal inhabitants of the Janakpur city. They speak their own language and are very famous for their art. The most common languages spoken in Janakpurdham are Maithili, Nepali, Bhojpuri, and Awadhi. The major festivals celebrated in Janakpurdham include Ram Navami, Vivaha Panchami, Holi, Bijaya Dashami, and Chhat. 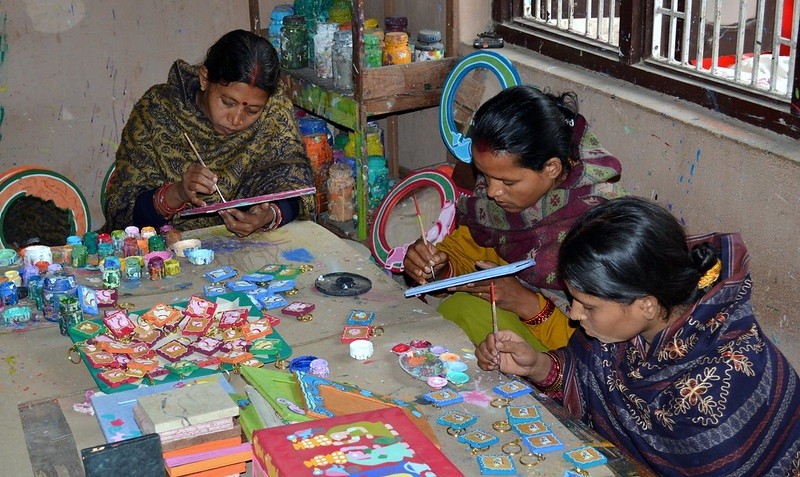 The Mithila art practice has been practiced by the women in Mithila back from the 7th century. The painting is done by the fingers, twigs, brushes, nib-pens, and matchsticks. The paintings use natural dyes and pigments and have special eye-catching patterns.

In ancient times, Mithila art was a part of decorating the houses during the festivals. The village huts were beautifully painted by the locals that reflect abstract patterns or some visuals of the village life. Still today, the houses in the Janakpur are found to have painted walls. However, in recent days, art practice has changed a little. The paintings reflect the contemporary life, especially of females. The arts beautifully convey the lifestyle of the rural women where they were deprived of education. Also, art is a beautiful reflection of the stages of female life that includes work, marriage, childbirth, and social networking among the village women.

The Mithila paintings and the artworks are now becoming highlights all across the world. The paintings are on one hand making the Mithila culture famous and on the other hand, is a support system to empower the women in rural communities.

Janakpurdham is rich in terms of culture and religion. Particularly famous for Goddess Sita, the place holds other important sites of religious importance. The Janaki temple is a major attraction of the area. The Ram Temple, Vivaha Mandap, Sankatmochan temple, Ratna Sagar temple, Dulaha temple, and Mahadev temple are other famous places to visit in Janakpurdham. With all these places within the city, Janakpurdham is also regarded as the living museum.

Janakpurdham is surrounded by rivers like Dudhmati, Jalad, Rato, Balan, and Kamala, and is especially famous for the temples and ponds within the area. Here are some of the major attractions of Janakpurdham. Consider these places for sure while you make a visit to Janakpur:

According to the legends, in 1657 a golden statue of Sita was found in the spot where the temple stands today. The people also believe that King Janak worshipped the Shiva Dhanush on this site.

The Janaki temple is a wonderful piece of art that resembles the Mughal places of India. The temple is three-storied, 50 meters high and expands over an area of 4,860 sq feet. The large temple is made by the stone and marble and is decorated beautifully by the colored glass, engravings, and the paintings.

The Janaki temple has the idols of Ram, Sita, and other deities. The devotees gather around the temple in various festivals like Ram Navami, Vivaha Panchami, Chhat, Holi and other festivals.

The Ram Mandir is the oldest temple in Janakpurdham. The temple is built in the classic pagoda style and dedicated to Lord Rama. Inside the temple, three are shrines of Shiva, Hanuman, and Durga. In the evening, the devotees perform religious music in the temple which makes it the busiest part of the day. Large fairs are observed around the temple during the Ram Navami festival.

Ram Sita Vivaha Mandir is another important tourist place in Janakpur. This is the temple where Lord Ram and Sita were married. The temple is built in traditional Nepali style and reflects the life-size statues of Ram and Sita inside it. The temple also consists of the statues of the brothers of Ram.

Among the various ancient ponds in Janakpurdham, the Dhanush Sagar, Ganga Sagar, and the Parshuram Kunda are extremely sacred. The former two ponds lie near the Ram Mandir where people perform religious rituals in the mornings. These ponds are believed to be built by King Janak in anticipation of the arrival of the gods after the marriage of Lord Ram and Sita.

The Parshuram Kunda is believed to be the pond where Maharshi Parshuram bathed to rest his anger after Lord Ram broke the sacred bow of Shiva. The pond lies 4 km west of Dhanushadham.

Dhanushadham lies 18 km north-east of the Janakpurdham. The Dhanushadham is famous for being the place where the broken remains of the divine Lord Shiva bow fell after Ram broke it. Legends suggest that Ram was married to Sita only after he was able to break the bow. The pieces of the broken bow were believed to fell here in Dhanushadham. A fragment of the broken piece is still believed to be stored in the place.

In Dhanushadham, a fair called a Makar Mela is observed every Sunday during the month of Magh (January/February). This tradition of observing the fair is believed to be continued since the Vedic times. Thousands of pilgrims pay a religious visit to this site. 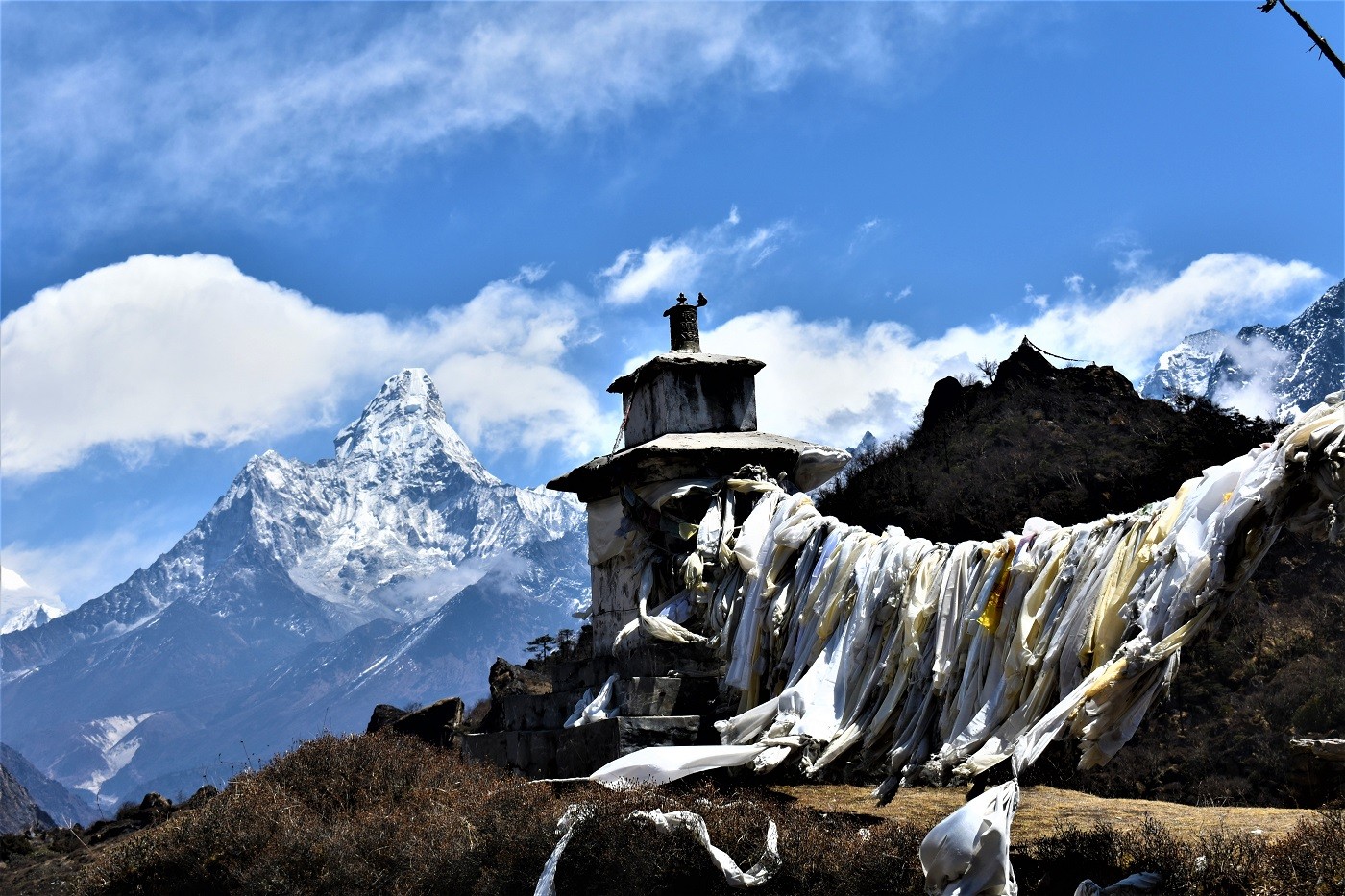 Top 20 Things to do in Nepal